My recent business with passports has gotten me thinking more closely about them, specifically about the central ingredient: the photograph.

Together with the mugshot, the passport snapshot was the earliest application of photography as purely personal identifier. It's sole purpose has always been to objectively depict a visage. Because nothing else about the photo is meant to be important, passport photos have become standardized to the same size, shape, background, and facial expression. No smiles are permitted. Even with these restrictions, or maybe because of them, each passport photo offers insight into its era. 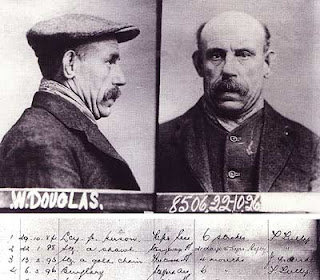 Mugshot, 1884
Passports have been in use for centuries but weren't commonly required until 1918 when they became mandatory for international travel. Photographic prints were in wide circulation by this time and so they became an essential ingedient. The shots were of course black and white and bore the somewhat fantasized tint of the period's studio portraits. They identified, but in an idealized fashion. The photos were loosely attached with staples and stamped along with the document to discourage forgery. I think the staples along with the beautifully handwritten information give these old documents a very physical and authentic presence. 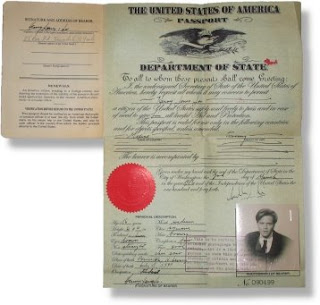 Passport, 1916
By the 1920s, the softly diffused border made way for a completely filled rectangle which carried the photo into a slightly more documentary tradition. Photos were glued instead of stapled. 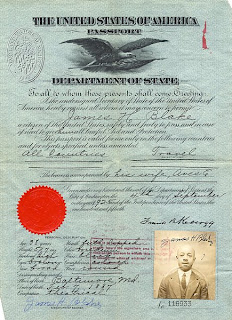 Passport, 1925
By the 1930s the emphasis shifted to the face as the utilitarian nature of the passport picture began to usurp the received importance of background. 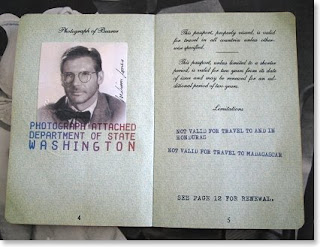 Passport replica, 1935
Walt Disney's passport from 1965 is interesting. He was allowed a smile, perhaps in deference to his contributions to general happiness, or else through sheer force of character. 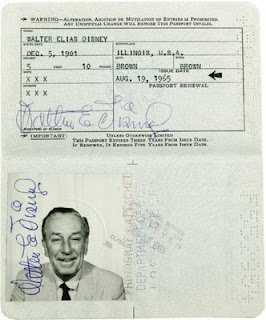 Passport, 1965
This passport from a few years later is more typical. The smile is gone and the cropping has tightened on the face. As was common for a brief period of portraiture in the 1960 (reviving an historic tradition), the subject is angled to the lens and looking off-camera. 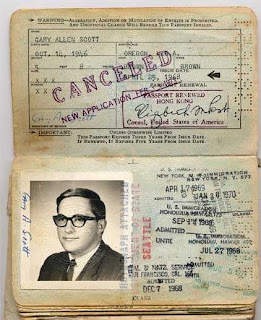 Passport, 1968
By the mid 1980s this effect had been corrected. The head size, expression, and direction of gaze had been molded into the standardized style still in use today. Glue has been replaced with a full lamination of the photo page, which might be seen as a very low tech art glazing. The other radical change was the transition to color probably in the late 1970s which substantially increased the identifying accuracy of the photograph. 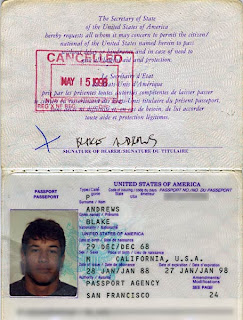 Passport, 1987
Things stayed roughly the same for next few decades. Passport portraits were offered as a service in specialty shops and sold as 2 x 2 Polaroids to be inserted physically into the passport itself as they'd always been. Meanwhile, passport portraiture had transitioned from a formal event into a five minute errand. As this example shows, very few people put on a suit and tie anymore for their passport photo. 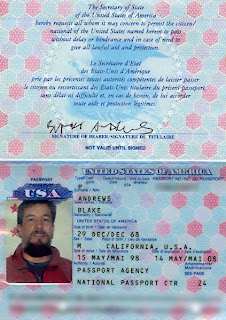 Passport, 1998
One could make the case that by the late 1990s passport photographs had generally advanced in their fealty to reality. That is, they'd become fairly honest identifiers. Which brings us to the present. 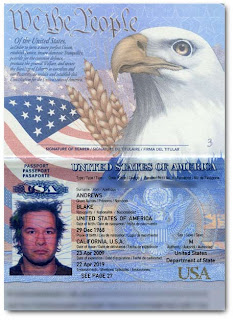 Passport, 2009
No longer does the passport contain a laminated print. Instead the entire page/photo has been digitally generated. While this may guard against forgery, the image quality suffers horribly. Tonality across the face is diminished. A security watermark runs across the forehead. More importantly, the magenta cast of the photograph is so strong that its ability to identify the bearer is compromised. Compare my 2009 passport to the 1998 version to get a sense of how inaccurate it is. For a photograph whose sole function is identification, this seems like a step backward.

Certainly idea of the photograph as a physical object with some authenticity or history has been erased. It not a loose scrap item to touch with one's fingers behind a staple or lamination. Now it has been completely embedded in the document along with various microchips. It's halfway to being a thin computer, and indeed it brings up the question of whether the document is even necessary. The world has moved beyond papers and prints. Any passport photo can probably be brought up on a monitor just as easily as carried in person. At the rate things are changing, who knows if passports will be around in 20 years? They may become artifacts of the "print era", along with the vast majority of other photographs that used to be printed but are now seen only on screens. 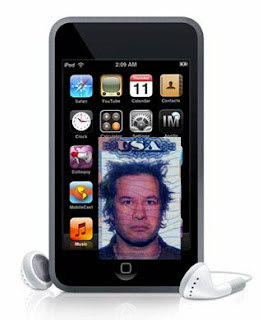 Passport, 2030?
When and if we reach that point passport photos will be a barometer of broader societal patterns, just as they've always been. As identifiers of societal mores they will be quite accurate. But as personal identifiers, I suspect their heyday may have passed.
Posted by Blake Andrews at 8:37 AM

Hey Blake. great piece on our passport photos history - well written! Don't know if you stumble upon us but with the advent of broadband and digital photos, we help with people make their own passport photos. Give us a try and see if we'll make it into history!
cheers,
Tom Green

"As this example shows, very few people put on a suit and tie anymore for their passport photo."

very few people put on a suit and tie anymore for anything!

Hello. I recently watched a crime investigation piece on a local news station in which they showed a passport photo from the mid-70s. The opened passport showed a photo that had the mother holding a toddler on her lap. She was sitting. This seemed odd. Were two people ever allowed in the same photo, as in mother and child?

By the way, there isn't a 'Visual verification' picture for me to type the characters for.

Never-mind my post-comment about not seeing the 'Visual verification.' I had www.blogger.com's cookie blocked.

I'm not sure about the two person photo. That seems odd but I suppose it's possible.

@Rick - About the two person photo... Yep, not just possible, but common.

In the 70s it was normal almost everywhere in the world for a baby to not have their own passport, but to be listed on one of their parents' passports (usually the mother's).

My mum still has her passport issued in 1977 that is a laughing portrait of her with a fat giggling baby on her knee (me :-).

Gary, do you know the last year black and white photos were allowed for US Passports? Interesting blog. I just scanned all my passport pics to compare and they're cheaper and crummier looking every time.

By the way, I just had a picture taken to renew my passport and the photographer encouraged me to smile. The application has no language about not smiling in the photo, so I believe that requirement must have changed.

I always try to take my passport (and DL, etc.) with the most twisted insane look on my face that I can. Try it.

A simple pasta strainer adds a touch of class to any official portrait:

Where can one find some information on US issued passports, say London of 1815?

Why is Indiana Jones' passport included in the US passport history?

And how does the Indiana Jones passport fit into the US passport history ?