The cover of last week's New Yorker was a nice homage to the great Lewis Hine. 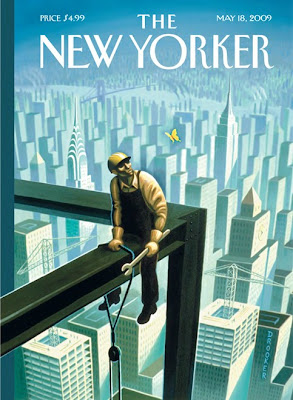 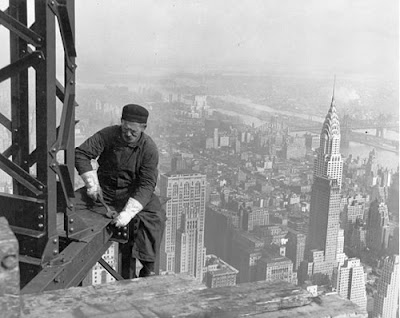 Empire State Building, 1931, Lewis Hine
Made shortly after the 1929 stock market crash, Hine's photo must've been seen at that time as a symbol of hope. The heroic worker builds a foundation, then lifts himself by his own bootstraps. The tone of Drooker's image seems darker but the message is similar. In the midst of tough times there's room for optimism.

If the New Yorker is any barometer of art tastes photography is on the ascent. The Drooker issue features 8 art blurbs, half of which review photography. You'll need to go back several months to find an issue in which the majority of the art reviews are not about photography. Half a century ago only one non-museum in America showed photographs. Today we've conquered the art world. We've built the foundation and lifted ourselves up close to the sun. There's room for optimism, so long as we don't forget it's a long way down.
Posted by Blake Andrews at 7:47 AM