"In October 1970 Winogrand was at the Rochester Institute of Technology, New York, showing slides, taking questions from the audience. Someone asked him about Frank's photos of the American flag. Winogrand said that they didn't interest him much. He preferred to talk about the picture of the gas station that Frank had photographed near Santa Fe, New Mexico. It's a picture of five 'Shamrock' gas pumps against a nondescript landscape. Looming over the pumps is a sign with the letters S A V E illuminated and the intervening ones — G A S — barely visible. 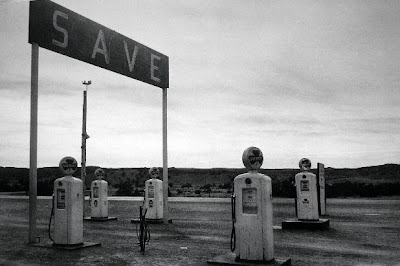 That's all there is, but, for Winogrand, the fact that it's 'a photograph of nothing', that 'the subject has no dramatic ability of its own whatsoever', makes it 'one of the most important pictures in the book'. What amazed Winogrand was that Frank could even 'conceive of that being a photograph in the first place'. Quizzed by his audience Winogrand rambled on about other things but then came back to 'that gasoline picture'. The important thing is

—excerpted from The Ongoing Moment by Geoff Dyer, Pantheon Books, 2005
Posted by Blake Andrews at 7:34 PM