I saw the Oliver Boberg show at Quality Pictures yesterday. At first I didn't think much of it. Huge color prints of subdued industrial sites --very German-- selling for tens of thousands of dollars, the same crap you see more and more of as photographers attempt to please nonphotographers. But after reading the description the whole show turned on its head. He had created these scenes as models, then photographed them to look real. And believe me, they looked quite real. 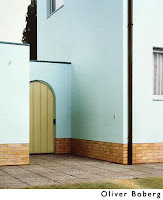 The lighting was just right, very outdoorsy. I had to closely examine several of them before irregularities started jumping out at me. Twigs and leaves looked a little off, texture of walls was fudged, etc. But overall, kudos to him for creating his own brave new worlds.

I suppose this show is the counter to a trend that's been popular in the photo world recently, which is to shoot distant scenes using a severely tilted large format camera so that just a very small slice of the frame is in focus. Since up close macro shots often have narrow depth of field, the effect is to make real scenes look like smallscale models. It's the opposite of Boberg: instead of creating models that look real, these photos make reality look like a model. 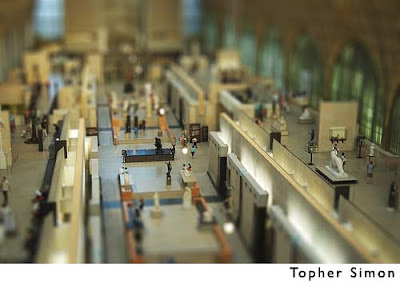 In both cases the grand old photographic question comes up: What is the relationship of the photograph to what is depicted in the photograph? It's the question that makes photography photography, and don't expect any clear answer to it. An interesting thought experiment is to ask what if Boberg had used digital methods to create his worlds instead of real models? He could cut and paste real photographs to create montages that would probably look more "realistic" than what he has achieved with models. Instead of being very close to real looking they would be indistinguishable from reality, and in fact many people follow that course creating worlds in photoshop. What makes Boberg's photos different is that they depict the real world. Even if it's just a simulated model of the world, at least the model itself is real. With digital montage that connection is kaput. But what if you created the digital montage, then took a photograph of your computer screen with the image on it? Wouldn't that depict a real scene? In this case you could argue that a photo of something could be more "real" than the scene itself. As I said, don't expect any clear answers, at least not from me. From me just expect latenight ramblings.

The other interesting show I saw yesterday was Carly Bodnar's work at PSU's White gallery. These were extreme closeups of rotting fruit that I found quite interesting. Very visceral images. The textures seemed nearly human, and could probably pass unnoticed in a collection of Ann Mandelbaum human body part photos. Sadly, as is often the case, the artist statement was a complete load of shit illuminating nothing and darkening all sorts of things.

Those two galleries are on opposite ends of downtown Portland. Walking between them I shot 7 rolls of HP5.
Posted by Blake Andrews at 6:55 AM