My old N90s has started working again. It sat broken in a drawer for 2 years. I pulled it out the other day hoping to salvage the strap and it worked. Great. So that's what I've been using the past few days. I took it to Zane's soccer tournament yesterday. I keep a 50 mm f1.4 lens on it which for me is like a telephoto. Looking through the viewfinder feels like tunnelvision compared to my Hexar. Where the thing really shines is for low light portraits. The camera feels heavy. It feels real. The shutter makes a clunk-whirr which feels like you've done something.

At this point many of you may be wondering "there are still folks out there shooting film?" Yes. As the digital age wears on, I periodically ask myself why don't I switch? I'm a bit like a musician who refuses to record on cd and only produces records. But usually the act of asking "Why?" reaffirms my attachment to film. I have a little digital camera. I make snapshots with it. I download them to my hard-drive. I look at them there. I rarely print any of them. They exist in a heavily mediated state. Meanwhile binders of old negatives 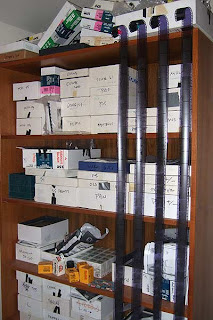 surround the walls of my office in a very tangible way. If I knocked a binder to the floor it would probably sound like whirr-clunk.

Stephen Shore says that when he did his large format color negatives in the 70s, each sheet of film cost several dollars. Before making an exposure he really had to think about it. Was it worth it? Would it be a keeper? One perspective on the digital age is it has freed us from that restraint. You can shoot as many digital images as you want until you get it right, and see the results as you shoot them, at virtually no marginal cost. Theoretically this should be a benefit. It should reward experimentation, lower the barrier to fine art, etc. The other side of that --the side I find myself leaning toward-- is to say, maybe there should be a cost to each photo. When each negative is virtually costless, what does that say about the value of each image? Shore's example is an extreme since most 35 mm film is much cheaper than what he was using, but the point holds. Perhaps an exposure should require a little labor of love, a little expense, a little pain in the butt. Perhaps convenience should not be the sole characteristic on which everything in the world is judged.

As I write this I'm thinking about an image by my friend Faulkner Short that I saw for the first time the other night. It was taken with a Minox camera on the last frame of the roll. The sprocket holes run right through the photo, and he's printed it as if they were part of the original scene. Who knows. Maybe they were. There's probably some Photoshop filter called "Sprocket Hole" which would duplicate the effect but somehow an image created that way would feel lighter, not as heavy.
Posted by Blake Andrews at 10:44 AM