Morning Blake:
Happened upon your web-site this am after searching for 'Wildlife photo
analysis'.

I have an old 'Rocky Mountain West COLORADO' Magazine dated May/June 72
& was scrutinizing a particular full page photo of two young hikers & after scanning
this photo & enlarging it, I think I see a snake in the lower right side of this photo.
The hikers are, in my opinion, in close proximity to this snake (unk. species) and
in danger of being bitten...all this unknown to the photographer & the hikers.
I would ask you to closely analyze this photo & determine if this is, indeed, a snake
or just my imagination.

Thanking you in advance ! 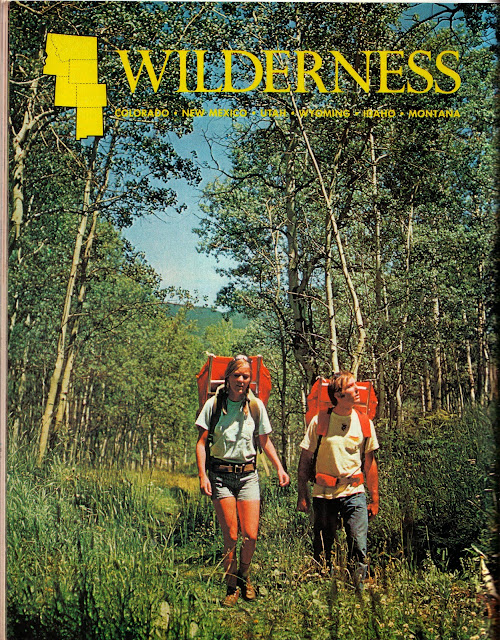 I don't see a snake, but it's hard to say for certain it's not there. If you want I could share on the blog to see what others think. If you stare at any photo hard enough, unusual items sometimes appear.

Thank you for such a rapid response...the particular spot on photo is at very


bottom right...there is a curving snake-like appendage that ends in what I think is a snakes head looking at you (or the photographer). The appendage appears to have


a pattern on it, much like snakes will have.
Hopefully I'm not reading too much of my own opinion to this photo.
Please feel free to share this photo on blog...many eyes are better than my own. 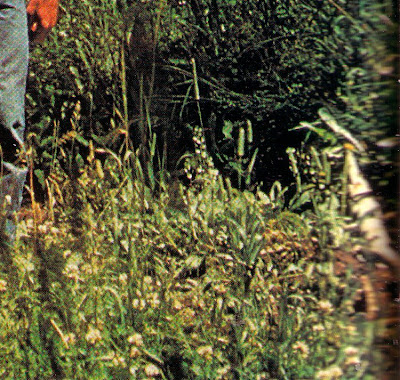 
I've shown it to some photo friends and I'll see what they say. In the meantime I'm curious what is the reason for your concern with the snake? Maybe the couple was in risk but the photo is 40 years old, so they're now out of danger. Just curious.

Not too long ago, an old pal & his wife were on an atv ride in the San Juan Mountains in Colorado, on a trail that we had had jeeped & hiked since the early


1970's to Heart Lake, close to the Rio Grande Reservoir. They stopped for a snack on  'Lost Trail Creek' & took photos. Later e-mailed the photos to me.


I closely analyzed the photos since on a hike in 2011, my pal (Paul) & I stopped
at that same creek crossing & observed bear tracks in the snow patches (late
Oct.). Tracks appeared to somewhat fresh ???  A couple of hrs. later we saw a large pile of definitely fresh scat on same trail we had just walked over earlier.
Obviously some animal was relishing a hearty meal of a couple of old guys (late 60's & early 70's in age).
Anyway...here are several photos of Paul & his lovely wife, Priscilla, at that crossing. Look carefully at photo of Paul eating his snack...look at the bush across the creek, the smaller one on right of the larger one in center. Look at the lower right on that bush. When I pointed out what was by that bush, Paul let out an
expletive of surprise.  These animals are truly curious.  If you enlarge the photo
you will also see whitish bones on ground behind Paul's feet...on the right rear.
He did say that he & Priscilla saw the bones...didn't think much about them at the time.

Let me know what you see.

PS: Since that time, I look very closely at photos taken in a Nature setting.
I'll scan them & enlarge to the point where fine details will emerge.
Hopefully, the two hikers have had a wonderful 40 + yrs. of life & continue
to do so. 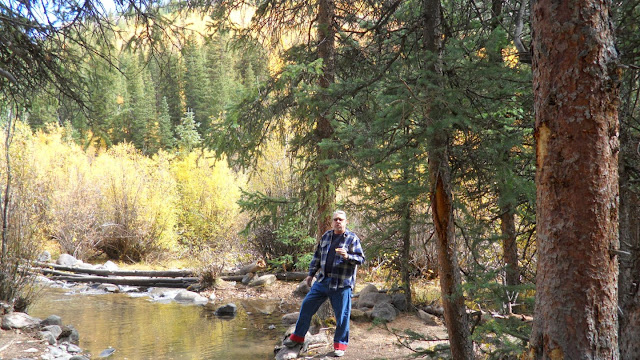 Can't be sure but I'm pretty sure it's a large coyote or possibly wolf. Which would explain the whitish bonbons.

Many Thanks Blake for your imput...Paul & I thought that it looked more like a grey


cat w/ ears laid back. Not sure though!


This photo is of Priscilla, Paul's wife,...same place, same time. If you will look
between the two trees that priscilla is leaning against, across the creek, you will
see two large boulders...go up approx. 2-3 feet & over a foot or two. There appears to be a dog, wolf or whatever behind the bush, at ground level, staring
at Priscilla.
What do you think?  Got to enlarge the photo somewhat to see mre clearly.
Also...please feel free to place these photos on your blog...we may get to the bottom of this yet.
Many thanks again! 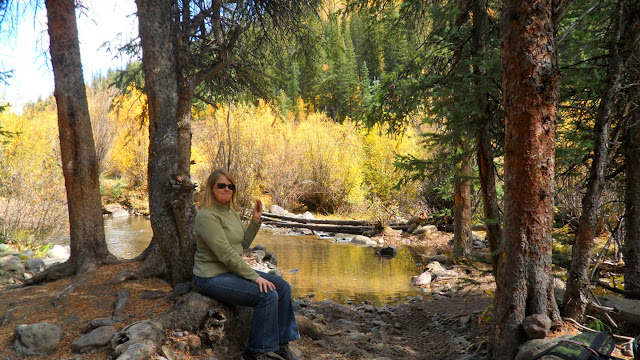 Looks like a female timber wolf, I'd guess around 5 to 7 years old. You often find them in snake country, especially in recent years as warming ecosystems take on more southerly characteristics. But don't be alarmed. Pricilla is doing exactly the right thing in this photo by remaining solitary and giving herself good tree access. I'm sure she escaped without incident. 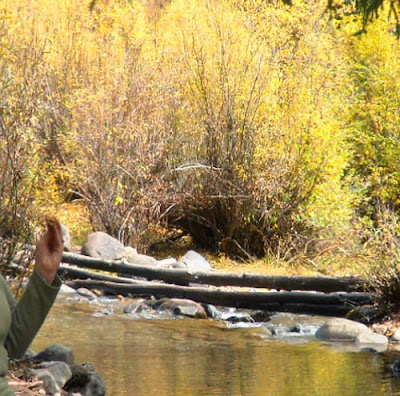 Someone recently sent me this photo by Juergen Teller. The white blur between the two trees immediately behind his right shoulder jumped out at me. I think it's a bobcat but it would be nice to get a second pair of eyes on this to confirm. What do you think? 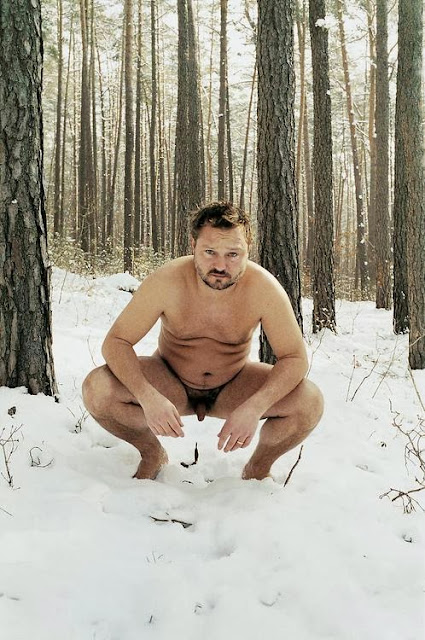 J--, are you there? I haven't heard back from you about the Teller photo. It would be great to get some feedback if you have a moment. Anyway, I've put all the photos on the blog today so we'll see if anyone can decipher what's in them.

This exchange of emails is beyond bizarre though thoroughly entertaining. :)