Cleaning out the basement this week I found this old paper written by my mom. 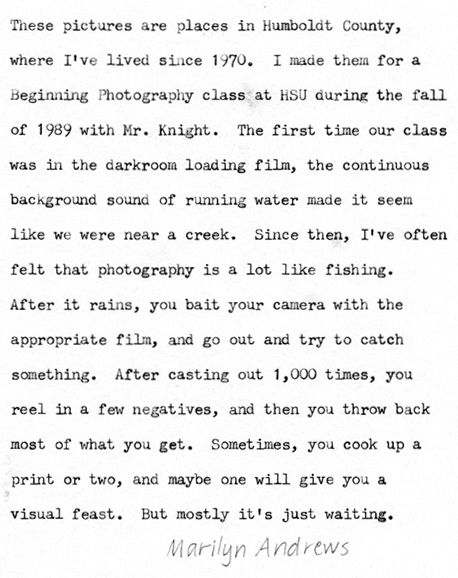 It's an artist statement she wrote long ago for an intro photo class. This was 1989. My younger sister had just left for college the year before. Empty nest. I think my mom felt freed up all of the sudden, so this was one of several art classes she explored around that time. Photography didn't really take. She wound up becoming a sculptor.

Looking back on this note now I'm struck by how similar it is to Stephen Shore's foreword to the original Uncommon Places. I'm not sure why this passage was removed from the second edition. To me it seems to activate the whole book:

"The trout streams where I flyfish are cold and clear and rich in the minerals that promote the growth of stream life. As I wade a stream I think wordlessly of where to cast the fly. Sometimes a difference of inches is the difference between catching a fish and not. When the fly I've cast is on the water my attention is riveted to it. I've found through experience that whenever —or so it seems— my attention wanders or I look away then surely a fish will rise to the fly and I will be too late setting the hook. I watch the fly calmly and attentively so that when the fish strikes —I strike. Then the line tightens, the playing of the fish begins, and time stands still. Fishing... is an art that calls forth intelligence, concentration, and delicacy."

I'm pretty sure my mom was not familiar with Stephen Shore when she wrote her statement. But the comparison to fishing seemed natural to her, just as it did to him.

Sometimes I wonder. Of all the fish in the river, the one that finally comes home with me is Photographer. It's a lovely fish in some ways, true. But also troublesome. If I were trying to stink up the whole joint I couldn't choose a better catch.

I can't remember either of my parents ever pressuring me to pursue any career. Or any interest at all really. There was never any talk of "You should think about Y," or "So and So is doing X." I think they knew that whatever was going to develop would come out eventually. And they were wise or lucky enough to suspect that pressure would have no effect. Or worse, an adverse one. I'm not sure the exact reasoning. I just know they were completely supportive and open to whatever path I followed. Even if it eventually led to shooting people.

Of course if I'd developed into some Tea-Party dickwad there might've been some second guessing. Even parental love has its limits.

Let your kid do anything. It was a great arrangement as a kid, but now that I'm a parent I find myself wondering if I can follow through. It's a philosophy that requires a certain leap of faith. I think if left to their own devices, all three of my sons would choose a career of sitting on the couch playing video games forever. And if I yelled at them that they were wasting their lives it would make them even more determined. So at this point I'm not sure how much pressure, if any, to apply, or in which direction, or toward what. But they're young still, with many reels to cast.

My mom has been sculpting some far out stuff lately. Mostly bronze. I don't really understand it. I think it's about some novels she read. If you can imagine a novel transformed into a giant phallic bronze thing with spools and candles and rope, it's sort of like that. I don't have any context to even begin grasping what it's about. But there's no question her sculpture is 100% hers, and that it's pretty far out.

I found this photo with my mom's note. I think she took it during her photo class but I'm not sure. It's definitely from that time period circa late 1980s. 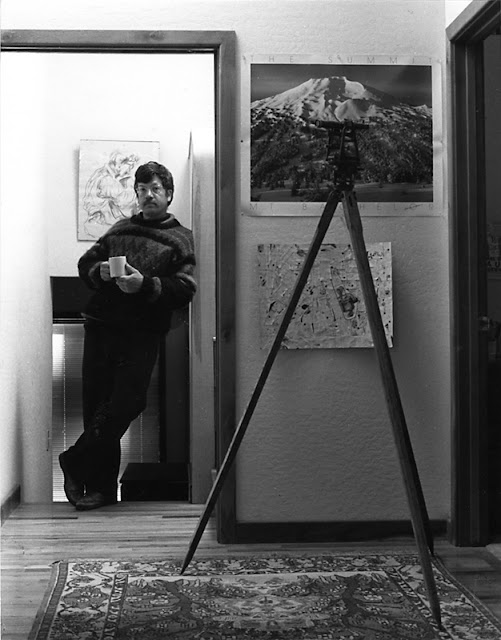 That's my dad posing near some of his stuff. His daily coffee. His survey transit. A drawing of him playing guitar. A poster of Mt. Bachelor where we learned to ski. Looking at the house he built on a wooded ridge about 50 miles from the nearest stoplight, where we were raised raw and unpressured. I think it was an ideal place to grow up, but I know many people growing up in other places also feel that way.

You'd think a country bumpkin like me would've learned to fish as a kid, but no. I've never understood the appeal. It's too stationary for me, too much like meditation, which I've also never been good at.

I suppose writing is similar, sitting in one place watching the thoughts float by. But with writing at least you have something to show for it in the end. You always catch something tangible even if you're not sure the species. But mostly it's just waiting.
Posted by Blake Andrews at 12:47 PM

at least with photography you can walk around. And unless you're Weegee there's less entrails too.

Based on response so far, I guess I should give up on personal reflection and go back to writing snarky potshots.

A lovely post, one of the best you've ever written. And your mom's artist statement is great. A pretty good photo, as well.

Your philosophy of child-raising sounds right to me, but it's not a subject I know anything about.

Excellent article as usual. Your blog is the only photography blog worth reading in my opinion.