Even living on the West Coast I can't escape the coverage of Hurricane Irene. It's dominated the news lately. This morning the New York Times ran what I thought was an interesting storm picture. 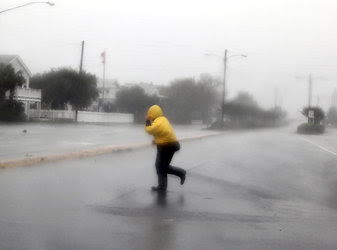 At first glance the photo doesn't show much, just a person running for cover. But it actually shows an awful lot. It shows that the weather where this photographer is standing is so bad he can't keep his lens dry. The streets are deserted. As his camera is battered about, Randall Hill squeezes off a blurry frame or two. Or at least that's what I imagine.

Most photos are made in good weather, for the simple reason that shooting in a storm is a hassle. Wet cameras, wind, cold, etc. For example I live in one of the wettest parts of the country but looking at my photos you'd think it never rained in Oregon. Bad weather faces photographic discrimination not just by me but generally. Even a camera as supposedly objective as Google Street View times its shooting for dry days, which is a bit like timing portraits for smiles. A convenient lie.

Martin Parr's Bad Weather is the classic counter example. Unfortunately this is one of those books which is hopelessly out of print and rare. I've never seen an actual copy (maybe a job for Eratta?), but images can be found here and there on the web.

Parr used an underwater camera with flash, and judging by the photos he needed it. Many of the photos are shot in winter, in dim light, during downpours. It must've been difficult for him to stake out scenes, much less analyze them with a photographic eye. Nevertheless he came up with some doozies. 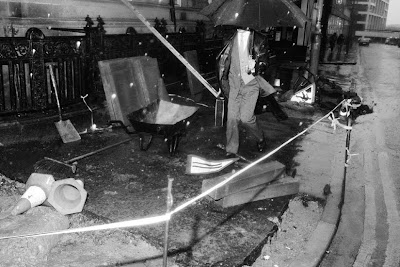 I'm not sure how he saw this one. Maybe the photo gods were with him. Who knows, but it works.

I think part of Parr's lesson is that photography isn't a straight mirror of reality. We always apply a filter. We aim the camera in certain directions and not others, and we shoot at certain times and not others. Which is fine. A filter is a form of vision. But it helps to be aware of that filter, to realize that the choice not to shoot during hurricanes is a conscious one, and maybe wonder what else is being filtered.
Posted by Blake Andrews at 7:58 AM

If you're reading the New York Times, of course you can't escape Irene news.

Does anyone have any experience with waterproof compacts? I guess one of the problems is that there is very little light if it rains heavily.