My recent post about the premature death of my Instax camera (it's actually alive and well) provoked a few interesting responses. The most spectacular anecdote was from Hernan Zenteno, whose camera death made mine look like small potatoes. Not only did Hernan destroy his camera and gear kit, the collateral damage included his car. 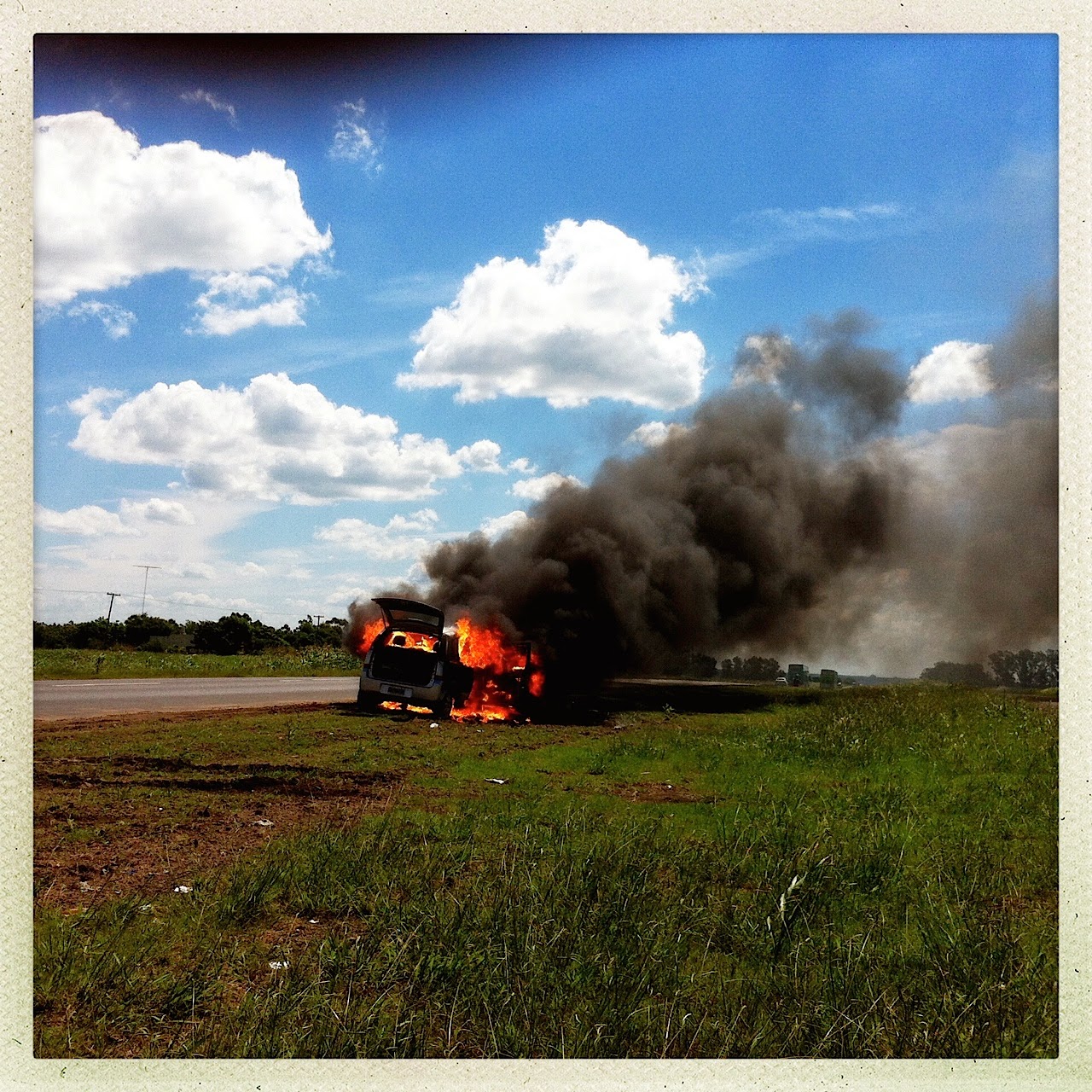 Somewhere in that fire was Hernan's Fuji X-Pro along with a few lenses and accessories. Sorry, camera. You do not get to die peacefully in your sleep. It's a fiery explosion for you! Wouldn't it feel nice to do that occasionally? There are times I'd love to dynamite my computer. Or my stupid iPod which never seems to work right. Or my car, which has been having, let's say, issues lately.

As you can see, the attached lens fared slightly better than the body. It almost looks like a photo-installation piece you'd find in one of those New Photography shows. 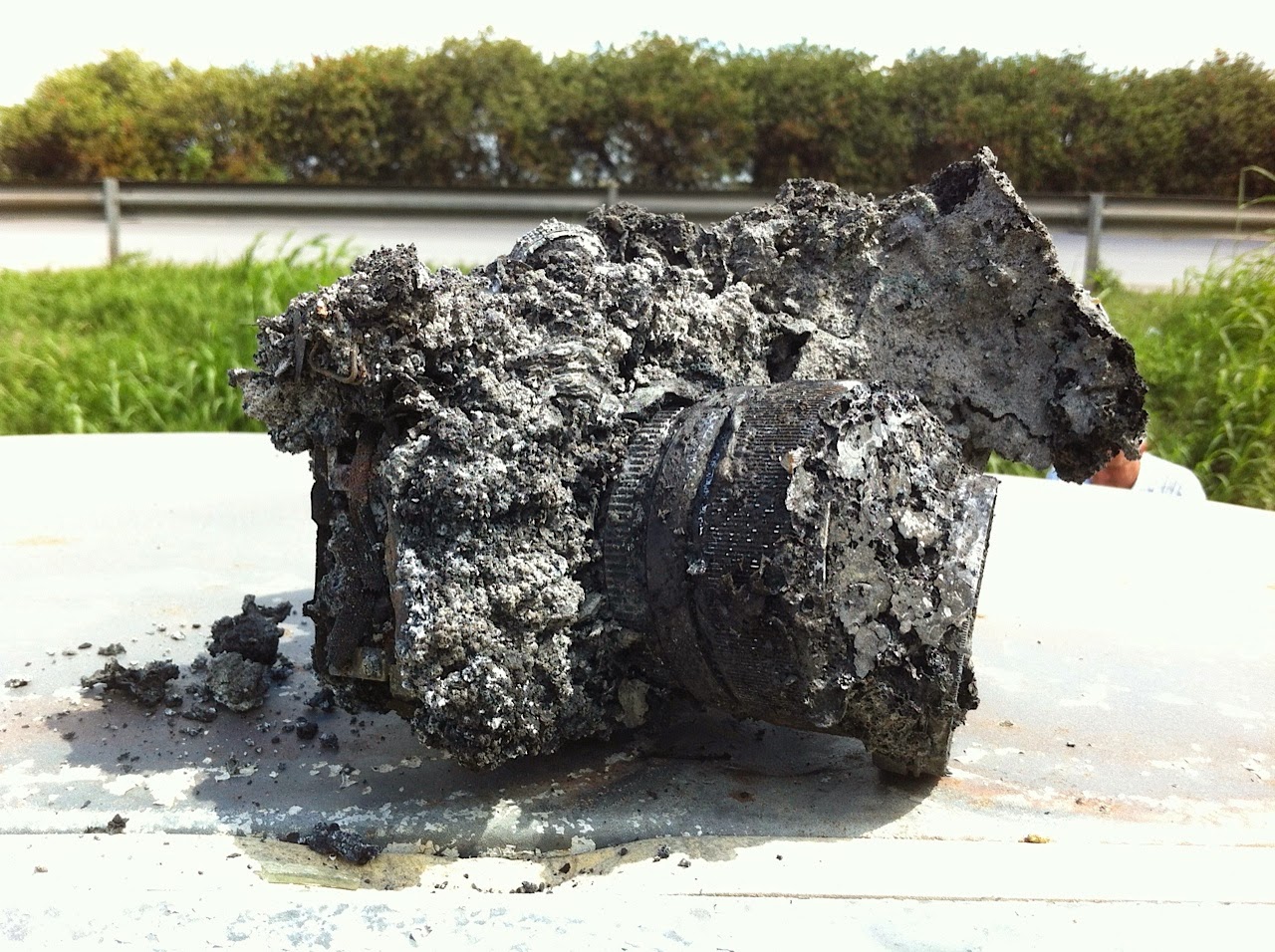 OK, Hernan. You win the dead-camera-story prize. I'm pulling out of the race.

But while we're on the topic, my 40 mm Summicron lens has died once again. This has been an ongoing issue ever since I bought it used in 2007. The lens dies. I get it fixed. It dies again. And so on. But this time I think it's really dead. The last time I brought it in, my camera guy George threatened to send it to Leica. Screw that.

Other than being broken the lens is perfect. It's small and quick. The image quality is outstanding. It deserves better. A fiery explosion would be more dignified. But alas, it's going out like a weary old body. Fixed, broken, fixed, broken, dead.

It's always the same problem. The outside barrel comes loose from the lens body and leans into the aperture ring. I don't mind a tilted lens. I actually think it looks cool. But it rubs against the aperture ring making it very sticky to turn. Right now I can only shoot above f/4. If I try to open wider, the entire barrel spins freely. Not really a problem with summer coming up. I'm usually at f/8 or less. But yeah, actually it's a problem. 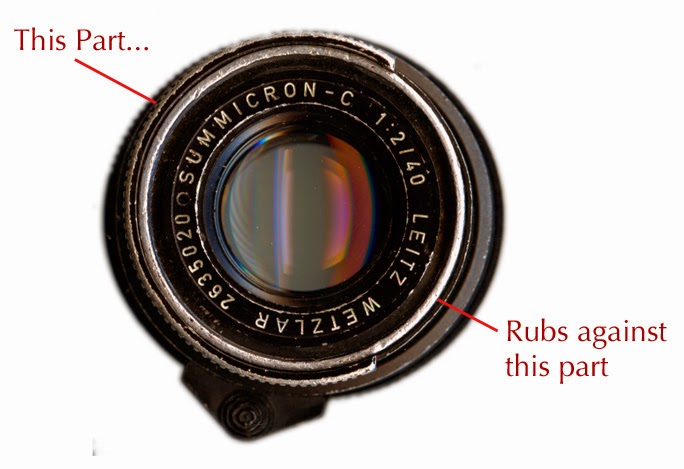 Having a broken lens defeats the point of a Summicron. They're supposed to be tanks, top of the line, indestructible. That's why the 35 mm version is so expensive. The 40 mm has the same elements and the same glass. It's solid and heavy. But the outer barrel is attached with glue, not screws, which is perhaps why the 40 mm Summicron is not so expensive. What was that I was saying about obsolete tools?

Oh well. I've gotten plenty of mileage from this lens. I've beaten it to shit, lost the filter, shredded the hood, broken the focus knob off, ground the writing off and the rim to bare metal, and put a few thousand rolls behind it in the process. I can't complain that it's finally given out. But it still sucks.

So I've been using the Hexar and scouring eBay over the past few weeks seeing what's out there. As you probably know the Leica second-hand market is silly. If it says Leica it's automatically worth three times normal value. That's the typical seller's mindset anyway. So I've been leaning away from the lenses which say Leica and toward the nearly identical lenses which say Minolta. But I haven't found the right one yet.

Some other things have turned up though. A nice rubber lens hood. A set of Leica lapel pins. A custom-made wooden lens cap for Leica Zeiss Olympus Pentax Nikon. A custom focus tab, which I would dismiss as useless if didn't know from experience that those things can break off.

But the weirdest thing so far is this box for $30 plus shipping. 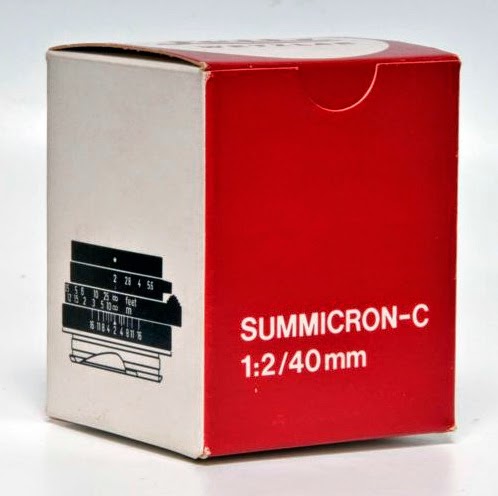 Note that it doesn't actually come with a lens. It contains just air. It's genuine air from, let's see...Vacaville, California, which I think has pretty good air. The listing doesn't mention the dimensions, but I'm guessing they're smallish. I'm not even sure if the box says Leica. But you could put a Leica lens in it. Or some other lens. Or you could store pretty pebbles in there, or perhaps some old cassettes. I bet it even comes shipped in its own box. Two boxes for the price of one!

Every time I shop for something I'm reminded why I hate shopping for something. I just want the new lens and to be done with it. Then I can move on. But first I might stage a big explosion to give the old one a proper send off. On a nice sunny day I can probably use the lens as a magnifying glass to start the fire. I think I could do that at f/4.
Posted by Blake Andrews at 3:33 PM

I understand the Fuji X Pro is prone to this sort of thing when left in burning cars.

Blake, I suppose that the more closed the diaphragm the better the possibility to concentrate the light and start a fire. Maybe f11 is better, f16 I think is a bad idea because the diffraction.
Tell me about need to buy a new lens. I think I am a winner here too. Because local politics dollar is more expensive, 11 pesos=1 dollar, by now. There are no official sellers for all the brands or models. So I tried to got an old Minolta but guess what, with all the 4/3 cameras on the street there were made adaptors. So all the lenses that were selling by peanuts some time ago disappeared and now they ask a lot of money.
Barry, you are right, this things in Fuji cameras happen only in RAW mode.

I have that lens. I do not own the box...YET

jeez, Blake, if you really like 40's, try VC Nokton. I haven't used it, but have preferred their 28's over any of the several red dots of that length I've had.

I haven't tried the 40 mm Nokton but I am leery of that lens because Ken Rockwell gave it a very lukewarm review. And I did try the Voigtlander 35 mm Nokton a few years ago and I wasn't very happy with the results. It is not sharp across the film plane and it shows some barrel distortion. So I will probably stick with what I know which is the Summicron. But I have been striking out on recent eBay bids. So we'll see what happens. OK, enough gear talk. Back to regular programming.