7. Drink Very Scant If Any 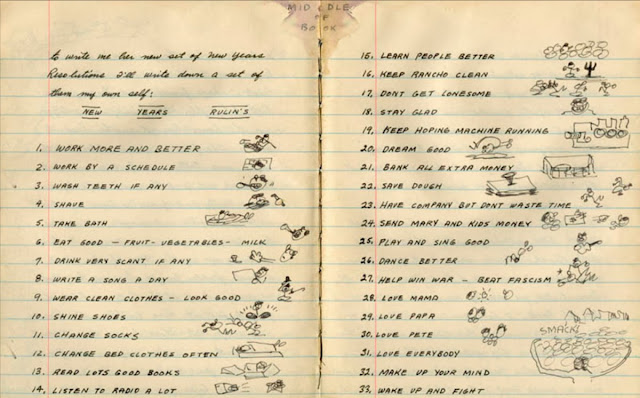 This list of New Year's Resolutions by Woody Guthrie (from Jan 1, 1943) has been making the rounds lately.  I don't know anything about this Guthrie character but he seems like a simpleton. I mean, 16. Learn People Better? That's not even good Englsh. But in his defense people were generally stupider back then before computers and smartphones and could look stuff up easy. They just had to rely on their wits and on whatever farmtools were handy. And I suppose that's why our forefathers started wars, plus they had to stand up for what they believed. Like when he wrote this was during a war I think.

What does any of this have to do with photography? I think it should be obvious. Computers and wars and getting smarter over time have a direct effect on photographs. I mean, duh! So let's be happy for modern times. For what it's worth my main resolution this year is to get smarter. I'm going to look stuff up like crazy. Like this list for starters is something I looked up. Check. ✓ And mate.
Posted by Blake Andrews at 8:21 AM

Dear Blake Andrews,
I wouldn't call anybody a simpleton.
That's ugly thinking.
Regarding Woody Guthrie,
it might be advisable to look at his song texts,
it could turn out, that Guthrie knew why he put his words as he put them.

I HATE A SONG

I hate a song that makes you think you are not any good. I hate a song that makes you think that you are just born to lose. Bound to lose. No good to nobody.No good for nothing. Because you are too old or too young or too fat or too slim. Too ugly or too this or too that. Songs that run you down or poke fun at you on account of your bad luck or hard traveling. I'm out to fight those songs to my very last breath of air and my last drop of blood. I am out to sing songs that will prove to you that this is your world and that if it has hit you pretty hard and knocked you for a dozen loops, no matter what color, what size you are, how you are built, I am out to sing the songs that make you take pride in yourself and in your work. And the songs that I sing are made up for the most part by all sorts of folks just about like you.

I could hire out to the other side, the big money side, and get several dollars every week just to quit singing my own songs and to sing the kind that knock you down farther and the ones that poke fun at you even more and the ones that make you think you've not got any sense at all. But I decided a long time ago that I'd starve to death before I'd sing any such songs as that. The radio waves and your movies and your jukeboxes and your songbooks are already loaded down and running over with such no good songs as that anyhow.

But in his defense people were generally stupider back then before computers and smartphones and could look stuff up easy.

Songs? Me, I'm still recovering from the tune of Lionel Richie's "Hello".

Lionel Richie's song has been reverberating in my head for days. It won't leave.

As for beloved Woody, what can I say? I could try to explain this post but there seems to be a huge disconnect here which probably can't be surmounted. And that's fine. I love disconnects. I foster them. So let's just say I pasted his guitar motto on my camera and leave it at that:

What I held for ignorance was irony.
Sorry for this misunderstanding. I never got along with the cool guys .
All the best.