Troy Holden: What Was He Thinking?

Troy Holden is a photographer based in San Francisco. More of his work can be seen here. 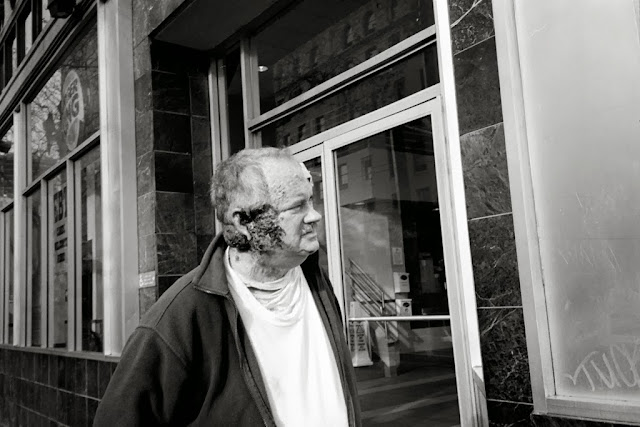 I take public transit to my day job and get off 2-3 stops past my actual stop in order to get some walking/shooting in before/after work. One morning I saw a man with a massive head wound and decided to grab a candid. He didn't notice me raising the camera to my eye as he was focused on walking into the Burger King on his left. I snapped this shot and moved on. 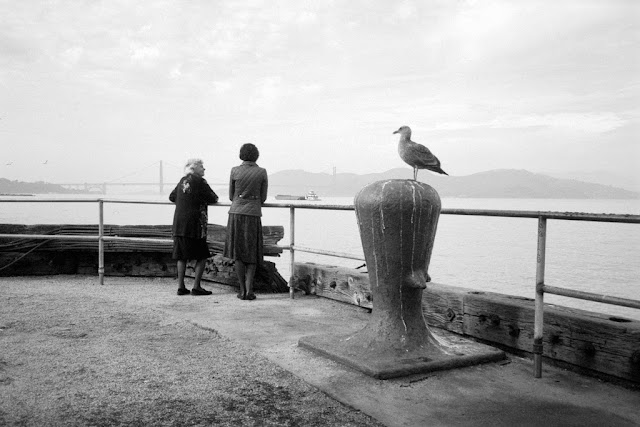 A few years ago, my employer held a convention in a warehouse along the northern waterfront. On the lunch break I was walking the circumference of the pier and came across this mother/daughter pair having a heart-to-heart. I tried a few different scenes of the duo without much luck. As the ship on the horizon drifted thorough the frame, the seagull landed.

I don't take many photos of the Golden Gate Bridge, but here the harmony was coming together while downplaying the bridge. I was able to make it the least interesting element in the frame, while still including it. 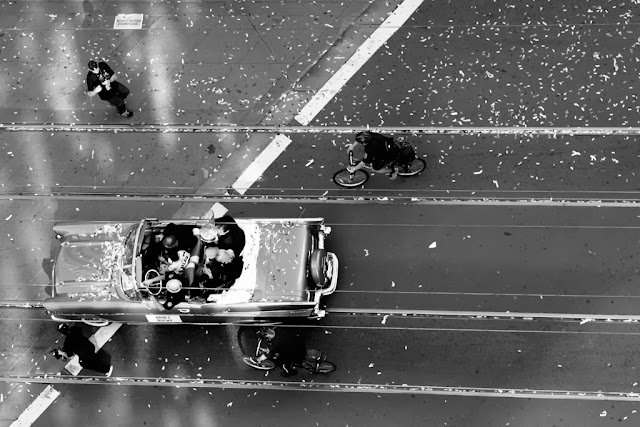 In 2010 the SF Giants won their first World Series. After decades of defeat the city was electric with energy. A friend of a friend worked in an office high above Montgomery Street at Market and invited me to take photos. I had a bird's eye view of the parade! The mid-day  light was harsh and the confetti everywhere was making it worse. But I was in a unique photo opportunity and had to make it work.

As the manager of the Giants drove by with the World Series trophy in the back seat, I leaned out of the window and pointed my telephoto straight down onto the street. A friend held my feet so I wouldn't fall to the street. I made one exposure as the car passed by. 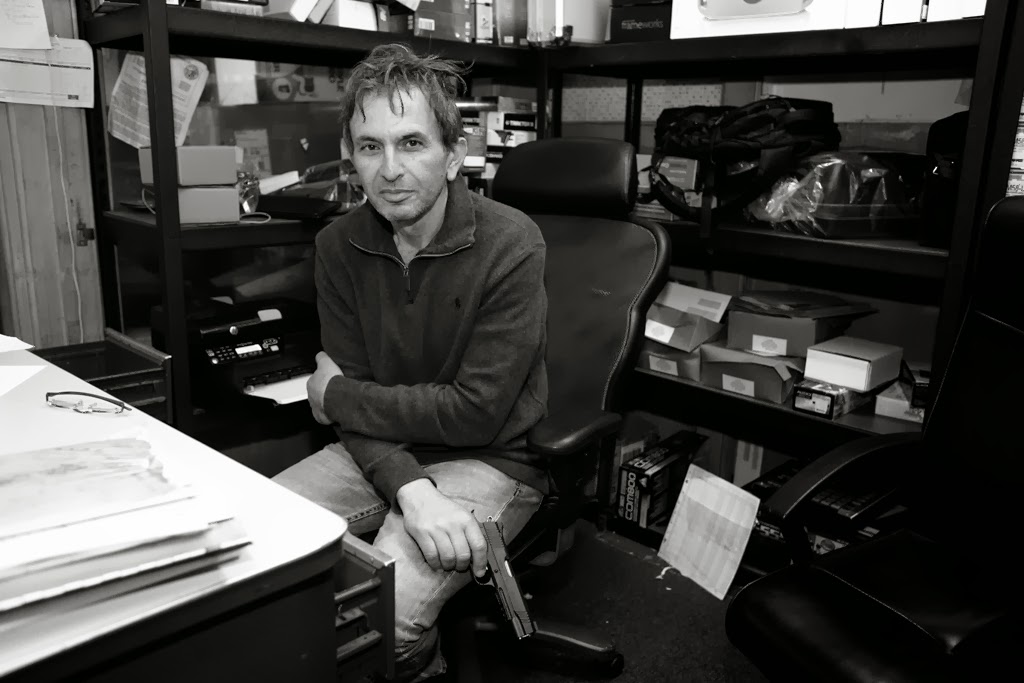 When I asked Marwin to make a portrait with me, he suggested his back office. As I began taking photos, he reached into a safe underneath the desk and pulled out a loaded pistol, setting it on the corner of the desk. "This will make the photo interesting!" he said. I didn't pay much attention to the gun itself, but felt it overwhelmed the composition by being on the corner of the white desk. I asked him to tuck it down a bit lower towards his knee and he obliged.

I made 2-3 portraits, showed him the LCD, smiled, and left. I later gave him a framed copy of this portrait which now hangs in the same back office as pictured above. 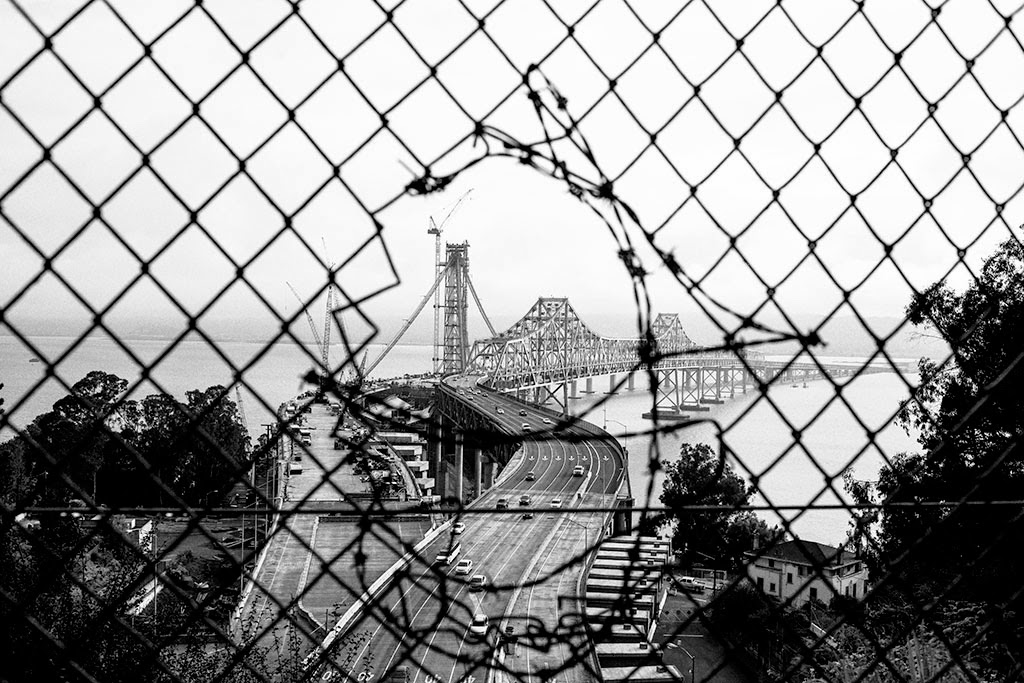 I had been trying to take a photo of the Bay Bridge's Eastern span transition for months. One morning the sky was overcast so I drove out to Treasure Island to look for a good point of view. As I was driving along, this scene exposed itself. I pulled over and took a few photos with my lens stuck through the fence but backed up for a few more shots using the fence to frame the bridge.

The bridgework has since been completed and this view no longer exists. 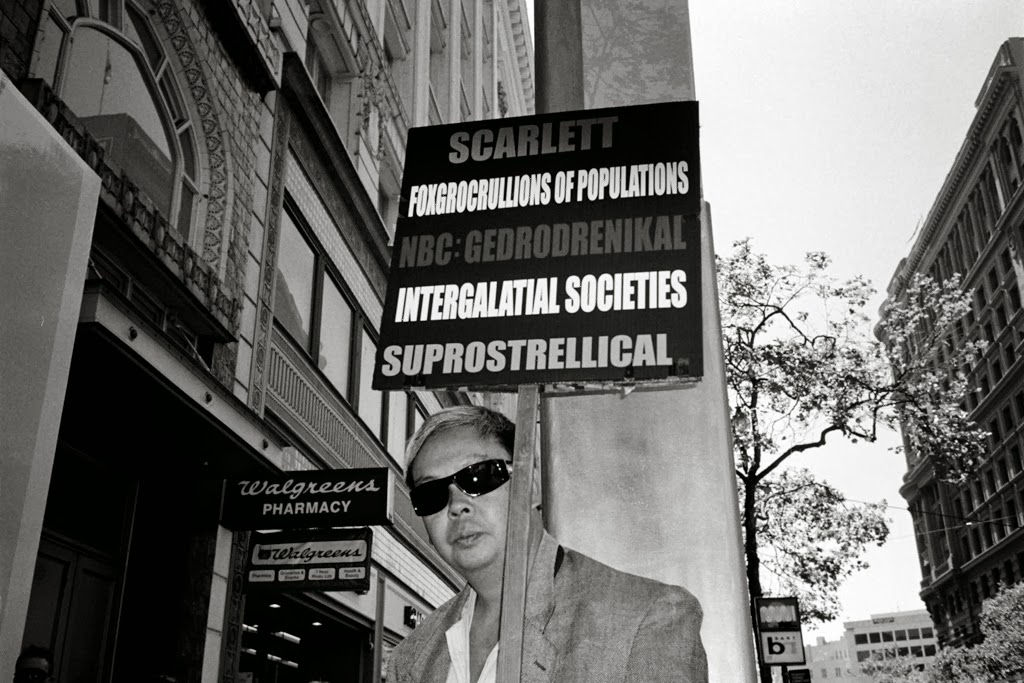 This is Frank Chu, a well known character on Market Street. I've been snapping portraits of Frank since I started photographing and he's always a willing muse. After shooting Frank 2-3 times a month for several years, it can be challenging to bring a fresh perspective to the frame.

This photo appears to be a hipshot. But here I asked him to stop walking, framed the portrait, and squatted down a few feet before releasing the shutter. I don't often use flash during the day, but since I knew Frank wouldn't become startled, I let my camera flash pop a little fill on his face and infamous sign. 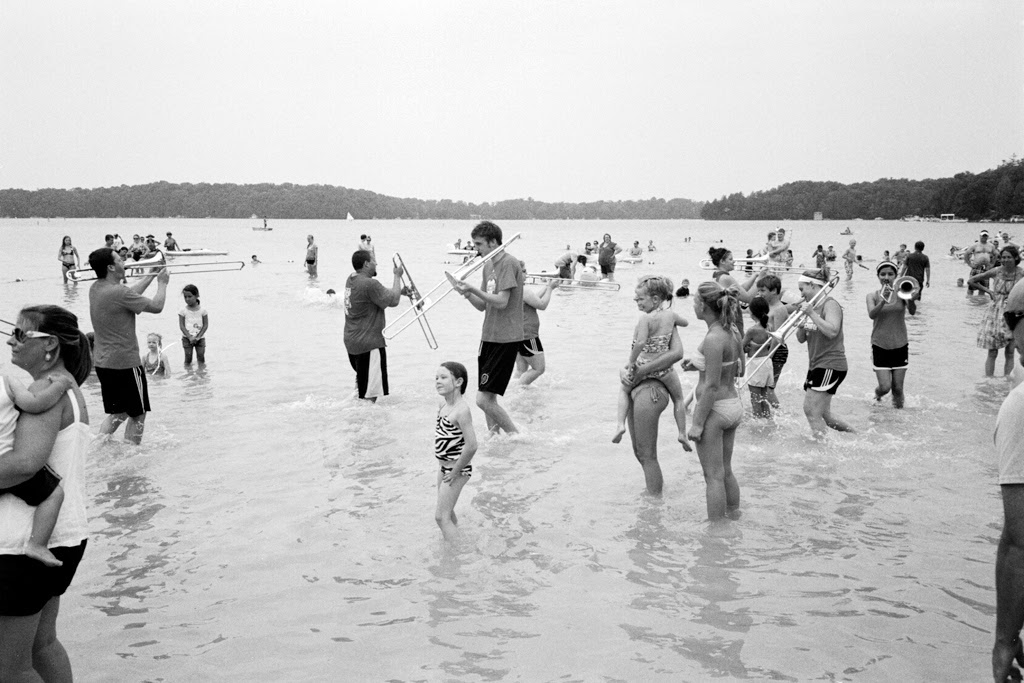 I have family in Wisconsin and end up visiting once or twice a year.  Photo ops are few and far between for me when I'm visiting, so this scene was a nice surprise during an otherwise boring afternoon.

In this shot, I'm at a small town parade celebrating the 4th of July with my family. At the end of the parade route was a beach with a picnic area. We grabbed a few hotdogs and cups of beer in the picnic area when the University of Wisconsin marching band showed up.

I didn't pay much attention to photographing the band members until a few of them marched into the lake while continuing to play their instruments. The people in the water looked in amusement while the band played on. I walked into the water a few feet to remove the beach from the foreground and made 5 or 6 frames. I like this one the best because it has the least context outside of seeing a marching band performing knee-deep in a lake. 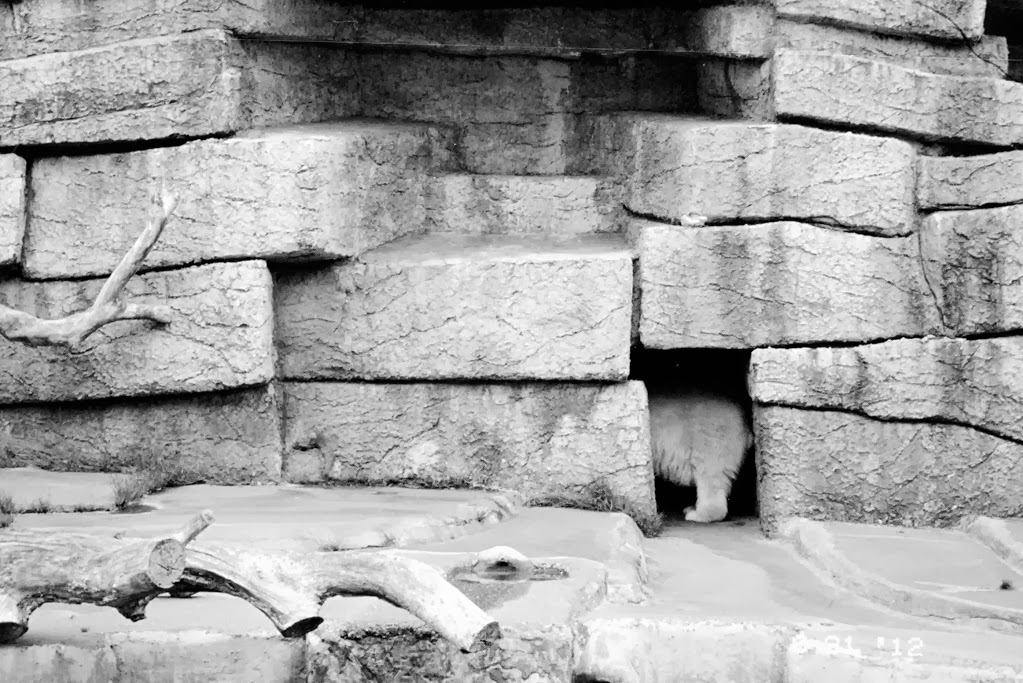 The San Francisco Zoo is a gloomy place. It's a few blocks from the Pacific Ocean in one of the coldest and foggiest corners of San Francisco. I'd never photographed the zoo until I became a father. My daughter is two now and loves the zoo, so I follow along and look for photos that illustrate the unhappiness of the animals.

Many of the larger animals are housed in "grottos" -- here we have the polar bear grotto. I used a telephoto lens to condense the back wall as a frame around the 1/2 bear in the bottom of the photo. I forgot to disable the timestamp on the camera, so you can see that in the bottom right. 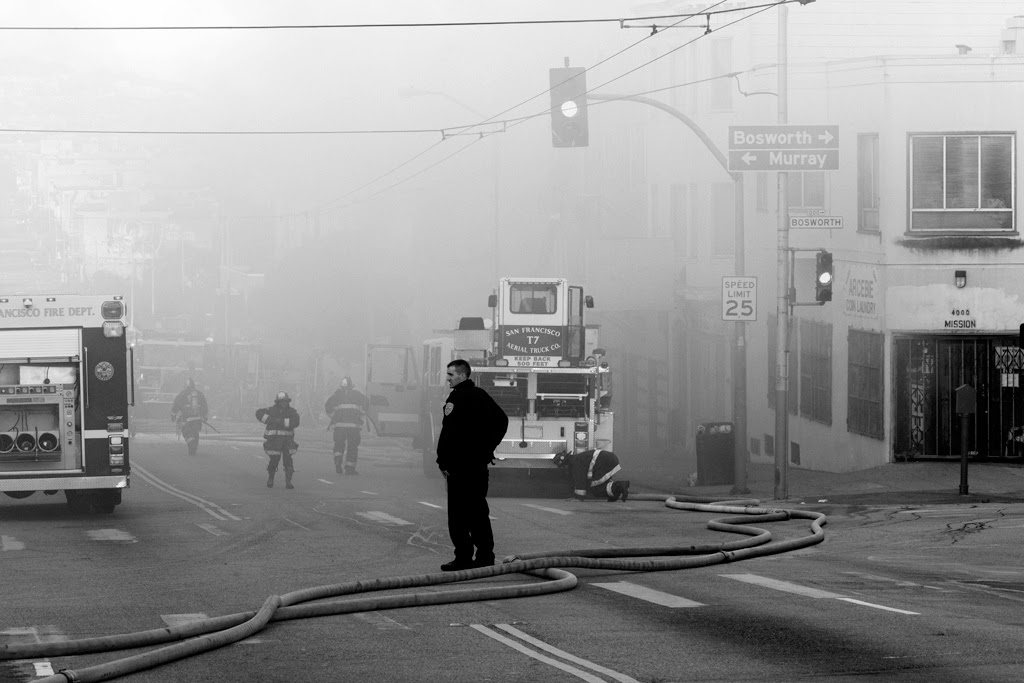 One winter morning I woke up to the smell of something burning. When I looked outside, I saw a tall plume of smoke arising from a few blocks south. I grabbed my camera and headed towards the smoke. As I made my way towards the source of the fire, some firefighters were setting up on the perimeter. The light was subdued from the smoke, which gave some dimension to the frame. I took a few more shots and walked home. 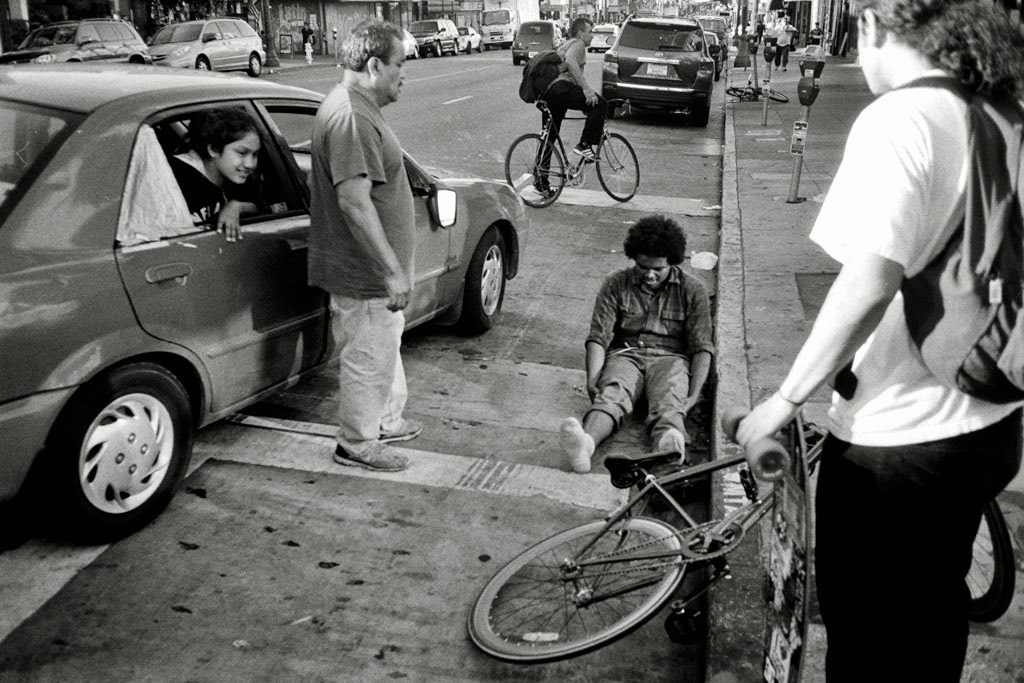 During the summer months I often walk home from work. Part of that route is through 8 blocks of Mission Street. The traffic in the street is a dense mix of bikes, cars, and buses. Once or twice a month I come across a bike/car/bus accident like the one pictured here. Everything happens so quickly when a cyclist gets hit by a automobile.

In this shot I knew the cyclist was alright and grabbed a few snaps before moving on. There are 3 or 4 frames before this one where he's laying down right after getting hit by the car. No helmet, but ok. He got up after this shot, much to the relief of the bystanders (including myself).