No, this is not a cup

OK, you know the drill by now. My review of Deutschland in its original language (an extreme West Coast snark variant of English) is here.  The Google Translate version is below (English > Swedish > German > Chinese > Welsh > English). Way by I love book this anus the. 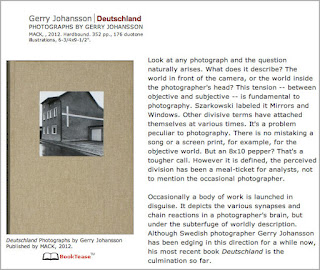 See the pictures, naturally leads to problems. How do they describe it? The world in front of the camera, the photographer's world inside the head? The tension of this - objective and subjective in the middle - photography. Szarkowski noted mirrors and windows. The other terms of these differences will be set at a different time. This is a problem that is specific libraries. This is not to doubt the song or the screen, such as the objective world. However, 8 × 10 businesses Pepper? This is a tough one. But the definition of sub-section will be invoked, analysts meal ticket, not accidental photographer.

Sometimes, under the form of the body starts working. It shows the chain reaction of a photographer in different synapses and brain, trying to escape from the common description. Photographer Sweden, in this direction, and now face much Gerry Johnson, his latest book, Germany (Mark, 2012) Sunday top

Germany by the German industry after simple square image, every page, every place, and then alphabetically by placing a mark book mark thick. Any events. Helvetica font. Beige fabric, and convey quiet efficiency. The original page feels a little like listening to Kraftwerk modern European airport waiting for. What else to be more accurate? More objective? What could be more German?

In fact, more than similar German products aesthetics cup, at least at first glance. The clean white walls and lack of people, if not sterile landscape, there are a number of towers and conical roof, the framework of the background. Almost every element in the focus and stable. Streets and roads are always in the spread of the camera angle, the vertical offset form nonconverging by the floods. One by one, the systematic image from March to impose restrictions on the way. It can be be fooled into thinking that this is one of the objectives of the German section, it is not clear whether we let art or encyclopedia.

This camouflage. To better demonstrate, Germany has become a very personal work.

Johansen central vision. He is the only one that can make these pictures, because they are basically it. Gerry Johnson as a watchmaker. The visual world is playing. This is completely different from the scattered pieces, this is it, piece by piece, carefully place the rigorous approach. The house is just. Some of the fence. Very poles in the right position. Weaving is generally compressed black, white, do you have a picture, closely followed by the cat anus. Storage and mixed type pile, appeared to be inevitable, but only in the fact that, according to Johansson

No, this is not a cup. Which is Friedlander area. This will change the landscape of John Pfahl, but it does not change. Move the camera a few inches in any direction and photos flop. This is subjective.

Johansson has adopted a similar style, different places in his earlier books. United States, Sweden, the Netherlands and the Pontiac seems to have a common vision. In fact, the majority of this fact enables photographers, contemporary photography is natural instinct highlighted native. Conversely, Johnsson them in one obvious approach is, Germany. Random open its books, it is difficult to say, we are at the beginning. This place looks, makes it clear, but the court is weaker. Finally, our unique vision Johansson