Continuing its recent run of strong shows by emerging photographers, the Blue Sky exhibit this month is by Robert Frank. Before this show I'd never heard of him. Apparently he is Swiss-born but has been living in a remote part of Canada for the last several years. At the age of 87 he is older than most emerging photographers. But even though he is a relative unknown, Mr. Frank's photography belies his inexperience and shows great promise. 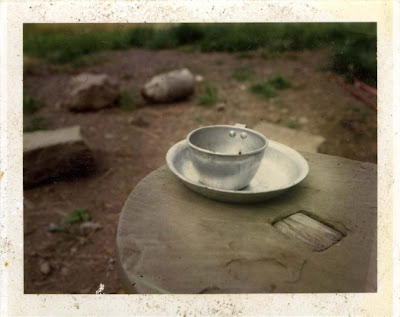 Untitled by Robert Frank, currently showing at Blue Sky Gallery
The current exhibit is comprised of 48 Polaroid images shot by Mr. Frank at various times over the past few decades. They show all manner of common sights from household utensils to snapshots of friends. In today's concept-centric photo world, these might seem unremarkable. Yet Frank displays a rare ability to elevate these simple scenes into sharp prophetic visions. Time and again Mr. Frank is able to transform the most mundane subjects into beautiful images. He is a true talent, and after viewing his Polaroids I'm curious to see how he might approach more socially involved material, e.g. black and white documentary or perhaps some type of visual travelogue.

We'll have to wait and see on that. In the meantime I congratule Mr. Frank on a very auspicious debut. I suspect this won't be the last we hear from him.
Posted by Blake Andrews at 8:02 AM

The most remarkable aspect of the show, then, would be the asking price for those photos.

Photos in the show cost roughly the same price as a first edition of The Americans. Given the choice I'd probably take the book.

The inexhaustible row of new publications by Egglestons, Shores and Sternfelds, to name but a few, is equally provoking and visionary.
It's encouraging to see that the publishing world is taking risks in promoting such promising talents.

I like Painkiller. Reminds me of another fave, Sick of Goodbyes.

I think this guy's photos would work far better in black and white. Hope he knows how to use his photoshop pluggins.
Hey, wasn't there some other old foreign geezer who used to shoot Americans?