In one of the very first Simpsons episodes Homer gives Marge a bowling ball for her birthday. She's never bowled in her life. Homer's plan is that she won't want the ball and he'll inherit it. And in fact the ball already has his name engraved.

But the plan backfires. Marge is pissed. Determined to learn bowling to spite Homer, she takes lessons, falls for a French bowling instructor named Jacques, and almost breaks up their marriage before finally reuniting with Homer in a parody of the final scene from An Officer and a Gentleman.

This past Christmas I tried to pull the same stunt. I bought the kids a camera thinking they would quickly get bored with it and then I'd have it for myself.

The camera was a Fuji Instax 210, a modern update of the old Polaroid Instamatics. I'd seen one recently at a friend's house and it was love at first sight. The image quality is fantastic. Tack sharp snapshots, unlike the Polaroid 600 I got for the kids a few years back.

But I couldn't really justify buying myself yet another camera, especially another "toy" camera. However Christmas was coming up. It might look good under the tree. It might look really good with my name engraved.

OK, I didn't actually engrave my name. But I did buy one for the family as a holiday gift. I put it under the tree Christmas morning. Then I sat back and waited for them to get sick of it. And it all would've worked out if it hadn't been for those meddling kids. The problem was they fell in love with it. 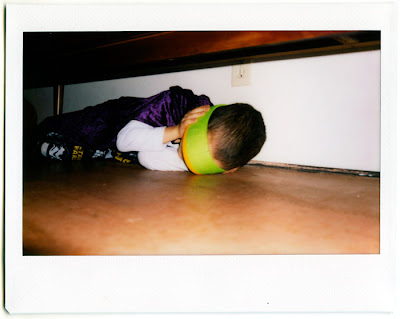 Most of their shots were of plain household objects. For a kid there's a simple pleasure in walking around with a camera and pushing the button just to see how a thing looks captured that's just fucking awesome. I love to see that spark. I wish everyone had it. 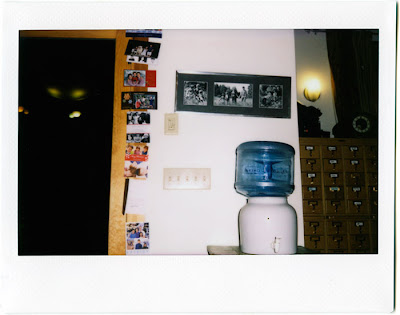 I suppose you can do the same push-button experiments with a digital camera but the Fuji Instax 210 spits out a real object. Then you get a few minutes of waiting as the images slowly develops. "Better than a deed, better than a memory," to quote Jacques. "The moment... of anticipation!" People always talk about their first time in the darkroom watching their photographs magically emerge in the developer. To me an instant photo is even better. You can handle the thing as it develops with no drips, no stinky chemicals. It's magic every time.

I followed one morning. "What are you shooting today?" I asked. 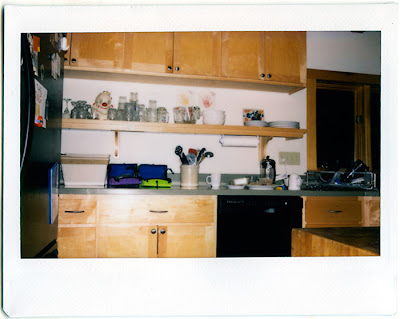 "I'm taking photos of random things because that's what you take pictures of," said Emmett.

"Ok, well what qualifies as random?"

"Like a piece of paper or a fork or something."

"What makes that random compared to something else?" 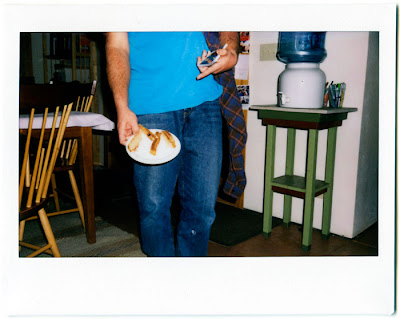 Ah yes, more film. Unfortunately the camera is based on the same economic model as inkjet printers. The body is only $80 but every shot costs $1. This makes it hard to sit there and watch your kid burn through a 10-pack in five minutes. I mean, that could've paid for 20 seconds of college. The camera came with 100 sheets. After we went through 50 the first morning I began rationing. "What's that you want? More film? I'll have to check and see if we have any."

Meanwhile I was sneaking the camera into my backpack to try it for myself. If they wouldn't get sick of it I'd have to take matters into my own hands. I drove out to Grid E7 in Springfield to try it on some display windows. 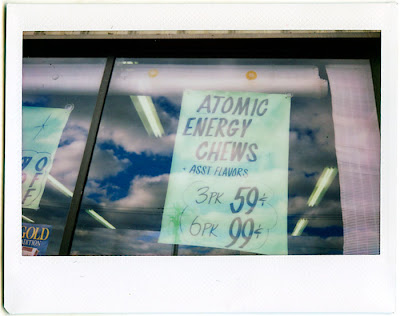 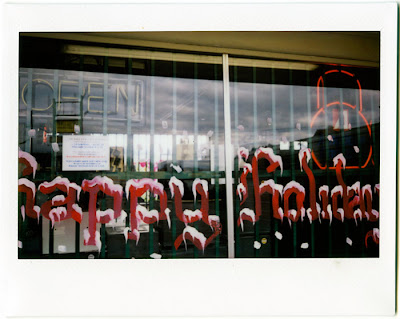 Not bad. Love the tonality. Later that night we went with friends to the BYOB vintage arcade downtown. On the way I took a few shots from behind the wheel. 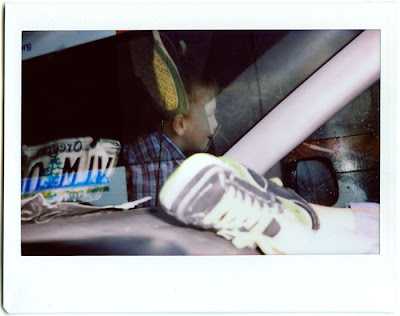 The license plate on the dash was torn off in one of our recent fender-benders, can't remember which incident exactly. But anyway I just love the image it reflects in the windshield. I couldn't stop looking at that on the drive, trying to combine it with outside elements. The Instax 210 makes a great car camera.

We stopped at Ninkasi for a few pints. I shot their patio fire. 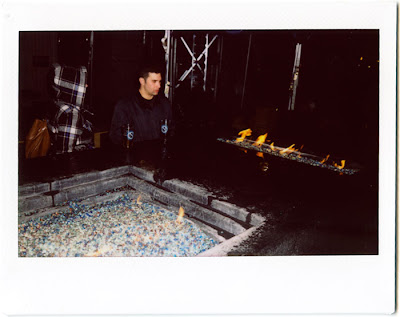 Then we took a few beers around the corner to the arcade and I shot there. I felt a like a kid shooting a fish in a bowl. 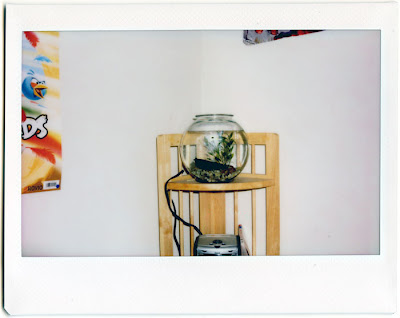 Here's a look inside the fishbowl. 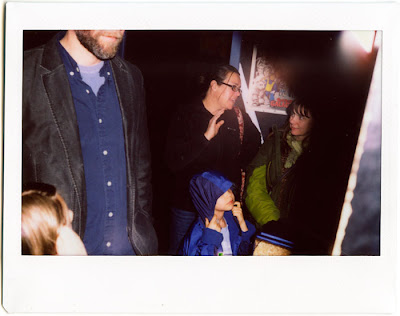 Below is my alltime favorite arcade game. I scored over 300,000 once during my serious playing days back in fifth grade. 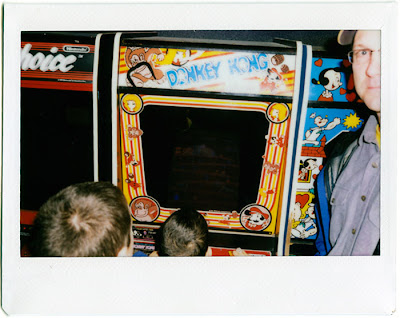 That's my son Emmett, 6, at the Donkey Kong controls, with Zane, 11, right behind. The guy on the right is Geoff who I've known since I was 8. I don't mean to sound like an old fogie but arcade games now really suck in comparison. They're all the same guns and bullshit. No charm.

This shot took me a while to decipher. 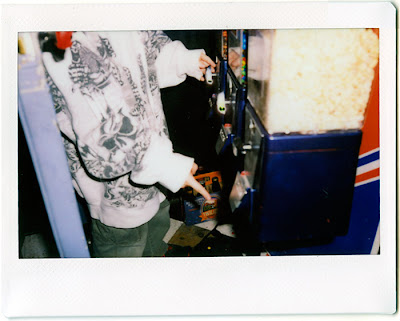 Most of the photo is normal but in the center of the photo where the flash reflects off some metal surfaces the picture is dark. I've circled the areas here in red. Those dots aren't painted. They should be brilliant white but they're not. Weird. 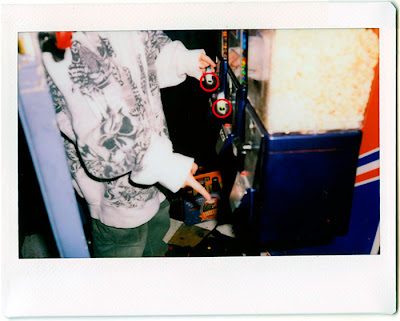 If you look closely at the fishbowl photo above it shows the same effect. The center of the hottest white area is dark black.

What's going on is the Clayden Effect. As far as I can understand it's a bit like solarization. When exposures jump far outside the normal range all hell breaks loose. The emulsion can become partially desensitized and the image is sometimes reversed. Ansel Adams played with the effect in this famous image. 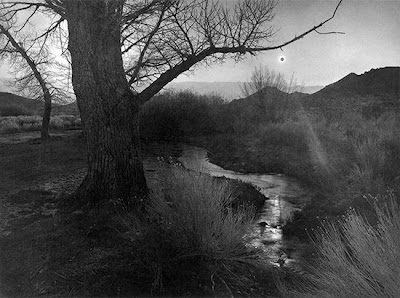 He describes the process of making it in this book. Apparently the effect requires a thick emulsion film, the type that was more common in Adams' era but is rare nowadays. This may be why the technique is relatively unexplored (Google Clayden Effect for scant results). Even Adams didn't pursue it very far. The only other recent project I know of is Harlan Erskine's Black Sun series (good description here). Maybe there are others?

Reading up on Clayden I realized that the Instax film I was using had a very thick emulsion. So by chance I'd stumbled on something. Aiming the camera directly at a mirror I tried to capture the effect as clearly as possible. 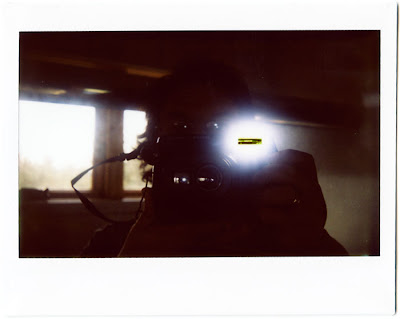 Bingo. The effect worked, and I could repeat it when I wanted. Great. On the other hand, meh. The photo is sort of interesting as a scientific experiment but it doesn't do much visually. But it's set the table. Maybe I can shoot the sun or something. Or look for shiny surfaces.

Unfortunately those experiments will have to wait since I'm currently out of film. The kids have gone through it all. I have film on order and when it comes in I'm going to set aside a secret stash for myself. Then I think I'll play around with the Clayden Effect, if I can sneak the camera away from those meddling kids.
Posted by Blake Andrews at 8:12 AM

We have one of these cameras at home and have shot the flash into the mirror and have wondered about this Clayden effect - now we know.

Your kids learned about photography as digital/unlimited - when they later learn each shot has a price, or at least "running out" - was it difficult to teach a sense of restraint? This is somewhat tied to Donkey Kong, if you have an unlimited game system at home vs. quarters in the machine.

My parents were quite thrifty and in the film era they may have let me take a few shots, but I wasn't introduced to the creative aspect of photography until much later, because the idea of "wasting" money/film to get an interesting shot was far outside how they would have operated.

"It's not exactly breakfast, not exactly lunch, but if comes with a slice of cantaloupe at the end."

I bought one for my niece 2 Christmas..s? ago and managed to re-appropriate it for a trip to Guatemala this fall. I was working in a free clinic and wanted to give photos to the patients (stole the idea from an NPR Pictureshow article). Anyway, after the trip, I started taking photos around Chicago with it and I couldn't part with it... so I ended up buying her a new one (the mini instax) this Christmas.

Got one myself for xmas from the girlfriend. I'd never have bought it myself but am having a lot of fun with it. Like your kids. It took a super crisp shot of my neighborhood - I was kind of in awe of how good it was. Now I need a scanner. And more film.

I tried the same trick with BuckyBalls. Thought my son would grow tired of them by the time of Christmas Lunch and I I could have them as my own after that. He, however quite enjoys them and I haven't seen them since....

Thanks for the link to Schink, Kariokos. Jörg also mentioned him to me, and wrote about his project here:

Hmm, I hadn't heard of the Clayden effect before I read this post, but this summer I took some photos at a car show in the middle of the afternoon on a bright sunny day. The ones I took on Fuji peel apart film with a Polaroid Land camera exhibited the effect in several places where the sun shone on the chrome. Shots from the same location on Tmax 100 did not show the effect at all.

Well, you've solved half of an old mystery for me. I have a work print from way back in the seventies that has two black suns. I could never figure out why they were black (I still don't know why there are two, oh well, it was the seventies). I'm emailing a copy of it to you to ponder.

Thanks for the shout out. More artist that you haven't mntioned are here:

Chris McCaw's are even more extreem since he is actually burning the paper neg with the brightness of the sun.