It's been a strange and somewhat shitty week. Last Friday I flew to Tulsa for the funeral of my four-year old cousin. I'd barely gotten unpacked when I was told that I probably shouldn't bring my camera to the service the next day. My family knew me pretty well. Sometimes I can be obnoxious with a camera.

Saturday morning we drove in a caravan to the church and I was careful to leave my camera in the car. It turned out the service was heavy on photography anyway. A large screen overhead showed a slideshow of Colby's life, followed by video clips. It was heartbreaking.

As I sat in a pew fighting tears, my inner photographer wouldn't go away. I couldn't help seeing potential shots nearby. The poster near the pastor. The row upon row of police in uniform. Raw emotions everywhere. I imagined Larry Clark in my shoes. What would he shoot? How had he kept it together during those funeral scenes? Then I caught myself. Is this how I react during crisis? Have I gone totally overboard? I was glad not to have the camera. 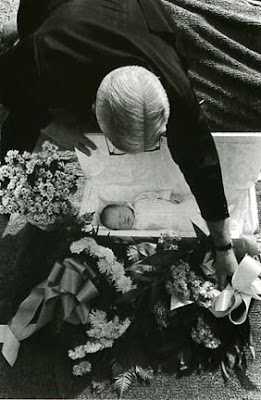 from Tulsa, 1971, Larry Clark
Afterward we all retreated to a nearby home to share memories and company. We set up chairs in the driveway where Colby's accident had occurred. At first I thought the location was a bit strange considering the home had a large backyard. Wouldn't we be more comfortable there instead? But thinking about it later I realized the location was very meaningful. By meeting in the driveway we were reclaiming the space. Not to erase what happened there but to renew it with a happier memory.

I asked around if anyone had heard of Tulsa but no one had. Before last weekend that book had provided my main mental image of the place but the Tulsa I saw was pretty different. There were no junkies or gunplay or rundown homes. The only similar feeling was the sense of death, and everyone circling helplessly around it.

I had my camera with me now in the driveway but more as a security blanket than anything. I didn't feel like shooting. It just felt good to hold.

That feeling lasted a few days. Sunday morning I found myself in the Tulsa airport terminal where I saw the perfect scene. A pilot's hat upturned on a countertop formed a very strange shape, and behind it a bald man in uniform sorted through blank printer paper. It took me a moment staring before I could decipher it visually. What's going on here? What is that thing on the counter? I'd never seen anything like it.

It would've made a beautiful photo but I didn't even raise my camera. I just held it tightly and kept walking.
Posted by Blake Andrews at 8:41 AM

My sincere condolences. Thanks for posting this.

Condolences (I could *see* that hat).

come to the presentation house gallery. you can see the tulsa exhibition in vancouver!
say hi if you do!

So sorry, how awful.

I'm a photographer from Republic of Moldova. It was very hard to keep my tears while reading your post. On the 25th died my uncle. I had my camera with me, but it was unbelievably hard to take any images. I saw moments eveywhere, but I kept them to myself as a way of respecting his memory and not be selfish. And I hadn't take any image since then.I couldn't.

My condolences for you and your family Blake. Great post, so to speak.