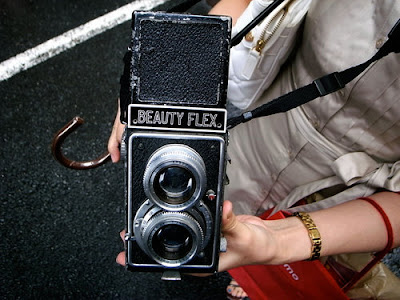 Beauty Flex shot by John Sypal for Tokyo Camera Style
I recently discovered John Sypal's Tokyo Camera Style courtesy of We Can't Paint. I'm not usually an equipment freak but there's something soothing about looking at all these old film cameras and knowing that they're still on the streets getting use, and the short descriptions of the camera users are just as fascinating. How does he find all these people?

Here in Oregon on the opposite side of the planet it's a different scenario. When I'm out shooting I will often see others with cameras, especially during events or photo-friendly situations. But I doubt I've run into more than a handful of people using film cameras and all of them have been in Portland. In three years living in Eugene, I have never seen another person shooting film. I suspect there are a few out there but if so they keep well hidden. Oh well, I guess I'll just have to shoot enough film to compensate for the rest of the city.

Strange how film thrives in the heart of one of the world's most modern cities, yet in Oregon which typically embraces the retro and the rootsy, digital rules.
Posted by Blake Andrews at 8:16 AM

As one of the Portland few I only hope enough demand continues to assure film exists in the future. Note however your thoughts are read on a blog rather than a written letter or in print.... time marches on.