Gus Powell: What Was He Thinking?

Gus Powell is a photographer based in New York City. The photographs below are from his series Lunch Pictures, many of which were published in his 2003 book The Company of Strangers. 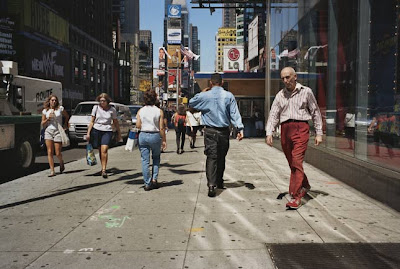 A Whistler Follows His Tune
"There is always some initial thing that gets me excited about making a picture at a specific spot. Long ago I wanted to do a project called 'Chewing Gum Constellations.' The plan was to shoot the surface of the street and look for Cassiopeia, Orion, etc in the patterns of abandoned chewing gum. This particular piece of pavement has always reminded me of that idea. The way the sidewalk slopes up towards the horizon – a bit like the opening credits for Star Wars – has always pleased me. Then I also get seduced by the reflected light that all of the glass buildings bounce through the city streets – the way it creates that sort of ripple or current on the sidewalk. So it’s all these sorts of things that I am thinking about when I start to invest some time looking at a specific location. What follows is seeing how I want that space to be inhabited and used by people. I love this guy in red pants. I love the way he’s cutting a trail that is slightly off the grid and the way the other figures in the space line up in descending order in the frame. In my mind mr. red pants is like the street photographer. He’s feeling out his own way in public space." 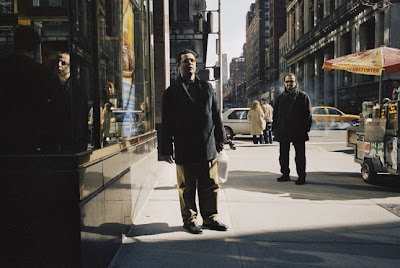 "One of my favorite images by William Klein is titled Four Heads. It’s the vertical that has a Cop, and lady in a hat, and two others all filling up the frame – each one going in their own direction but all locked together. I actually think it is probably cropped out of a larger frame. My picture has almost nothing in common with Mr. Klein’s image – but it’s got four heads in it – and was probably made within a mile from where his was. First I took pleasure in the light on that corner, then I took pleasure in how the two heads that are inside the café are faux reflections of the faces of the two men on the sidewalk." 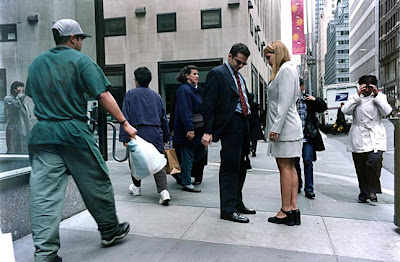 "I am walking East toward Fifth Avenue on a side street in Rockefeller Center. Twenty paces or so ahead of me I see this couple in some sort of a paso doble inspired stand off in the center of the sidewalk. I know I want to make some kind of picture of them but I know that they are not going to go anywhere. I have a little bit of time to add things onto their story in the center of the frame. I pick up my pace a little bit so that I am just a few steps behind the delivery man in green (it’s a bit like driving a car and getting into the ideal lane). I can see through the glass corner at the left that others are coming to round the corner. While walking towards them I keep trying to organize more into the frame and make this single picture." 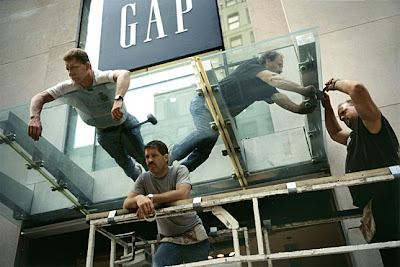 "The first time I went to the Sistine Chapel I thought it was amazing but also ridiculous. The spectacle of these giant wingless muscle men floating high up in the sky was preposterous. . . but then perhaps it isn’t. These wingless putti floating above Fifth Avenue getting a little work done at their own pace, enjoying the view. They are like the stagehands at the end of the opera sequence of Citizen Kane. Perched high above the pedestrian theater they call it like they see it." 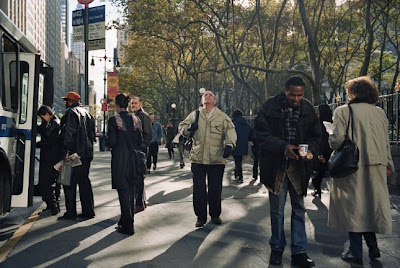 "I was, and am, very inspired by Philip-Lorca diCorcia’s streetwork. I like the light that he brings to his pictures and the way he uses it to amplify an open-ended moment that would normally not grab one's attention. I make a lot of pictures that use the natural reflected light that bounces around the glass city. This was a spot that I returned to at different times to work. I love the idea that these twelve or so people have really nothing to do with one another but they are now forever stuck in this awkward moment together. I think of the man at the center as a juggler in control of those distant light fixtures above him, as if they were balls in the air." 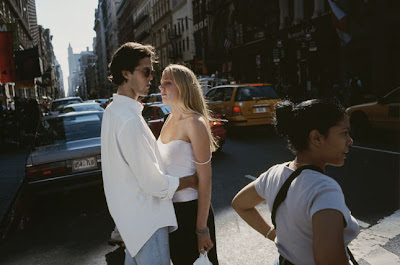 "I am mostly interested in making narrative images of insignificant non narrative moments (The Juggler might be an example of that) but I have a few pictures that I refer to as more from the Parisian school of street photography. This would be one of those. A romantic but detached moment on the street.

There’s a painting by J. Singer Sargent called Madame X that I have always loved. When it was first shown in 1884 it created quit a stir since it featured a woman with one strap of her evening gown hanging down off of her shoulder. It troubled his patron enough that it was touched up so that the final version of the painting (as it can be seen today at the Met in New York) has the strap of her dress firmly up on the young ladies shoulder. When I was looking at this girl and saw her strap fall off her sholder, I thought to myself: 'This one is for J. Singer Sargent.' " 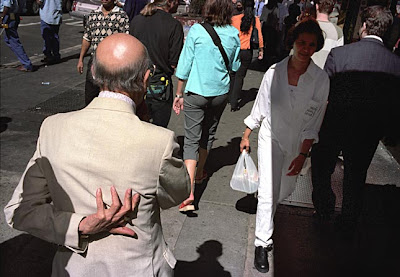 Scratch
"I made most of these pictures on my lunch breaks while working a fulltime job in midtown Manhattan. Some days I had a lot of time to shoot and other days I had ten minutes. This forced me to try and see and feel something in less and less of an 'event.' The act of going out to shoot was me trying to get some exercise and nourishment – it was me trying to reach for an itch that needed scratching. I saw this gentleman trying to scratch an itch that was just out of his reach. I followed him for a few blocks and remember passing him more than once. Shooting him from the side, the front - burying him and his gesture into the crowd – but it was this simple picture that I liked best. There are few things in life as satisfying as scratching an itch that needs to be scratched." 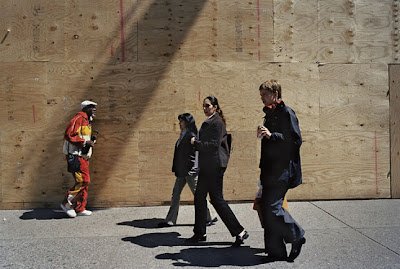 Spotlight
"I often get seduced by the light at a specific location and then decide to stay and work there. One thing I think about often is how generous the sidewalks of New York are. If you have an idea for what you might like to see . . . and if you are ready for it . . . it often comes. I knew that I wanted to play with that shadow on the wall - and make it feel like it was a beam of light. I had to wait a bit for the sun to move so that the shadow would just skim across the wall but the sidewalk would still be illuminated. Once that came together it didn’t take long for a set of protagonists that interested me to arrive and fall into place. If you know what you want – you are ready for it when it comes."
Posted by Blake Andrews at 9:35 AM

great photos and the words are important. thank you.