It must be 80s week because after devouring A Summer's Day my next photo book was Hockney On Photography. This is basically an illustrated transcription of 5 years worth of conversations between David Hockney and photographer Paul Joyce that occurred in the mid-80s during the period Hockney --who made his name as a painter-- was experimenting with photo collages.

I have to say this book has turned out to be much different than I'd expected when I first picked it up at Powell's. I've always liked Hockney's photo collages, especially the Polaroid grids. They show a very unique vision. The texture of the polaroids makes them feel somewhat like sculptures, and something about the Polaroid color in a grid with Southern California light is really magical. So I dove into the book with anticipation thinking it might shed light on his process. 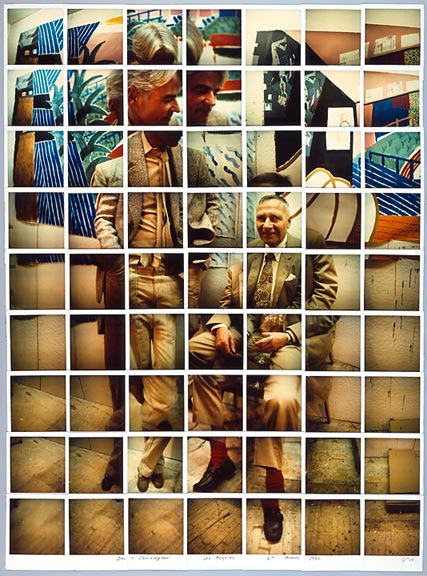 
While the book offers insight into Hockney's process, what it does mostly is trash photography. Photography will never equal painting. Photography is only good for mechanical reproduction. Photography can't show time. Photography never did this and will never do that, etc. If you are looking for a pat-on-the-back book about how great it is to be a photographer, this ain't it.

In hindsight I should've expected something similar. After all, Hockney is a painter first and foremost. Photography was just a passing phase for him. As for Paul Joyce, I don't know his work but as a photographer you'd think he would stick up for the art. Instead, he plays the fawning foil. Sample dialog:


PJ: It's difficult to be an artist as good as you are and be able to cope with it, isn't it?

DH: Yes. If I found it difficult, then everybody else certainly will...There's not that many people who are willing to spend that kind of concentration and time on one particular piece.

PJ: Certainly not photographers, because they haven't got that built into their consciousness...


PJ: I honestly think that photography is no longer the same after this work of yours. I'm absolutely convinced of that.

DH: I know that. It cannot be the same, because so many things have been overcome here.

The main obstacle Hockney thinks he has overcome is the limited perspective of a stationary camera. A single photograph can only show one point of view, usually for a small period of time. "All photographs share the same flaw," he says. "Lack of time." He then goes on to trace photography's misguided view back hundreds of years to the Renaissance and invention of the Camera Obscura. Cubism helped to topple the single perspective in the hand-arts, but with photography it still exists. The idea behind Hockney's grids was to inject multiple reference points into photography, in short to make it cubist. 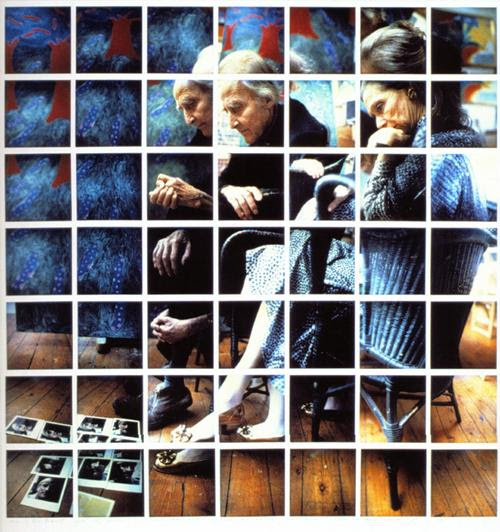 
Whether he was successful probably depends on who you ask. For me, some of them work better than others. In the best ones there is indeed a refreshing variation on the normal single perspective photo. He shows the same subject matter from various angles, juxtaposed next to itself like a jumpcut in film or like, well, a cubist painting. With the polaroids, these jumpcuts are tied neatly into a unified grid, so that looking at the image is almost like seeing through a mesh screen. For me the nonpolaroid snapshot collages, are generally less successful. They seem more haphazard and amateur. For example, consider these two shots of Hockney's mother, the first a polaroid composite and the second from snapshots: 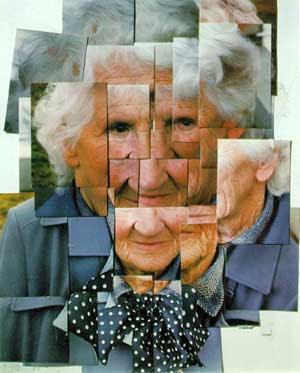 
It probably says something about my personality that I prefer the Polaroid grid. I like things to line up. Anyway, the book isn't so much about his images as about Hockney's sour view of photography. Some of his attitude can be laid to plain old painting-centric elitism:


PJ: There's something about photography which is deeply dissatisfying. And I've been struggling to pinpoint just what that is.

DH: I think you must feel that before you get deeply interesting in what's going on here. There are people, after all, who don't feel that, who think photography is perfectly all right. But for the people who think, the ideas will click. ...A certain cultivation is needed to be able to read painting to derive real enjoyment from it. But photography is different --the number of amateur photographers around runs into millions, doesn't it?...

Later he eases into the it's-all-a-crapshoot dismissal that I think most nonphotographers carry somewhere in the back of their head. I can imagine my inlaws saying, or at least thinking, something like this:


I've seen professional photographers shoot hundreds of pictures but they are all basically the same. They are hoping that in one fraction of a second something will make that face look as if there were a longer moment...If you take a hundred, surely one will be good. It could be anybody doing it...

There are few good photographs, and those good ones that do exist are almost accidental.


Photography has failed...How many truly memorable pictures are there? Considering the milllions of photographs taken, there are few memorable images in this medium, which should tell us something.

Photography can't lead us to a new way of seeing. It may have other possibilities but only painting can extend the way of seeing.


Overall, looking at this book is a bit like looking at an old photo. The 80s were already 20+ years ago --Has it really been that long?-- and there is a certain dated quality to the ideas and images, and to the cultural references. The glasses, the hairstyles, the colorful poolside lifestyle, it all whispers "80s" in your ear. The book would go well with Men at Work or Tears For Fears as background music. 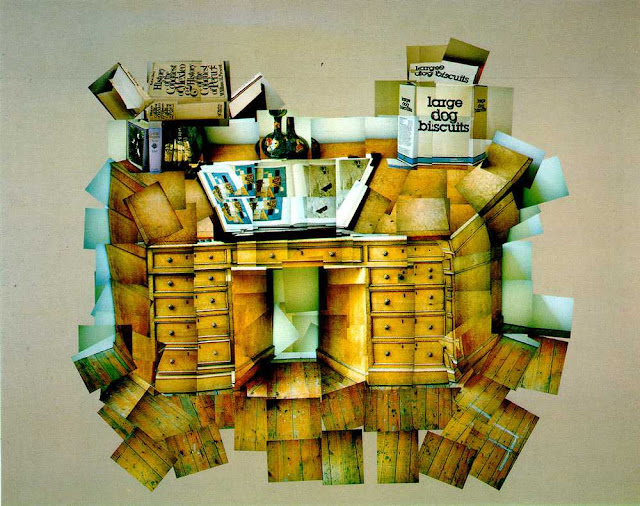 
That said, sometimes photographs prove to be more interesting as they age, and the same can be said for this book. Hockney makes a few astute predictions about the impending digital era. This was in the mid-80s before Photoshopping had really taken off. But Hockney says that the arts and publishing will be revolutionized, and he turned out to be right. He delivers a prescient warning about computerized collage and its threat to photography's claim to reality. Alas his main prediction --that his grid style would revolutionize photography in general and that once people caught on everyone would do it-- didn't come to pass.
Posted by Blake Andrews at 2:13 PM

It's odd that all the interviews of Hockney I've ever read, including most notably one by an otherwise intractable political comentator called Andrew Marr, his interviewers all toady up him shamelessly.

But then, as the quotes you've drawn out amply illustrate, Hockney is just such an irresistably, charmingly modest old coot. ;)

great post, i haven't read this one and will have to do so now.

Great thoughts you got there, believe I may possibly try just some of it.

Thanks for review, it was excellent and very informative.
thank you :)

very useful for A level art research, now I can reference Hockney critically.