Skimming the new Fraction yesterday, this photo by Paul Gaffney caught my eye: 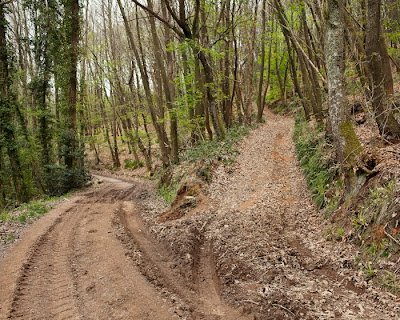 Two years ago I wrote about three photos very similar to Gaffney's, including one of my own.

I don't think anyone consciously sets out looking for scenes like this. Well, I know I don't. But there is something primal in them. When you stumble across two roads diverging, it just looks like a possible photo. Life offers certain forks. They lead in very different directions. It's a metaphor bla bla bla. It's irresistible. That's why if you get enough photographers out there looking at stuff, you're going to wind up with some forking road shots.

But probably not as many as single roads disappearing into the distance. 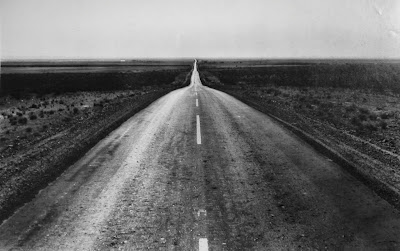 This one is by Dorothea Lange, but this example only skims a fraction of what's out there. I suspect the single road shots have diverging ones outnumbered, and that we can all recall ten similar photos. Can I call the path-to-vanishing-point a typology?

It's a fun game to weave together similar works from photographic history. Photography isn't very old, less than 200 years, yet within that short span some ideas keep recirculating over and over. Maybe they are a form of photographic archetype? David Simonton has curated some great examples recently on his Tumblr. 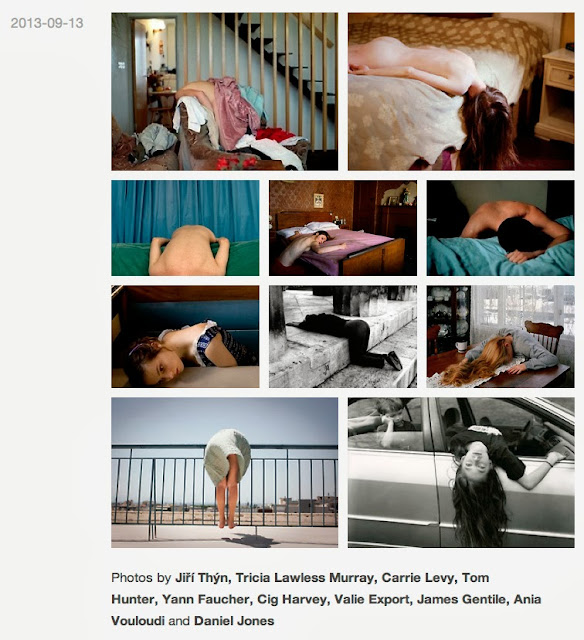 Can I call Figures-in-faux-vomit-gesture a typology? When you see someone about to faux-vomit, it just looks like a photo. And if that collection doesn't float your boat, David has others. It's well worth browsing his Tumblr to find them. Just go in with both eyes open. 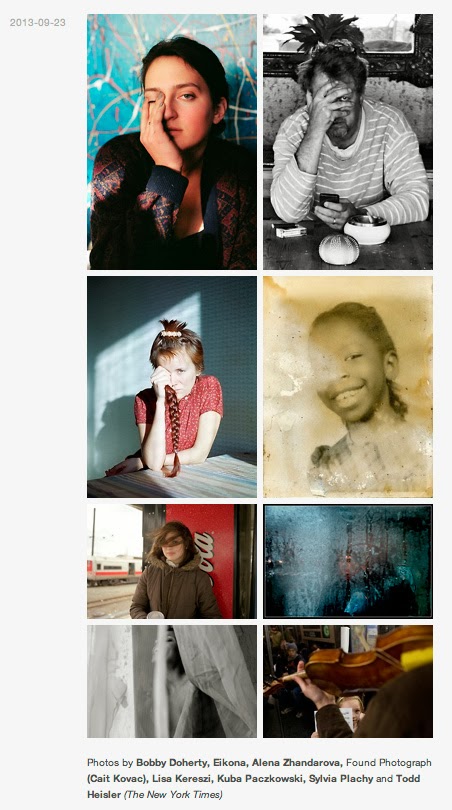 The increasing ease of online image search has opened up huge possibilities here which did not exist 10 years ago. And copyright issues too, but we'll leave those aside for, ahem, later. I briefly played around with this back in 2008, pulling together photos of gas stations and Mona Lisa smiles. Pedro Arroyo has a nice collection of examples here. But as he and Simonton know, it's a lot of work to find and edit these. Sure, the images are out there, but who's got the time?

Sometimes a little extra research can pay off. Phillip Toledano found this out the hard way recently. Turns out the photos in his new project are quite similar to another project from ten years ago. 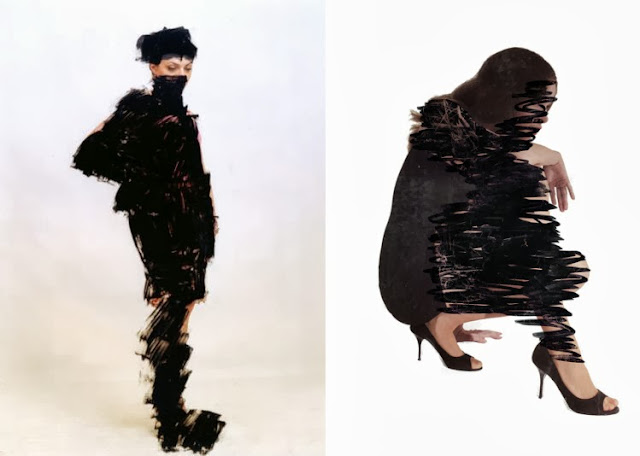 Hey, maybe EJ Bellocq could get in on this? 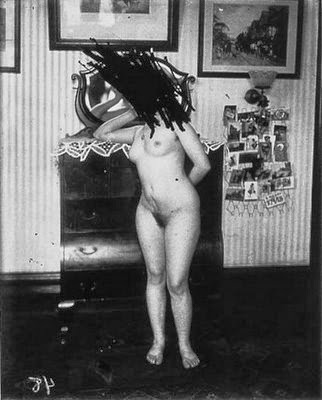 Whatever you choose to photograph, odds are someone's been there and done that. Even blacking out a part of the photo won't help. Sometimes it's entire projects. Ty Morin set out this year to meet and photograph all 788 Facebook friends. Turns out Tanja Hollander had beaten him to the punch. When Dillon Marsh got the idea to photograph cell phone towers disguised as trees, it seemed like a great concept. Who would shoot something as novel and oddball as that? Two people before him, as it turned out (Emily Shur and Robert Voit). Been there, done that. 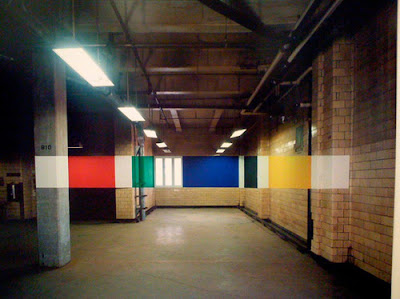 They're quite entertaining. Must've taken him hours. But when all is said and done, do they really say more than John Pfahl's Altered Landscapes from the 1970s? 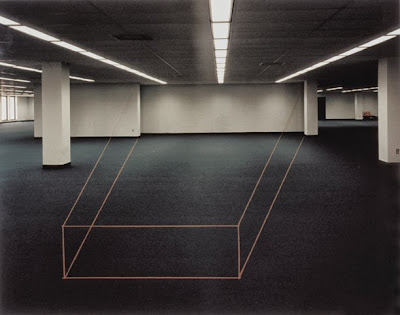 Don't get me wrong. I think these photos are great. But to me they're mostly about the nature of photography. Stand in one spot and the three dimensional world flattens one way. Stand a few feet over and it compresses differently. OK, we get it. We got it 30 years ago. Still fun to play with though, as Zander Wilson's Tree Lines project shows. 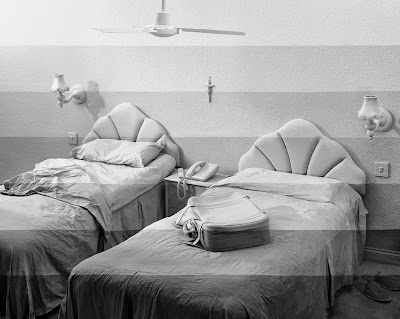 I guess you had to be there. Literally. But that photo just skims a fraction of the scene. Here's how it looks from 5 feet back. 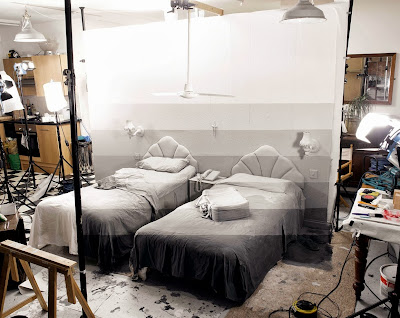 Dude! Freaky. But couldn't the artist have saved a lot of time just Photoshopping shades of gray? Not really, because part of the twist is creating these. As with all the examples above, it must've taken hours. Art requires commitment, man. It doesn't grow on trees.

Then again, sometimes it does. Palíndromo Mészáros found his Pfahl-scapes ready and waiting after a big flood. All he had to do was position the camera. Slacker. But you've gotta admit a scene like this is irresistible. It just looks like a possible photo. 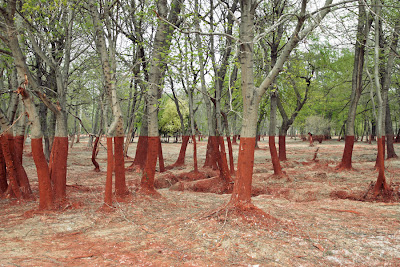 I know this scene came readymade but still, Photoshop might get us there quicker. What if we just take a random forest scene and paint the bottom red? 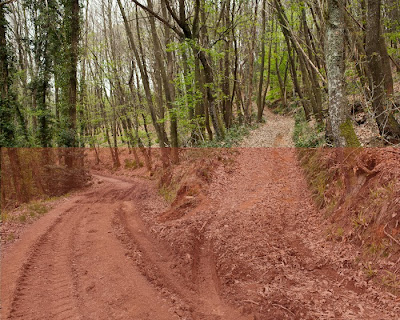 On second thought, screw that. Why not just take the whole blog post and paint a fraction red? 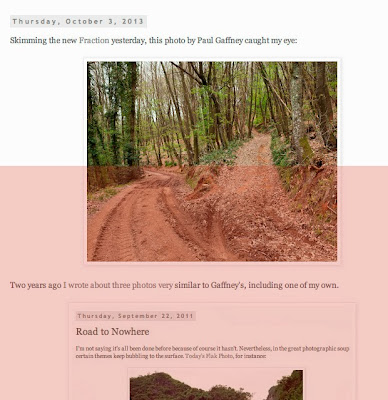 Damn I am saving time now! I'm cutting out all the middle steps. And it doesn't even matter where the camera is positioned. It looks the same. But I lost my train of thought. What was my point again? Something about bedrooms? Parking garages? No, diverging roads, silly. Archetypes and shit that's been done, that there.

Sigh, I guess that's why most people only skim a fraction of these posts.

Only a few make it to the brown gooey stuff on the bottom.
Posted by Blake Andrews at 9:24 AM

The brown gooey stuff at the bottom is the best.

There may be an odd bias at work in some of these cases. It's only when someone either imitates a style, technique, or subject that is very unusual or arrives at it independently that it is even noticed. When a style is pervasive and widely imitated, we cull the best of it for our museums and call it an important movement.

There may be an odd bias at work in some of these cases. It's only when someone either imitates a style, technique, or subject that is very unusual or arrives at it independently that it is even noticed. When a style is pervasive and widely imitated, we cull the best of it for our museums and call it an important movement.

HAve you read Geoff Dyer´s book "The Ongoing Moment" (Vintage books-2005).
Going through the history of photography and it´s recurring subject archetypes. The Lange road turns up in his book as well. He is more focused on "the great masters" and how they refer to each other, but in a way, like you talk about here, all us photographers do this. It is just being human, and taking part in tradition.

Now wait. I am pretty lost. I have this
http://zenteno.photoshelter.com/image/I0000OzIiUGDBM9M
Did I win something?

Good post.
Right you are to point to David Simonton's tumblr. In addition to his own fine work, he puts together some very interesting match ups. If you don't already follow http://mpdrolet.tumblr.com/ you might find a similar but more subtle approach toward the same ends.