My digital bubble has been intruded on lately by a few photos from the real world. First of all, this nice photo arrived out of the blue last week from Jennifer Shaw. 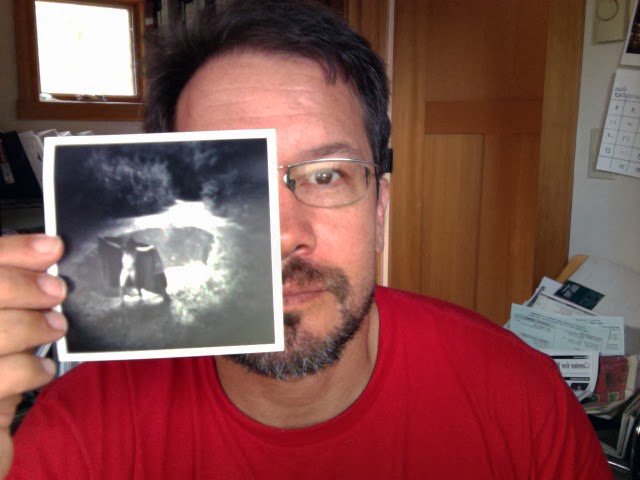 It's an actual darkroom print. Who the f- makes those anymore? Wait, don't answer that. Not to mention, who shoots naked kids? Somehow Jennifer had me pegged.

The photo came with a note, Thanks for viewing my work at Photolucida, etc etc. Ah, so that's it. I'm not sure if she sent one to everyone she met there. If so, wow. Because silver gelatin prints take time to make. Five months, judging by the time since that conference. But it's probably worth the investment on her part, because that's the type of memento that makes an imprint. I know I'll remember this shot, and the feel of it in my fingers. Too bad I don't run a gallery or magazine or something, but at least the blog is no longer defunct. A jpg here will have to suffice as partial thanks.

The second intrusion came courtesy of Chris Ward, a local Polaroid savant working out of his apartment in Eugene. There aren't many people left who will work on old Land cameras, but Chris is one of them. People send him old cameras from all over the world. He fixes the ones which can be salvaged, sometimes in surprising ways, and always with care. Here's one with mock alligator skin cover and hardwood (walnut?) chassis. 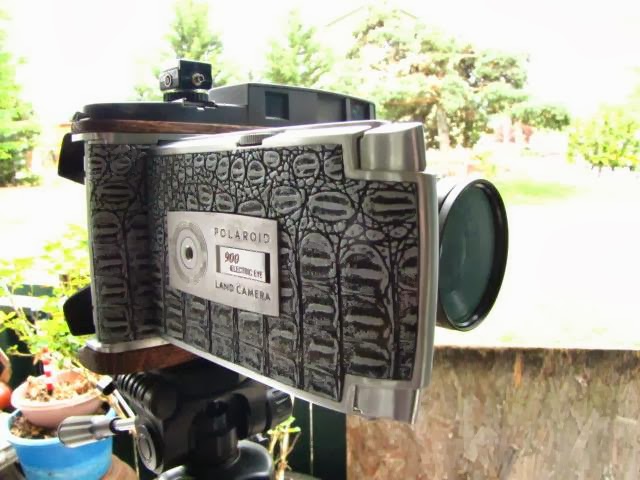 So you probably can guess what happened. I met Chris at Dot Dotson's a few months ago, one thing led to another, and now I own yet another camera. Not one of the fancy alligator skin jobs. Just a simple Polaroid 230 in good working order. Of course Polaroid isn't around any longer to make film, but Fuji's FP-100c works just as well.

There's a bit of a learning curve with this camera, and I quickly wasted my first pack blustering forward, then reversing course to read the instruction manual, pulling the wrong tab, misfocusing, pulling the backing off too early, then too late, cursing, and getting gooey developing gunk on my fingers in the process. Hey, this ain't a point and shoot. It's more of a point and shoot and pull and wait and wait and peel. And if the process isn't instantly obvious, maybe it's a sign I need to point and shoot and pull my head out from behind a screen.

So I have no photos to show for now but more film ordered. The plan is to get hands-on instruction from Chris before wasting more film. I even went all out with the next shipment and got the dragon skin film backing. Probably overkill, but I figure if shit's getting real let's go all the way and slay the main fantasies. I'll deal with the goo later.
Posted by Blake Andrews at 4:40 PM

Thanks for catching that, Suzanne. I've had some quality control issues since outsourcing the blog to Bangalore. Please rest assured, the link has been fixed and the responsible party dealt with.

I checked now and I liked the photos of Jennifer. Congrats and stay printing. This post just arrived in a moment that I am going to left apart my print darkroom cause I can't get a good washer for prints in between other place inconveniences. Anyway, thanks to all. I like to see that spirit.