I've been enjoying the new spate of Elliott Erwitt color shots making the rounds lately (here, here, and here). Haven't seen the Kolor book yet but it looks promising.

"Black and white is a reduction of things. Color is an illustration of things," says Erwitt. I suppose that's one way to look at it, but his photos are evidence there's more to it. It's not so much about reducing or illustration. It's about nailing the shot. For some reason Erwitt seemed better able to do this in black and white. Take this Siberian wedding scene for example. 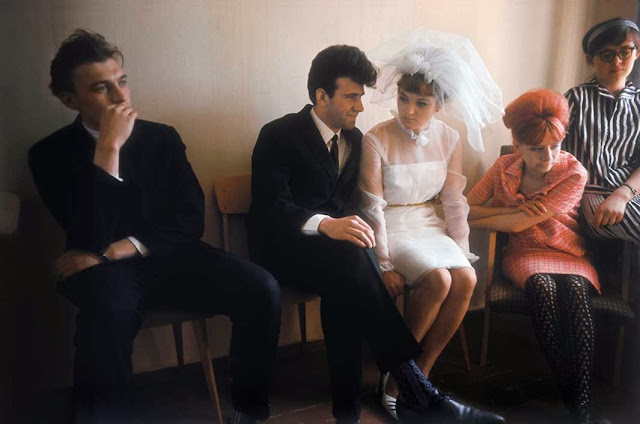 It's a nice enough image, but it doesn't compare to this. 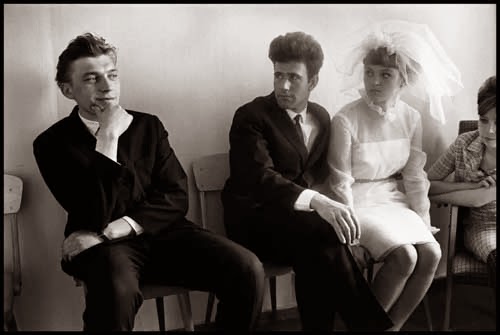 The same thing is true about Erwitt's famous confessional photo. Here it is in color. 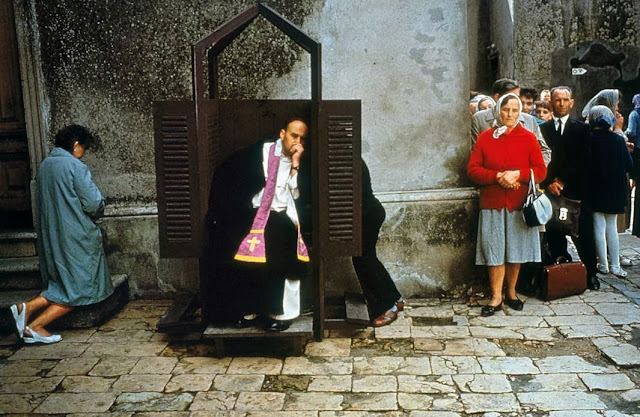 And in black and white. 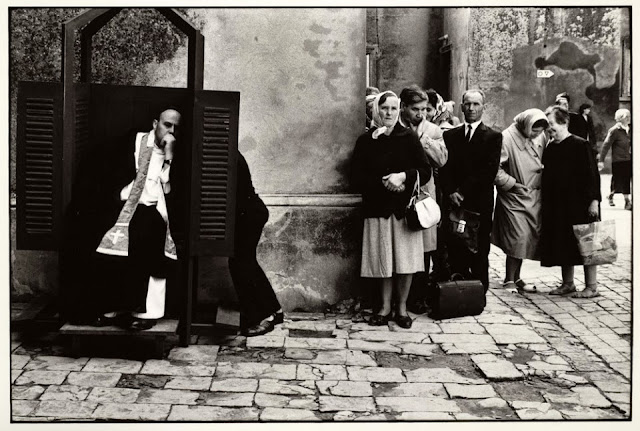 Again, the power of this image doesn't rely so much on color or lack of it, but on how he's framed the situation. By eliminating the character on the left, he's cleaned up the scene and put an ironic twist in the narrative. That's the sort of subtle shift that separates merely good photos from transcendent ones.

What I can't figure out is why? He's carrying a few cameras, one with b/w and one with color film. The film type shouldn't have any effect on how he frames the scene. It shouldn't effect the moment. But somehow it does. Is it because he subconsciously cares more about the b/w camera, that he knows it will allow him to tap into magic? Maybe.

I think there's an aspect of looking for photographs, a sense of optimism, that can be very powerful. If you know there's an image in a scene, often that knowledge will release the photo. And I'm guessing that sense of optimism, fundamental to good street photography, was more powerful for Erwitt when he shot b/w. I know that's the case for myself. When I have color film in my camera, the world presents itself differently through the viewfinder. It's illogical but true.

But I'm just speculating. Who knows. Maybe the book will help me sort it out, or at least provide some more examples.
Posted by Blake Andrews at 10:09 AM

Completely agree with you on those two pictures.

I have the book in my hands right now, and it has a lot of great material. But a lot of not so great material. And, as with many of Erwitt's books, I'm not a fan of the reproduction style. Some photos are printed far too large for seemingly little reason. Photos that are printed double truck are rudely interrupted by the book's gutter.

With all that said, I'm happy with the purchase because it does give an interesting look into Erwitt's photography outside of his main bodies of work. His sense of timing and humor are still apparent in many of these photos.

I wouldn't classify this as a "must have" for a photography fan, but I definitely would for an Erwitt fan. Hope you enjoy yours!

" The film type shouldn't have any effect on how he frames the scene. ... But somehow it does."

It looks to me like different focal lengths on those two cameras were playing role here and made the whole difference, not film type. IMHO, with much wider angle on cam with color film he wasn't able to clean the scene (assuming shooting position was same in both pictures).