I've been home for a few days now and memories of Belgrade are beginning to dim slightly. I need to wrestle them back into lucid form and write them, but the task is daunting. It was an intense experience not so easily described so I've been putting it off.

Perhaps it's simpler instead to trace just one small slice of the trip. In an outdoor flea market near the Danube I found a booth selling strange packs of old photos like this: 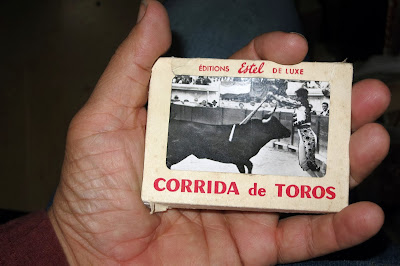 Each pack was 6 x 9 centimeters and held about 25 photos. They reminded me of baseball cards. But they were real photos on fiber paper! 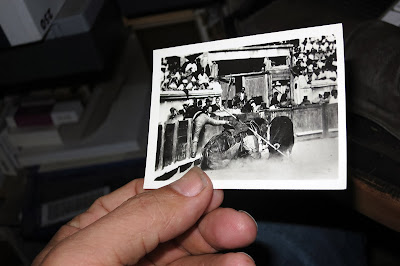 Some had captions on the back. I guessed they were from the 40s or 50s. I'd never seen anything quite like them. They must've taken an intense amount of labor to produce. I was smitten. I spoke no Serbian and the seller spoke no English, but through hand signals and periods of waiting and pacing we managed to settle on a price of 1000 Dinars for the whole lot. About $12. I think he was happy to unload them, and I was very happy to take them home. I got about 30 packs. They fit easily into my luggage. 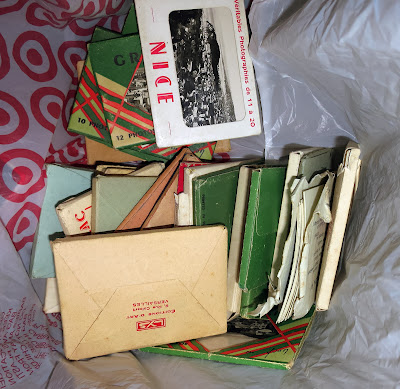 The top photo above shows a pack of bullfight photos but that's the exception. Most of the rest feature a French city. There is one for Nice, and Marseilles, and Paris, and so on. The Chamonix pack is spectacular, with views of Mont Blanc and the surrounding glaciers, and elevated gondolas going to the sky. There's one for every major French city, and each one is like a little museum of history, showing various streets and sights. Maybe they were produced as tourist mementos? I'm not sure.

The photos are small but somehow they have enormous depth. I can look into them from very close and the scenes recede effortlessly with no loss of resolution. It's the 40s equivalent of a Retina screen. Who says art must be wall-sized?

The French cities are beautiful but my favorite is the bullfighting pack. Corrida de Toros. I've never seen a bullfight, and I think these photos are about as close as I'd like to come. The whole scene is horrific but --how can I say this?-- sort of glorious too. And the photos are right on top of the action. 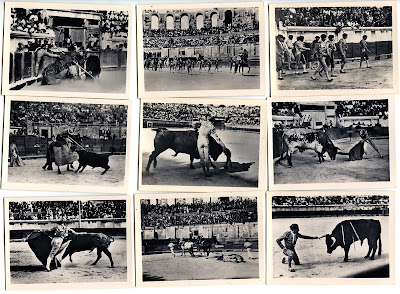 How did these photos wind up among a pile of French cities in a Belgrade flea market? I have no friggin clue. But anyway I have been taking my time to slowly savor them all. Not just the Corrida de Torros but the cities. I know which ones I want to keep, and I think the others will make nice gifts.

More on Belgrade soon. I know I need to round up my memories, drive some stakes in and put markers down. It seems too big to tackle now, but I think some amount of forgetting will make it easier.
Posted by Blake Andrews at 12:06 PM