My Diana strap is too short to hang the camera comfortably around my neck, so what I like to do is keep the strap wrapped tightly around my wrist with my camera cocked in my right hand, like so. 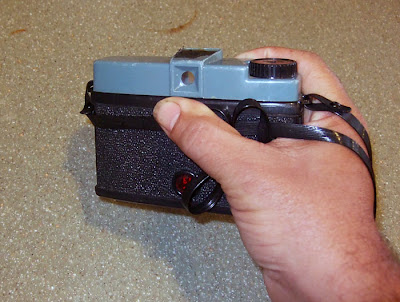 For some reason this reminds me of Tefillin. 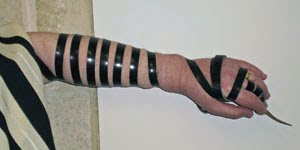 I imagine phylacteries have some of the same tactile feeling as a Diana strap, which is thin and shiny and has a certain willfullness about it. It doesn't just fold up like string. It has to be bent.

Even the shape of the Torah box looks a bit like a Diana camera. 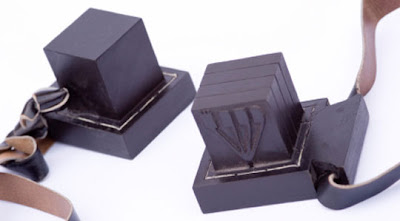 Couldn't those be spy cameras? No? What about this 1906 cylindrical Torah box? If I showed you this picture with no caption, would you guess camera or prayer box? 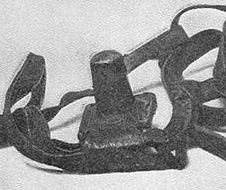 Of course a camera can be a sort of prayer box. I won't claim that using a Diana is a religious experience but it is meditative. To get good stuff I need to find a place of mindfulness where I can empty my brain, so that whatever I see can hit it just right. Maybe it's a stretch to call that praying but it's along the same lines. Lines that have to be bent.

It's not the same with my Leica. 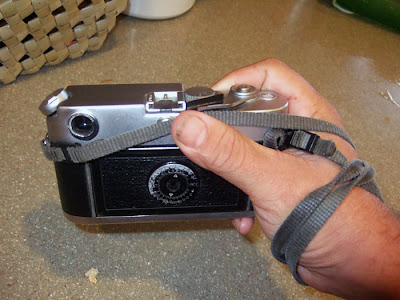 The strap is limp and grey, functional but with no personality. Maybe that's why I never strap it to my arm like tefillin. Instead I string it around my neck or around head and shoulder where the viewfinder is never far from my eye. The prayers come not during shooting but afterward. Sometimes they're answered but when and where is pretty much a crapshoot.

I guess you could call me a lapsed Jew. Or, in photographic terms, a time lapsed Jew. Like many photographers I come from Jewish heritage. But orthodoxy and groupthink make me uncomfortable, so I have a hard time fitting religion into my daily life. I've never worn tefillin in my life, nor even touched it.

If I ever consider Judaism it's usually this time of year around the High Holy days, a time of reassessment and renewal. Leaves are browning. Rain is here. Apples and honey beckon, and then it's time to begin buttoning up for the dark season. But before that happens, this Saturday if the weather is good I'll probably take a long hike in the woods with a Diana strapped around my wrist.
Posted by Blake Andrews at 9:23 AM

Anonymoustein has a nice ring to it don't you think?