Shoot every person that passes.
Keep moving —never stop to frame your subjects.
Never make eye contact —Give them permission to stare by looking the other way.
Dont try to attract people's attention.

This was Kevin Michael Connolly's guide as he wandered around the world shooting 32,000 photos. A typical street shooting agenda? Maybe. What made Connolly's unique is that wherever he went, he became the center of attention. Virtually everyone he passed stared back at him, and here what they saw. 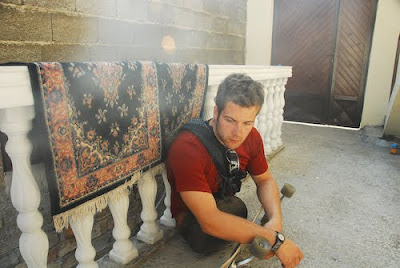 Self portrait by Kevin Michael Connolly
Connolly was born in 1985 without legs. Although he wasn't held back by that fact, it did form much of his identity and especially his photographic practice. Riding around on a skateboard with his hands wrapped in ducktape treads he was a magnet of curiosity, and decided to capitalize on that fact by shooting the world looking back at him. He covered 15 countries. The resulting photos are as much a portrait of him as of the people he shot. 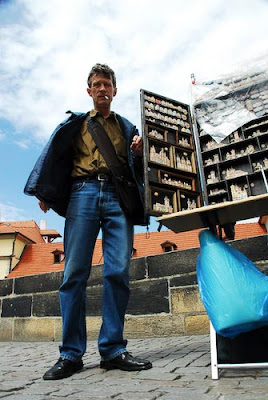 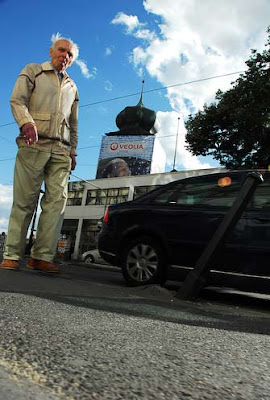 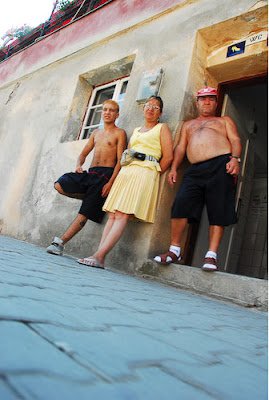 The world looking back at him seen from ground level on a moving skateboard. That's how Connolly sees the world everyday. Or is it how the world sees him? Looking through his portfolio I found something strangely mesmerizing about their uniformity, a photographic record of the quip, "Wherever you go, there you are." True enough. It's what makes travel fascinating and, eventually, tiresome. Might the same equation apply to photography? Connolly probes the idea.

Connolly's story is recounted in his recent memoir Double Take, which I just finished. Normally I'm not sure people in their early 20s should be writing memoirs, and this one is burdened with the mundane experiences —roadtrips, friends, adolescent romance— that might be expected from someone that age. But Connolly's perspective is unique enough to give it a twist worth reading, especially if you're a street shooter.
Posted by Blake Andrews at 8:58 AM