David Solomons: What Was He Thinking?

David Solomons lives and works in London. More of his work can be seen at In-Public or in his two photography books. 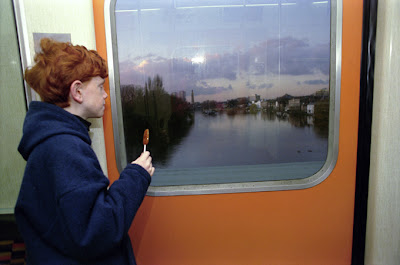 District Line, London, 1995
"I took this as part of a project I was working on when I was a photography student at Newport. I’d been directly inspired by Bruce Davidson’s Subway series and wanted to do something similar on the London Underground. It had been a long day’s shooting and I had pretty much called it a day and was making my way home from Wimbledon. Most of the network is underground, so I’d been concentrating on the interior space so I didn’t remember the train crossing the Thames at the time. I was quite struck by the brightness of this boy’s hair against the bright orange door of the tube carriage. As I was using a flash, I would often study the carriage for a while and maybe move around it until I saw something I liked then take just one shot. I usually changed carriages once the train pulled into the station and the process would go on like that." 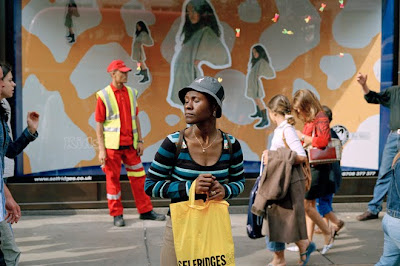 Oxford Street, London, 2002
"I had been trying to think up a street theme I could do in London that would work as a follow up to my Underground series. As I often found myself drawn towards the West End, the term ‘Up West’ came to mind and I thought that would make a good title for a project. It motivated my efforts into concentrating on that specific area of London and this is one of the earliest shots I took specifically for it. One of the first themes I felt I needed to tackle was shopping and the obvious stomping ground for that is Oxford Street.

I was loitering around Selfridges and noticed this woman standing by the road. I liked the brightness of the scene and approached her from her left side standing about six feet in front of her. I felt it was going to be a one shot deal as she would see me as soon as I raised the camera. This was one of those situations where I had to quickly survey the background and choose a moment which eliminated most of the dead space but I only gave myself a few seconds and then it was just a case of getting the lady in the middle of the frame, shoot and move along. Often in these situations you get some untidy distracting element in the composition but I got very lucky with the mirrored arms on the edges of the frame." 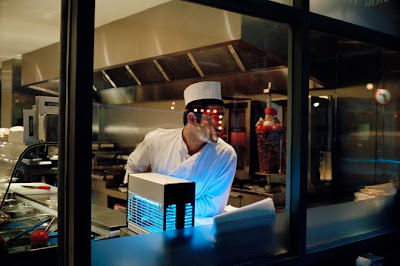 Wardour Street, London, 2002
"I knew from an early stage that a major part of my Up West series would cover nightlife. Shooting under artificial lights with fast film presents its own technical problems and I was reliant a lot upon the light emanating from various establishments. I came across this take away shop in Soho and was attracted to the cool glow of the electric fly killer on the worktop. As I approached the scene the guy looked out the window and I took the shot and that was it. I didn’t notice the lights on the other side of the road reflected on his face at the time but after I scanned the neg, I thought it somehow illustrated the robotic nature of much of the work people have to do to make a living." 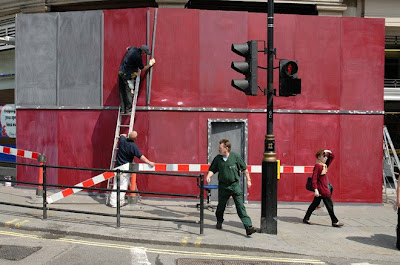 Whitehall, London, 2007
"I was with a friend when I took this one, which was something I never used to do but I find it breaks up the monotony sometimes and often some unexpected compositions can come out of it. We were about to cross this road, when I noticed the guys working on the ladder and the construction boards seemed to make a nice backdrop, almost like a theatrical stage. I framed the shot to include the whole board and I was there for about 10 seconds when the man in green overalls and the woman walked through the frame. Normally I might have stayed at the scene for a minute or so to make sure I had something decent, but because I was with a friend I probably felt a bit more rushed. That’s one of the advantages of using digital as I was able to check if I had a good shot. It looked good enough and we moved on. I’ve since gone back to using film for Up West though as I thought my work was becoming more detached from the subject when using a big DSLR." 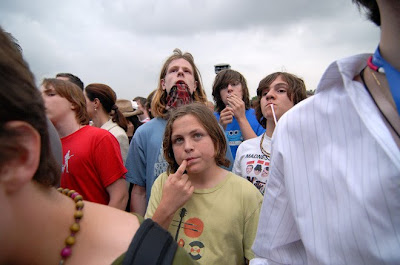 "I hadn’t been to a concert for ages and I’d recently gotten this 12-24 super-wide zoom for my D200, so I knew before I went that I wanted to get some close crowd scenes. I was about a dozen rows back from the stage and it was almost impossible to move. I looked behind me and I think it was the kid in the Madness t-shirt who first caught my eye as I thought he was really cool for liking an old band that I had loved when I was about his age. We had to wait about 20 minutes or so before The White Stripes appeared and I managed to shoot off about a dozen frames in the space of 30 seconds or so. I’m usually quite sensitive as to whether people mind a camera shoved in their face and I assume most people do, so I try to make the shot as quickly as possible until I sense any discomfort, then I stop. The gig was terrific." 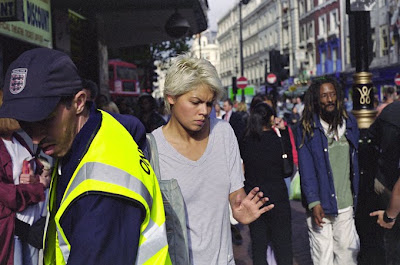 Coventry Street, London, 2003
"I thought it was worth trying to capture the crowded and congested aspect of central London so part of this shot involved some planning. One of the difficulties I found with taking a picture of someone walking directly towards you is that they move aside before you can get close enough to shoot. So I developed this technique where I would approach the subject from the side then suddenly walk across their path in order to get the shot.

In order to try to capture a congested scene I tried on many occasions to intentionally be right in the middle of it, with my camera permanently glued to my face in case something appeared suddenly out of nowhere and I could react to it immediately. This was exactly the case in this shot, where I just pressed the shutter immediately after I noticed this girl bumping into the road sweeper. You can’t exactly vouch for getting a good composition at all in these circumstances as you’re more reliant on your reflexes just capturing what went on in front of you." 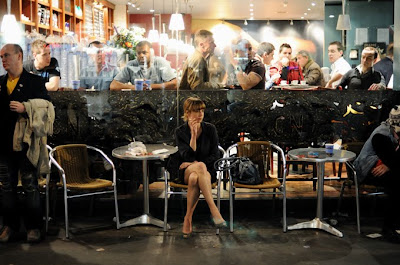 Old Compton Street, London, 2008
"I had recently returned from a trip to New York and was out on a shooting/drinking crawl with a couple of friends. We came out of The Greyhound pub around midnight and walked up Old Compton Street, which is the main gay street in Soho and a really lively place to be of an evening. I immediately saw the woman outside Café Nero and thought she looked quite isolated the way she sat outside surrounded by a dozen or so men not taking a blind bit of notice of her. At first I saw it as a simple shot for a smoking series I was playing around with at the time but later I recognized its significance as an important part of the ‘Up West’ series as the gay scene was one aspect I had wanted to cover but had up to that point failed to do." 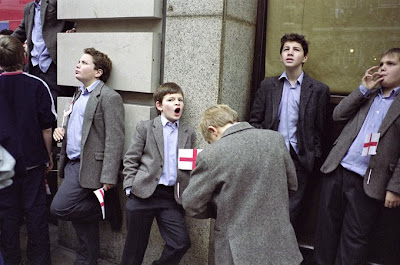 Haymarket, London, 2003
"England had recently won the Rugby World Cup and there was a victory parade celebration that took place during the week. There were loads of people at work craning out of their windows to get a good view but I was more interested in people waiting for the bus carrying the players to come round. It was obvious that many people had been waiting a long time in their designated spots and I noticed this group of boys who looked like they would rather be back at school. Because of the historical nature of the event (England hardly ever wins anything) I found it a lot easier to point my camera at people as they were expecting it more. I shot about a dozen or so frames and hadn’t even noticed the middle boy yawning when I did so. I think I took one picture of the team bus as it went by a few minutes later." 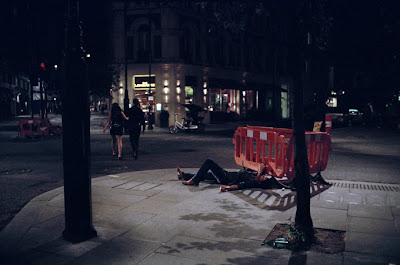 St.Martins Lane, London, 2009
"This came out of a rare early morning excursion into town. I was looking for people who were a bit wasted but didn’t want that to be the sole point of the picture as I think it’s a bit obvious. I was really drawn to the way this guys leg was bent which made a good point to anchor the picture, while I used the sweeping curve of the pavement to create a dynamic design element to the composition. But the overall scene didn’t seem complete somehow, so I waited for other people to perhaps take pity on him or something but luckily this couple just happened to walk through the scene and I ended up with something that I totally didn’t expect. Later when I exhibited it at Third Floor Gallery in Cardiff, a friend of mine remarked how it resembled a sort of theatrical tragedy, that the guy on the floor had somehow lost the girl to man walking away with her." 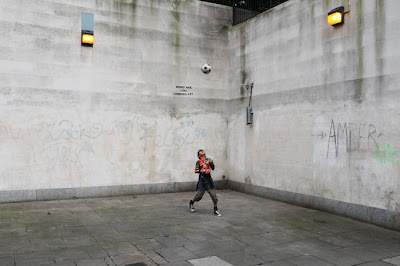 Marble Arch Subway, London, 2008
"I have a good friend to thank for my getting this picture as she had developed some stomach pains while we were relaxing in nearby Hyde Park. We headed for the nearest toilet, which was situated in this now closed off subway. I remember it was a Sunday and as I was waiting outside for several minutes I saw this boy playing keepie uppie. There were lots of other people passing in front of the camera so I had to wait for people to pass by before I could get any shots. I think I was shooting him for about four or five minutes before I was able to get the shot I wanted. When my friend came out of the loo she was puzzled as to why I had a big smile on my face so it was a case of someone else’s misfortune working to my advantage."
Posted by Blake Andrews at 8:43 AM

Great read. Interesting to hear how David thinks (& drinks ;-). I love the "What Was He Thinking" series Blake.
Such a good idea.

Excellent to have these insights. Thanks David and thanks Blake.