While attending Binh Danh's Daguerreotype workshop last month, I learned a little about his chlorophyll series. Dahn uses the leaves of various plants as printing out material. He places negatives on the leaves --still attached to their living stems-- and exposes them to sun over the course of several days. Dark parts of the negative block the leaf from photosynthesizing, and these cells die and turn light. Light parts of the negative allow light to pass through and keep the cells green. The result is an imprint of the image on the leaf which Danh then archivally fixes in resin. 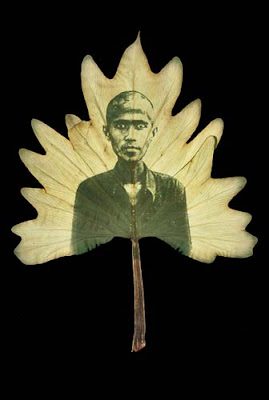 Listening to Danh describe his process it struck me that you could do the same thing with human skin. By attaching negatives to your arms or legs over the course of many days you could maybe generate an imprint. I tried this with some Diana negatives but the whole thing was problematic. The negatives wouldn't stay in place. They looked funny. Even if I'd succeeded I'd have no way of preserving the images. I gave up.

Then I realized that I didn't need any negative. Every summer I naturally generate records of the objects covering my skin. Here's where my watch sits. 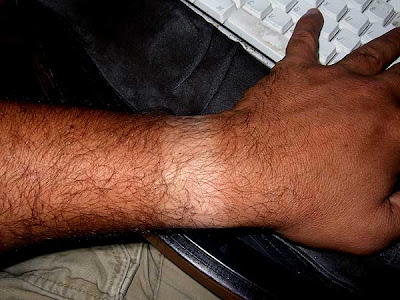 From about May to October, the only shoes I wear are a pair of Chaco sandals. By late summer my feet look something like this: 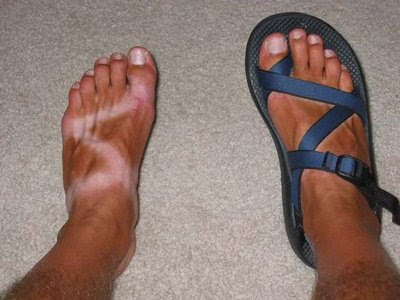 These marks are fun but fleeting. There is no way to fix them and by December they're gone. But I think they hint at the essential power of photographs. A photograph is an impression of one thing upon another which then becomes a relic of the original thing. Sometimes it is light impressing on film, or it can be a leaf or skin. It's the interaction that later fascinates, the realization that something happened.

My friend Faulkner has this great old couch passed down from his grandmother. The other day I set my camera down on it without thinking. When I picked it up less than an hour later, there was a perfect imprint which we then both scrambled to photograph. 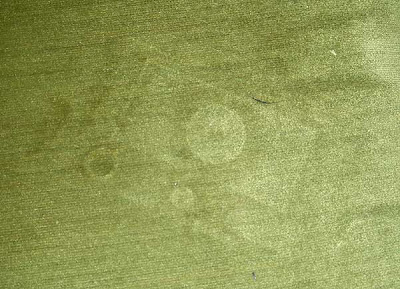 As with the tan-lines this impression was shortlived, gone within a half hour. To make an imprint that will last for ages requires more investment. Take Winogrand's last M4 for example: 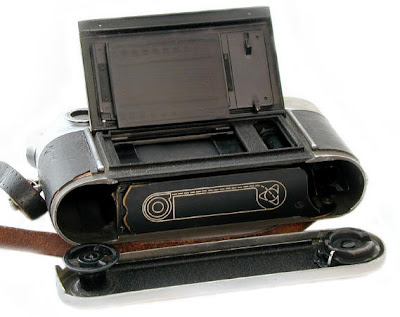 The pressure plate shows sprocket marks which were slowly imprinted over the course of thousands of rolls of film. Looking at this image you can't deny something happened! Hundreds of thousands of tiny somethings happened, leaving a visual record more archival than any photograph.

The urge to leave some imprint is a major motivator for many photographers, or for ambitious people in general. We all want to leave some mark behind. We want to fix it as permanently as possible. So we create prints that last 100 or 200 or 300 years or whatever the standard is now. In the end I'm not sure there's much difference between those artifacts and a couch imprint gone in a half hour.

Perhaps the best way to measure the mark of a life is by examining one's tan-lines. If you don't have them you might want to reconsider how alive you are.
Posted by Blake Andrews at 7:42 AM

Great article and even better last sentence. Being a computer programmer sitting in front of the computer most of my time I usually don't have much of a tan line anywhere in my body.
My wife and I, though, just came back from a 20 days long cross country road trip from NY to SF and when I looked at my arms, my feet and my face I had suntan lines all over my body. Your words are so true...

Not only about suntan but also about leaving a trace, a sign... I think this is why digital photography doesn't really satisfy me as much as film used to... Everything is so volatile when it gets to digital and it's so easy to disappear. How many time we have heard someone say "OMG! I lost everything! All my data is gone!" Granted that you could be losing negatives and prints as well, like it happened to my father due to floods many years ago, everything that is digital doesn't really exist, does it? It's just a faint magnetic trace on a disk somewhere, a trace that no human can see nor read directly unless there is a computer there ready to interpret those data for us...

Just a couple of days ago we were at the office and we were talking about how little things last in the digital era. A friend who is a designer was saying that most of his web design work he has done in the past 10 years is already gone, not online anymore, replaced by some other designer's work. And even the original files sit in some external hard drive that no one has turned on for years.

Your words make me very nostalgic of the feel of having something in your hands, of leaving that trace on that pressure plate. In the digital world not even cameras would ever last long enough to leave a trace.

The only trace I am apparently leaving is a consumed keyboard and a mouse that has its buttons shinier where I touch them with my fingers when I click... how sad is my life...

These marks are fun but fleeting. There is no way to fix them and by December they're gone. But I think they hint at the essential power of photographs.