As 2017 draws to a close it's time to look back and take stock. Politically the year was an annus horribilis. In fact it was perhaps the most horribilis of all past annuses. A terrible horribilis no good very bad annus, if you will. If you're reading this post at some point in the future, trying to get a sense of what things were like way back in 2017, let me tell you. America's government is currently held hostage by a spraytanned used car salesman. He rules impulsively like a child-emperor, and we're enslaved to his every twisted whim. But sadly this isn't an HBO script. It's our waking reality.

Future readers, drop everything this instant and get in your time machine. Come back to save us now! Unless of course it's already too late. Perhaps you're far enough in the future that the child-emperor has bankrupted the country or started WWIII and you're living in caves, excluded from the few viable wealthy enclaves by electrified border walls. In that case there's not much to say. Dig through the rubble until you find a good book. Maybe you can find an old couch to read it on. Sorry we trashed your country. Hey, nothing lasts forever.

But enough about the terrible horrible no good very bad orange conman. Let's talk photos. 2017 threw me a few curveballs. The first half proceeded without much fanfare. Good times in Oregon, LA and SF, a few photo exhibitions, many exposures, ....Then boom! In July Newspace went belly up. I was as shocked as anyone by the sudden closure. In addition to being the de facto nerve center of Portland's photo scene and a regular gallery stop, Newspace housed the community darkroom where I'd been printing once a week since it opened in 2002. Within ten days they'd shut down and sold off everything at auction prices. If only it were a midsummer night's dream. But alas, it was all too real.

My printing ground to an immediate standstill. Meanwhile, the shooting went on. The gulf between exposure and print yawned wider. At one point it seemed bridgeable. But now, probably never.

I've since revived my printing process at the local University of Oregon darkroom but it's not quite the same. There's no local printing scene and I never run into other photographers. The equipment is funky and I'm restricted to tray development, which means I can print at most 25 negatives in a session. This compares to maybe 75 or 80 negs in a day using two enlargers and the RC processor at the old Newspace. Long story short, in 2017 my print production slowed waaaaaaay down. I doubt it will ever return to earlier levels, and maybe that's a good thing. I was out of control there for a while.


With my print production crimped, I decided to fold up Penonomen where I'd been posting daily b/w workprints for the past few years. Honestly the end had been brewing for some time. Tumblr was once quite active, but it has hollowed out recently as photographers have flocked to Instagram. As we enter 2018 it's essentially a photo graveyard. If a photographer posts photos in the woods and no one sees them, do they make a sight? I'm not so sure. At one point I could convince myself it didn't really matter, that I was mostly posting photos for me. That was kinda true, and still is. But a little feedback once in a while wouldn't be so horribilis. Tumblr offered almost none. In June I left, pretty much for good.


It was the same story with B. For the past few years the blog had bogged in the throes of my mid-blogging crisis. What was I doing investing time and energy into something which offered no money, feedback, or prospects in return? At one point it offered some minor sense of community, but that had faded as well. I could tell myself it was mainly for me, just like Tumblr.

But still. Social media had clearly moved on to other realms. Maybe it was time for me to do so as well. In July I quit cold turkey, just to see how it would feel. Turns out it felt pretty good. A weight lifted. A few weeks stretched into a few months.


Around the time of these changes —roughly mid-summer— my old phone died and I upgraded to a modern smartphone. You can guess where this is going. For the first time in my life I was able to Shazam unknown songs, Mapquest directions, and blast imitation fart sounds in a crowded elevator. More importantly I could finally shoot phone photos of decent quality.

What to do with all these new photos I was taking? For most of them the answer was the same as before: nothing. But a few I began posting to Instagram.

Instagram? Horror of horrors. I've taken my share of potshots at Instagram over the years on this very blog —and I still think it has major flaws as a sharing platform— so it might come as a surprise to learn I've joined. If you'd told me back in January that I'd be posting daily phone pix to Instagram in December I'd have laughed in your face. Never!

I guess the joke's on January me, because I've grown to like it. I look forward to it. I've got to It takes five seconds to share a photo, no need for continuity, and there are many great photographers posting regularly. Best of all IG offers a modicum of online community. There's interaction, personality, stimulation, and engagement. This is the void I'd found missing recently with Penonomen and B. After one week on Instagram my photos generated more reaction than in three years on Tumblr. I feel like I'm part of something, even if it's ephemeral and stupid.

The irony is they're not even good photos, just silly snapshots. My b/w work, which I consider the "real" work, remains mostly in shoeboxes. I suppose I could scan this b/w stuff and put in on Instagram, but that seems counter to the Instagram ethos. It's a phone platform, built for quick sharing and quick looking. Prints be damned. Aside from that, I'm having too much fun making new iPhone photos to bother with scanning.

In fact I've gotten so caught up in phone shooting I'm not even sure what the "real" work is anymore. Maybe I should take these phone photos more seriously. Sure, it might kill them, but who knows. I've never printed any, never looked at one for more than 10 seconds. I feel my entire frame of reference has shifted to accommodate this strange new medium, and I'm still sorting out the ramifications.

If I said "I don't really know what I'm doing anymore" it would mimic the comments of three photographers who've told me the same thing in recent months. All three are great photographers, one widely known. All are talented but adrift, a wonderful condition. Aimlessness is a trait not highly valued in society. In other words, aimlessness is invaluable. Not all who wander are lost. It may be a bumper sticker platitude but with a kernel of truth. So cheer up, photographers and political junkies. Being utterly lost may be a precondition for progress.

The territory may have shifted but as I enter 2018 the way forward remains the same: Observe. Shoot. Repeat. Hopefully the aftermath will amount to something meaningful. In any event it will be prolific, and one year from today, my 49th birthday, more massive still.

For those reading this is 2017, Happy New Year!

For the time travelers, sorry again for the mess we left. 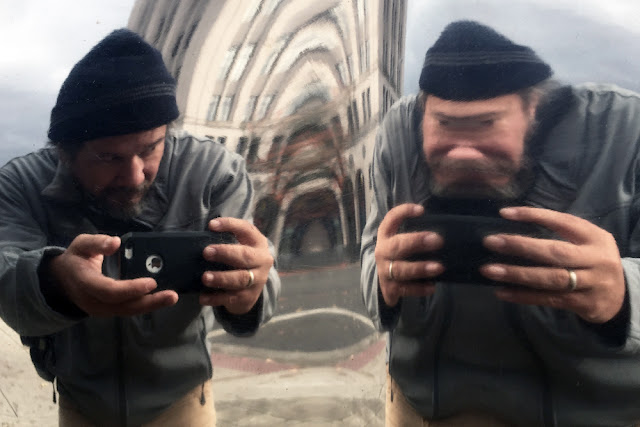 Blake, the horrible present is so horrendous and horrific that it's even horrid. Yes, despite having declined enormously, the horrid is back.

Thank you for the lists, especially because most of what's listed is totally unfamiliar to me. I duckduckwent for the new photobooks and particularly liked the JPEGs I found from Americans Seen. But then I saw the price of the book. Uhhhh.... I once paid a bit more for a complete set of the "10th" edition of Britannica (well over thirty hefty volumes: the ninth plus supplementary volumes); I've never paid remotely near as much for any other book set, let alone book. Hope somebody gave you your copy; me, I'll wait for a cheapo edition for us in the 99%.

Happy birthday Blake, great to be in Eugene for your 49th!

Happy new year, Andrew. I can see what you mean by "minor sense of community, but that had faded as well", but please don't give up posting here on B. I check regularly for new posts, always enjoy what you write (as I'm sure many others do), and have been thrilled by this recent spurt of activity. Anyway, keep doing what you do!

Peter, Americans Seen is expensive if purchased through Nazraeli, but greatly discounted as a membership premium for supporting Blue Sky Gallery. Last I heard they still had some copies left. Details here: http://www.blueskygallery.org/support/join/

I avoided Instagram for the same reasons - to share a low res scan of a darkroom print still seems like blasphemy. Not to mention the hoops you have to jump through to get it on your phone before you can upload it. But for the reasons you mention, I did finally succumb - is there a point to uploading to a place where no one is looking?

Very sorry to hear about you losing your darkroom. As an avid community darkroom user myself, I can feel your sense of loss. I'm glad you've found an alternative though, and hope you grow to like it just as much.

More than anything I hope we start seeing those b/w work prints again in 2018!

Happy new year! a big fan from Portugal. Love your stuff. I use twitter to post some of my photos, I blame can Ted Forbes for this and their photo challenges... cheers!

Mapquest on your phone? Looks like you're the one who has time traveled (from 2004). Happy new year, Blake - looking forward to your 2018 entries here at B.

couldn't have said it better myself. Happy new year!

Really enjoyed this Blake. Happy to see you posting on IG as well, welcome to the future! Looking forward to your work in 2018.

How did you find the communities on IG? Do they have groups or something? All I do is post phone snaps and watch IG video stories.

I still like your blog so please do not give up on it as you can write long rambling articles like this one.
Have a great Year.
Michael

Still checking out B. Still brings me fresh and unknown perspectives on life, through photography. Still enjoying your prints :D

I just realised I called you "Andrew" above. Please accept my shamefaced apologies.