I'm tired of album reviews. From now on this blog is going to focus on old keys. Here's a few that turned up recently under a storage tub in the basement. 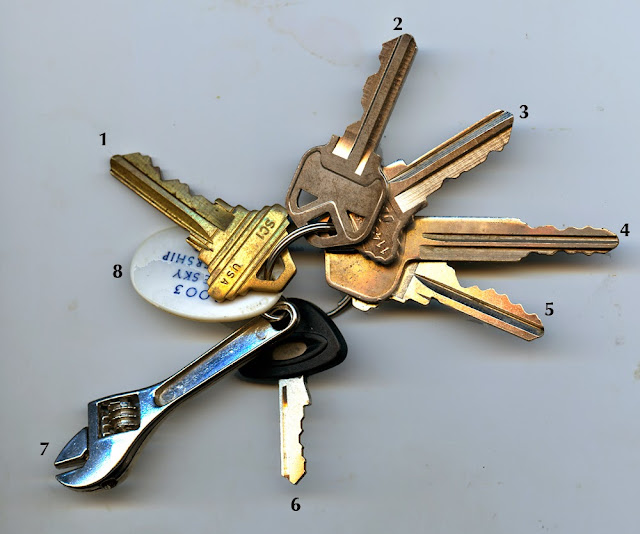 1. Can't remember what this key goes to but it looks like the old kitchen door key from my Taylor Street house in Portland. The gold patina and USA banner lend a patriotic flair, while the letters SCI seem to identify something which might have been important once but has been long since forgotten, raising questions about the essential unreality of the mind.

2. This looks very much like the front door key to my house but I tried it and nope, sorry. The paired triangular windows offsetting a central diamond explore the repetitive practice of seeing and comment on the Amity-like transparency of hyper-securitized culture. Or at least they used to when I knew what this key opened.

3. My best guest is that this is the entrance key to a kayak shop where I worked for a few years in the late 90s. On the river what starts out as contemplation soon becomes corroded into a hegemony of distress, which is fortunately the gateway to artistic creativity. Traces of corrosion on the reverse —unseen (unseeable?)— side of this key foreshadowed my later shift to photography, a transition which proved key for me.

4. Pretty sure this is an extra key to my old Suzuki Sidekick which I owned from roughly 1994-2008. Great car. I wound up driving it into the ground, then selling it on Craigslist for parts. The fact that this is a replica key made at a hardware store comments on traditional notions of originality, authenticity, and copying, while leaving behind a sense of discontinuity and the unlikelihood of a new beginning.

5. No clue what this key unlocked. The transcendent brassy texture hints at a life of performance, while the notched shaft creates an engaging visual environment of line, color, and groove, leaving only a sense of chaos and the chance of a new reality. If memories are carpet lint, the past is a Hoover vacuum on full power, ruthlessly internalizing. Could've been my old garage key maybe?

6. This was a key from an old bike lock long since discarded. I'm guessing it was replaced when I lost the key. Kryptonite has since turned to a more generic —and, it must be noted, phallic— form, the locks of which are harder to pick with bobby pins, and with no key forms available at the local True Value. Ties to consumerist fetishism and midlife subcultures thus stripped, this old key is free to resume a traditional identity.

7. This small wrench attached to my keys served as a physical memento rather than the useful tool its shape presupposes. The neighboring keys convey the diminutive scale, far too small to fit many nuts or screwheads. I found the wavering derivatives too distorted to allow much personal screwing or unscrewing, always a bad sign. Nowadays I keep a more utilitarian tool on my keyring: A bottle opener. It gets plenty of use.

8. Every year Blue Sky Gallery distributes monikered tchotchkes to its members as thank you gifts. The 2003 date on this keyring helps date the entire set of keys to the early millennial era. I probably lost them shortly after that year, and grew very irate as I realized they would all need replaced. I imagine I screamed at the walls as I looked a hundred times in the same drawer. Losing keys sucks. Finding them 12 years later doesn't help. The viewer is left, perhaps jarringly, with an epitaph for the limits of our future.
Posted by Blake Andrews at 9:14 AM

I think they must be the keys that disappeared down the sewer grate in Providence, and found their way back to you -