A recent Facebook posting alerted me to this Flickr page, where in 2004 a woman named Lyza Danger uploaded a photograph of a local supermarket (a Fred Meyer in Portland). 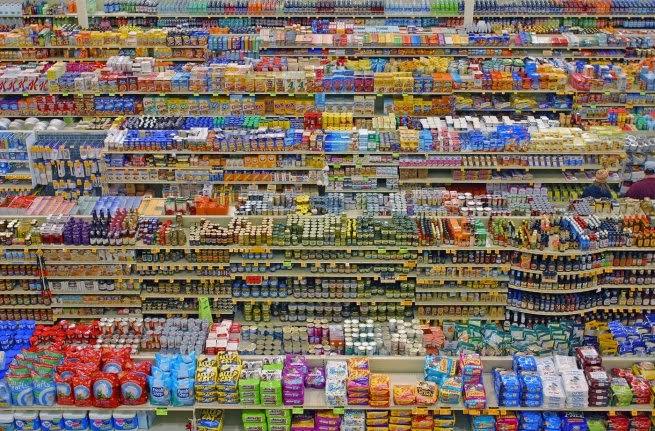 After posting to Flickr, Danger opened up the image rights to Creative Commons, leading to widespread circulation. The image has been copied and reused many times online, sometimes with permission and sometimes without, often in articles about overconsumption and the food industry. Since 2004 it has received 94,000 page views and hundreds of comments.

By her own admission, Danger's photo bears some resemblance to a well known photo by Andreas Gursky. For reference, here is the Gursky photo, 99 Cent II Diptychon (2001). It's a two part photo but often represented by just one half. 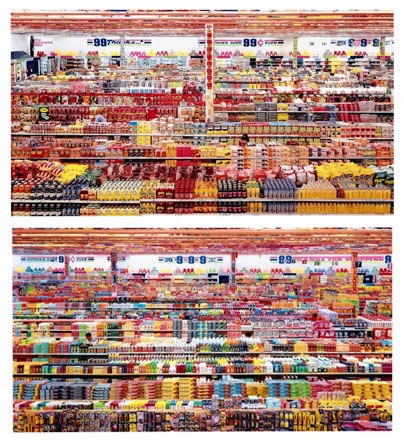 There's a strong similarity but they're obviously separate photos. So far, so good.

But then things get weird. Over the past decade the photos have become confused online and their identities intertwined. The Flickr comments give a flavor. The early ones accuse Danger of copying Gursky's style. Then there's a gradual shift. Recent comments accuse her not only of copying the style of but of applying her name to his photo. "This image IS an Andreas Gursky image," wrote Engelfoto a few days ago (since deleted). "Look him up on Google Images and you will see this exact image..."

The problem is he's right. When you do a reverse Google Search for Danger's image, this is what turns up:

But it gets worse. Gursky's 99 Cent is a very famous photo and has countless online references. But several of them are illustrated with Danger's photo instead of Gursky's. For example, this art photo profile which uses not only Danger's picture but also Gursky's right next to it, as if they were two versions of the same scene. Here's a nice little essay about Gursky's 99 Cent, illustrated with just one photo. But it's the wrong one. Here's a list of the most expensive photos in history, ranked by sale price. I'm guessing they meant to include Gursky's, not Danger's. But it's in another language so it's hard to say for sure. The title of this site is unintentionally ironic. It's called Art Intelligence. The short essay uses a lot of big fancy words. But unfortunately the most important element —the image— is wrong. Here's an extensive PDF about photo history in an unknown Asian language. Shouldn't historians know the right photo? Here's yet another site expressing astonishment at the Gursky sales price. I hear ya. Still, it's the wrong fucking photo. Presumably a site with the word Art in the title would be discerning in their image choice. But no. Not this one. Here's one touching on food distribution. I think they used the right image. Just wish they hadn't captioned it incorrectly by Gursky. Here's a site which answers the question of why 99 Cent  is considered a masterpiece. I'm assuming they meant to use Gursky's photo but they didn't.

OK, I could go on with more examples but you probably get the idea. The two photos have been out there for a decade together online. Gradually their histories have blurred and their DNA has mixed. If you don't have a clear image of Gursky's photo in mind it's easy to mix them up, especially during an online search. In another few decades maybe the blending will be complete. 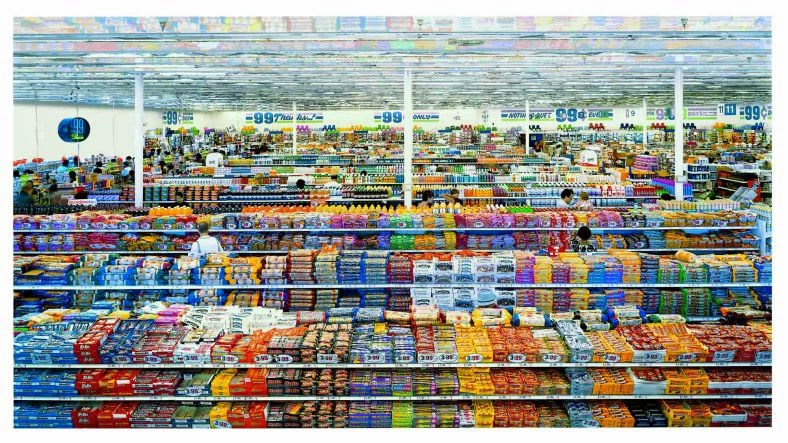 But wait a minute. That's not quite it. Or is it? Upon close examination it's slightly different from the Wikipedia 99 Cent linked above. It's not even the same as half of it. Are there multiple versions floating around? Maybe we should look in a book. 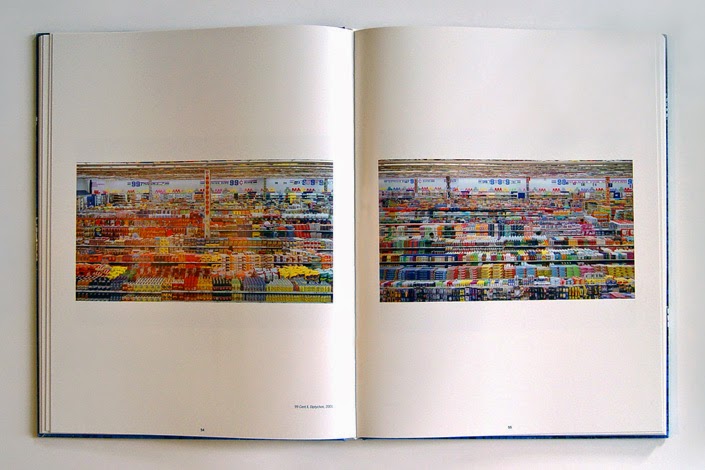 OK. But what about this other book? 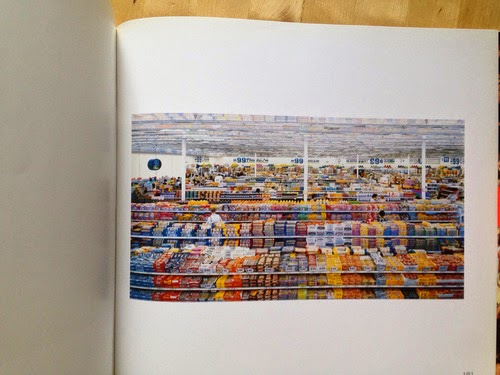 It turns out there are two versions of 99 Cent. Gursky made the first one in 1999 and called it 99 Cent. In 2001 he revisited the image, modified it into a diptych and titled it 99 Cent II Diptichon. This is the one which sold at Sotheby's for $3 Million plus. I'm not sure how much the first one is worth. But they are distinct images.

Maybe you realized all of this, but until recently I'd been plodding along thinking there was just one 99 Cent. And the weird part is I don't even know which one it was. I've even seen the photo on the wall before shown as a massive C-Print at Pier 24 in San Francisco. But which one was it? In my memory it's lodged as something about grocery store racks with bright colors and a deep recessive background but nothing more distinctive. That's sort of what Lyza Danger's photo looks like. Can you blame people for confusing it?

And if Danger's photo has intertwined with Gursky's, the situation with the two Gursky's is even worse. They're inseparable. A search for Gursky 99 Cent II turns up more wrong images than right ones: 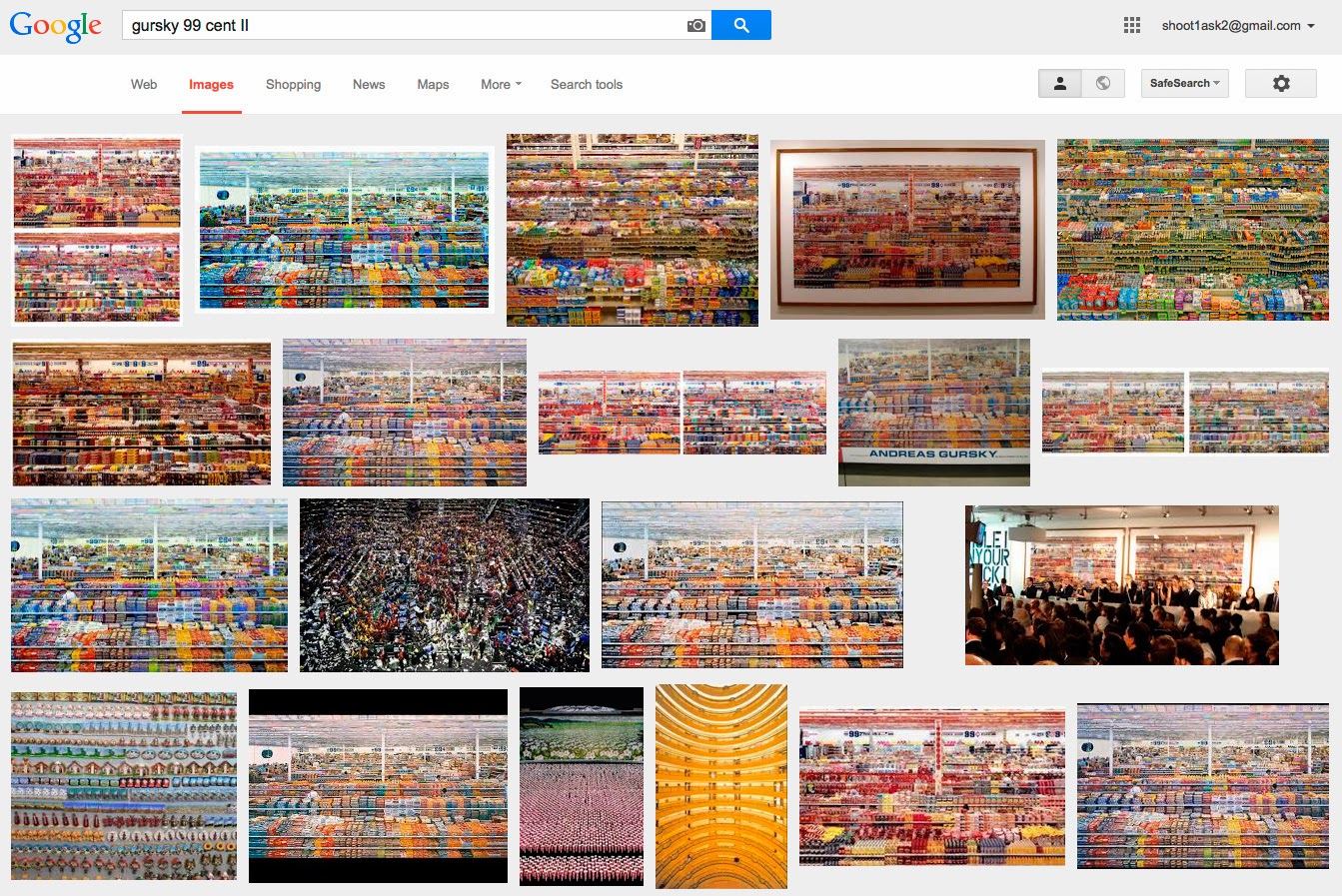 Here's a site that uses both photos, one on top of the other, both under the same caption, with no recognition they might be different. Even the 99 Cent Store history page gets them confused. It's a big fucking mess.

Maybe this was Gursky's intention all along. By creating two very similar images of a generic setting he knew there would be confusion. Perhaps he intended to bring attention to the sheer malleability of the scene. Because although the raw material here depicts a a real place —the 99 Cent store in Hollywood— Gursky's process involves manipulation, blending, and trickery. He could digitally compose just about any scene he wants and call it 99 Cent. Or leave the photo completely unaltered and call it the same. To someone shelling out $3 Million for the photo it's the idea of 99 Cent that matters, not what's in it.

For me this photo behaves like an overplayed song on the radio, Yesterday or Tangled Up In Blue or something I've heard a thousand times. I know the song so well that when it comes on my brain shifts it to the background. I don't listen carefully because I think I know it. But do I?

And with 99 Cent it's the same. Until just this week I'd never looked very closely at it. And judging by Google Search results I'm not alone. Multiple versions have passed unnoticed with blended DNA, names, and visual reference points.

Next time I'm in Hollywood I'm checking out the inside of that store.
Posted by Blake Andrews at 2:39 PM

This is kind of like realizing that there are (at least) 4 versions of Tank Man out there. We all know the image but we've long stopped looking at the details.