Mark Alor Powell: What Was He Thinking?

Mark Alor Powell is a photographer based in Mexico City. 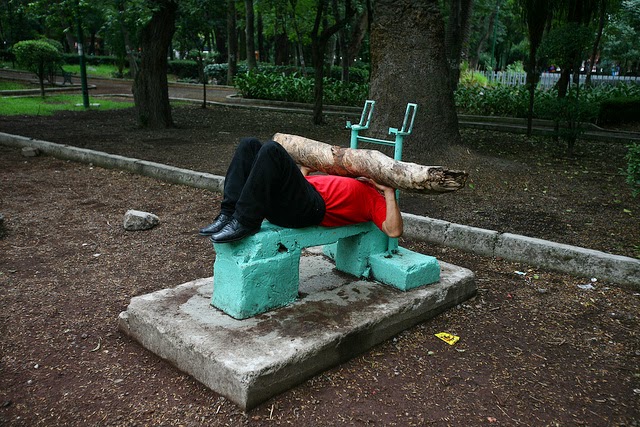 This was taken at the Jardín Ramon Lopez Velarde Park in Mexico City. There are a lot of civic projects from the past to promote exercise. A lot have fallen to the wayside but sometimes you see a determined person making the best of what is available. I saw this guy using a log to do some bench presses and simply waited for his down stroke to shoot (he was aware of my presence, but continued to focus on his exercise). I consciously did not want to see his face in the shot. I talked to him afterwards and he told me he was a male nurse and a physical therapist in a hospital nearby for people recovering from heart surgery. I noticed a few days afterwards passing through the park that this same log was left nearby leaning against a tree for the people to reuse. 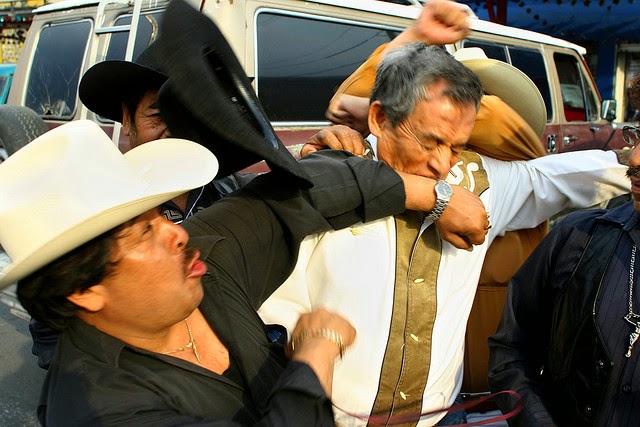 I approached and started to chat with some Norteño musicians in the part of Mexico City known as Iztapalapa. They had been drinking and told me they were waiting for the next round or for some new clients to pick them up for a party. It wasn't real clear, but it seems musicians have their spots, their territories to wait for potential customers —it is almost pimp-like. In any case, another musician walked over and exchanged a few words and there was a shove and I got my camera ready and then a punch which I blindly shot without looking through my viewfinder and shot from my chest. It wasn't until later after I left them that I looked into my camera and saw I got something interesting. 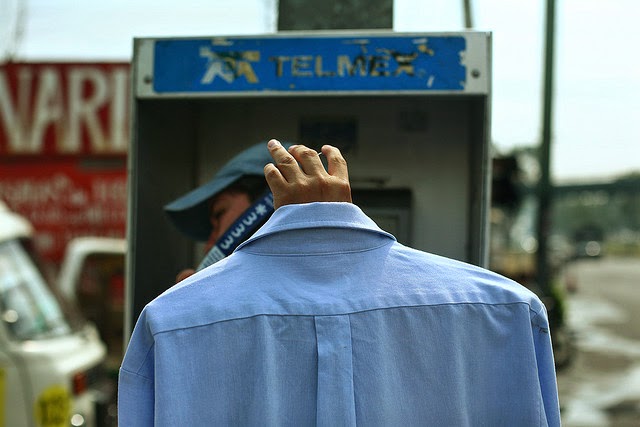 I saw this guy at a pay phone and he had probably just got some dry cleaning done. I simply stooped down a little as he propped his shirt outside the phone box. I have noticed photographing people as they talk on phones is always a vulnerable (advantageous) time. People seem to let you photograph because they have no way to explain it to the person on the other side and prefer not to stop their own conversation. 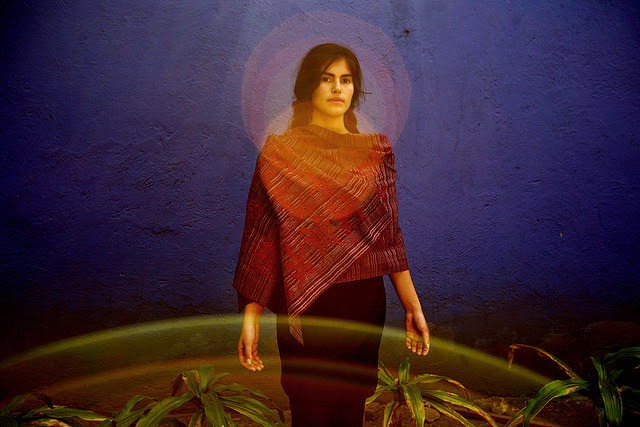 This is an outtake from a fashion shoot I was doing in Mexico City at the Casa Barragan. The model name is Sofia de Lara, famously known for her American Apparel work. I have had the opportunity to photograph her off and on over the years and it is interesting each time. My camera was pointing directly into the sun (underexposing).  It made a great lens flare. Interestingly my client passed this shot for more obvious shots, yet it was my easy favorite on that day of shooting. Often times it is hard to work in fashion because the expectations seem to work against the grain of what you see and want. Though I think it is best to not give in to these expectations and take risks because the photography will always be fresh and better. I have had to learn this lesson many times. 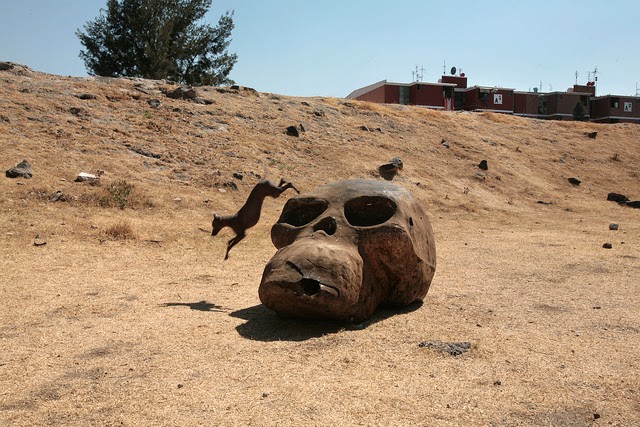 I was hanging out in Iztapalapa, El Faro del Oriente art school and this dog (xoloitzcuintle) was sunning himself in the late morning winter Mexico City sun. There are quite a few sculptures from the previous year Day of the Dead celebration discarded throughout the campus and as I approached the dog to get a shot the dog got nervous and jumped off —I took a quick shot from my chest and turned it into something better than what I expected. 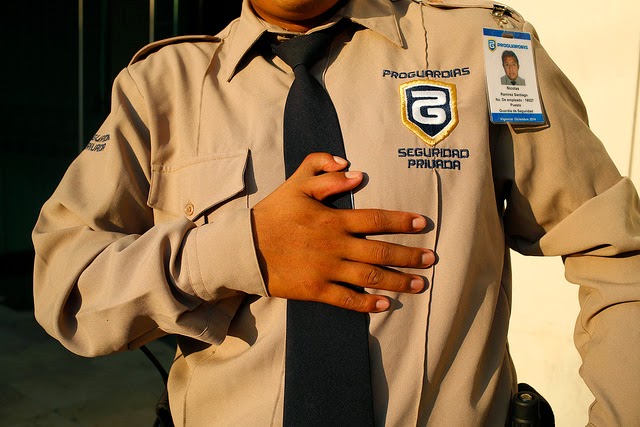 I was in Monterrey, Mexico. This city seems to be on its nerves from the recent narco-drug violence and insecurities within the city limits. I was photographing a scene in front of a civic building and I could tell this security card was getting nervous with my presence. I often wear a camouflage hat (my lucky hat) while I photograph in the street. I thought maybe he thought I was from Los Zetas (a well armed narco faction in Mexico) or something.  He was covering his eyes to shade his eyes from the sun and I approached him to ease his mind and told him I was photographing the traffic signals because they were fascinating and old looking. Then I noticed he had two thumbs. I told him his thumbs were amazing and told him that in some cultures in the past he would be considered a god. Please please let me take a picture. As I told him to stand still and I lifted my camera and he naturally placed his hand on his chest. I took two shots and thanked him profusely and we gave each other a high five/six. 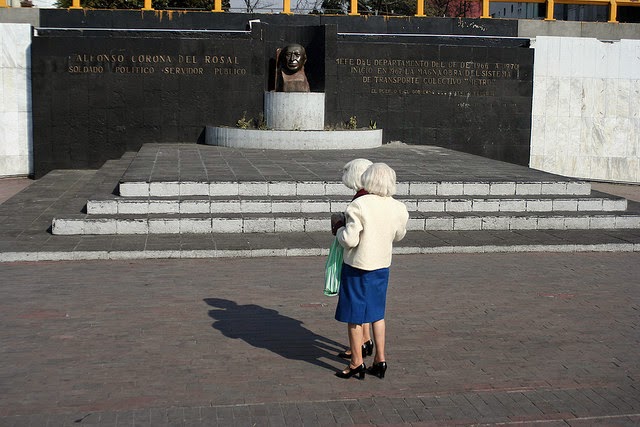 For a long time I would see these twin sister ladies in my neighborhood and I was fascinated with them, but I was always a little hesitant about approaching them to photograph. I didn't want something Kubrick or Arbus like, but really just enjoyed seeing them every time. They always walked together, dressed the same and lived together in an apartment near my apartment in La Juarez. One day I was sitting in the La Glorieta de Insurgentes in La Zona Rosa (where they filmed a scene from Total Recall, the part where Arnold Schwarzenegger meets the robot taxi driver in a chase scene) with my wife and she says to me "Look at them!" I suddenly found myself jumping to my feet following them from behind taking a few shots. I jumped on a cement bench and lifted my camera to my face —at this same moment they paused, I don't know why, to look at the sculpture (it is the bust of the founder of the subway in Mexico City).  It was one of those moments when you feel that the world nerve point is neither here nor there, no cause or effect exists and everything fits together just because. At first I thought the shot was imperfect because I could not see clearly see both twins, but then it really grew on me. 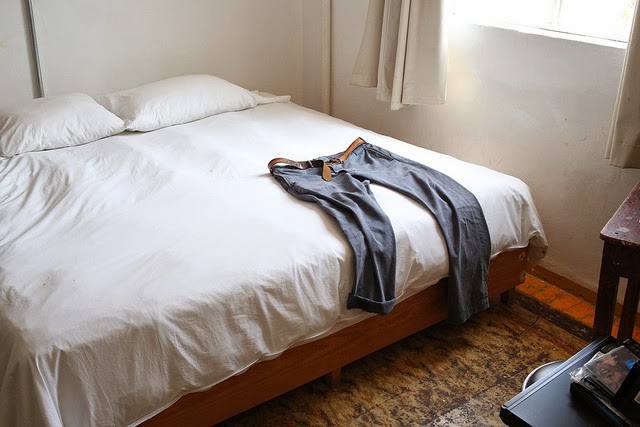 I was on a editorial assignment photographing the artist Francis Alys in Mexico City at his studio in the historic downtown (El Centro).  I am a big fan of his work, so I was excited to meet him and see where he actually works. The writer went to sit Francis down for an interview and I was left free to wander his studio. Before he left, he told me to not photograph any of his art pieces or work in his workshop, but I was free to wander. I actually was not at all interested what he was working on but wanted to see behind the scenes  I started noticed that even his personal and day to day objects were like displays in themselves, mini refections, stills and contemplative scenes —all seemed to have purpose, even the places where dust was not cleaned seemed to be left undusted for a reason.  I thought that there was really no division between what was work and not work in this space. All was in a process of exercise, expression or contemplation. It was like a purposeful creative OCD. I wandered in his bedroom and found his pants on the bed. I took a picture and it felt like I found a little performance. 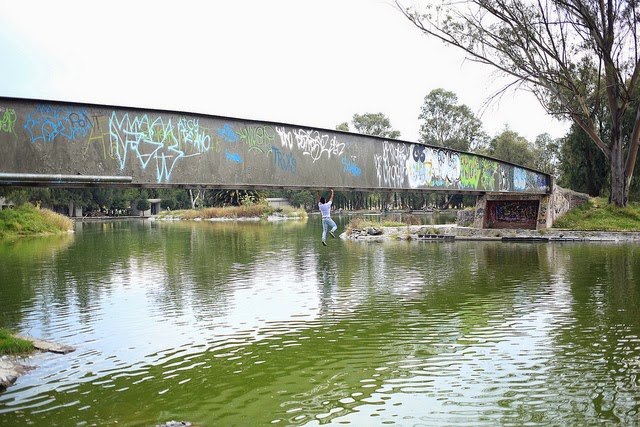 I was photographing in the park in Aragon, Mexico City and there was this area inside the park where an old railroad bridge stretches across a lake full of green algae. I started to hear these slapping sounds and noticed a man crossing the bridge from underneath. After I took a couple photographs, he quickly disappeared in the tree brush on the other side down a narrow path. I asked a hot dog vendor near the bridge if he saw it and he told me that this guy does this several times a week without fanfare, he lives in the neighborhood on the other side of the park and this is probably just a shortcut. The bridge is old and the tiles are broken on top, so this guy just practically crawls underneath.
Posted by Blake Andrews at 10:46 AM

great read! good to find the background of some great images

I follow Mark on Flickr and almost every photo he posts makes me think, "I wish I had taken that."

"It was one of those moments when you feel that the world nerve point is nether here nor there....."