When Alec Soth's state fair rejection letter hit the blog-o-sphere Monday, I started a small pool trying to guess how many times it would be reblogged. My guess -—410 by midweek— proved high. As of now (Thursday morning) it has 201 notes and counting. That's not 410 but still quite a lot. 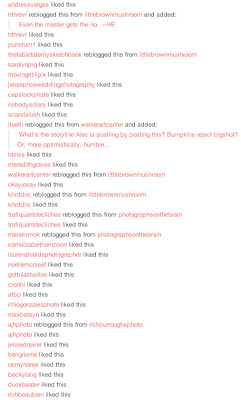 A small selection of notes following Soth's post
Perhaps reblogged is no longer an accurate term. Retumblred would probably be more descriptive. But since Tumblr uses reblog I'll go with that word anyway. The post first appeared on Tumblr, and from there it proceeded to gather likes and reblogs like a hull collecting barnacles, thanks in part to the structure of Tumblr.

Tumblr's interface embodies the very essence of what the internet is now: the one-click response and, more importantly, the exponential leveraging of such responses into meaningful judgements. Every Tumblr note is a personal reaction, yet when taken as a whole they can reveal the wisdom of crowds or at least a sense of what's popular. They become a giant finger pointing at things. Tumblr is probably the best giant finger tool yet invented. When something comes across your desktop with 201 notes it's often worth a look. But you'd better do so quickly because that finger has a very short attention span.

But what happens when the Tumblr mindset migrates to other platforms? Giant fingers have their place but I don't think they're as important as creating original content. But we may be entering a situation where it's just fingers pointing at other fingers. The vast majority of Tumblr links I encounter are not written by the original content generator. They're links, often relinking to other links, so on. Facebook, Twitter, and Instagram have built their empires on this model, and of course Tumblr, all quite successfully. It's a wonderful method for taking the pulse of what's hot but I think it diminishes the role of original content. 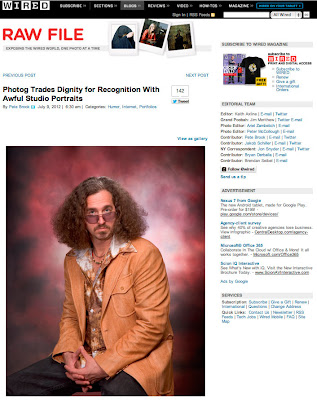 Raw File, 7/9/12
The ease of reblogging over creating has been eroding the blog-o-sphere for a while. Now I think the trend is extending to broader media channels. Look for example at the spate of Gordon Stettinius posts which hit the internet last week. Pete Brook was first to the punch. His Raw File post July 9th nicely profiled Gordon's Mangini Studio Series. It showed a few images. It pulled some quotes. It was a nicely written finger pointing at a fun project. 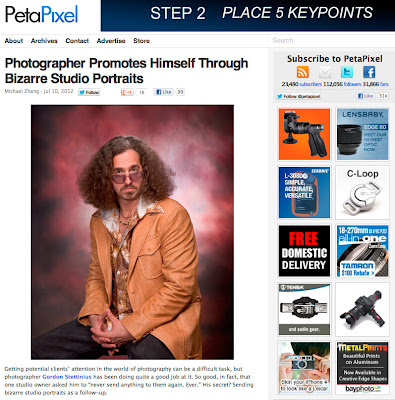 PetaPixel, 7/10/12
Then other fingers started pointing. Brook's article was followed the next day by a PetaPixel post which offered a condensed yet virtually identical profile on Stettinius. The timing was no coincidence. This post was basically a Tumblred version of the Raw File original, the written equivalent of clicking Reblog. 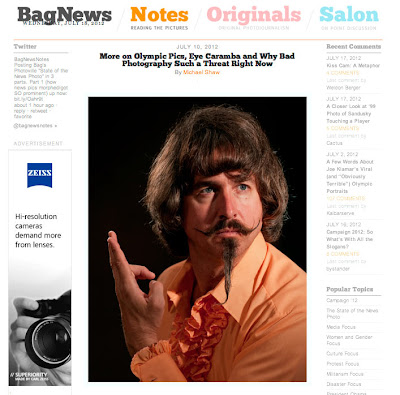 Bag News, 7/10/12
That same day Stettinius' photos cropped up in a Bag News essay about bad photography. Michael Shaw's piece was far more than a simple reblog. Stettinius' photos were only one element in a well-written and quite original post. Still, the timing lent credence to the notion that something was in the air. Another finger. 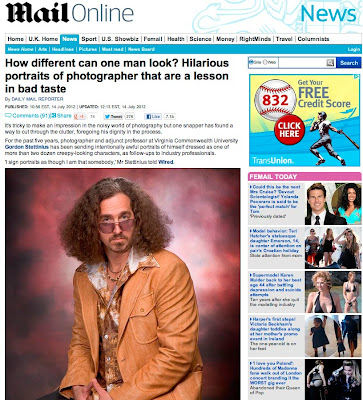 Daily Mail, 7/14/12
The shit really hit the fan a few days later when The Daily Mail jumped into the act. Their July 14th article on Stettinius, written under the psuedonymous byline of "Daily Mail Reporter", copied liberally from the original Raw File article.

Described by Stettinius as “a prank run amok,” the Mangini Studio Series grew out of Brown and Stettinius’ shared nostalgia for the studio session.

“We are content for the image quality to be more like that of a promotional glossy from a generic portrait studio than as a fine art print,” says Stettinius, “The cheesiness quotient is pretty high.”

'We are content for the image quality to be more like that of a promotional glossy from a generic portrait studio than as a fine art print,' Mr Stettinius said, describing the series as 'a prank run amok'.

'The cheesiness quotient is pretty high.'

“I can only grow my hair so fast, so patience is a requisite,” says Stettinius, “Terry and I can only get together every couple of months.”

On occasion, his unorthodox promotion backfires. “My looks change somewhat and thank-yous have sometimes been met with confusion,” says Stettinius. “One L.A. gallery asked me to never send anything to them again. Ever. I might send a follow-up.”

'My looks change somewhat and thank-yous have sometimes been met with confusion,' Mr Stettinius said. 'One Los Angeles gallery asked me to never send anything to them again. Ever. I might send a follow-up.'
The two men meet in Mr Brown's studio every couple of month to try out a new persona.

I could give more examples but I think the point is clear. The Daily Mail did no original reporting of its own. Instead their plagiaristic article was the written equivalent of a Reblog. 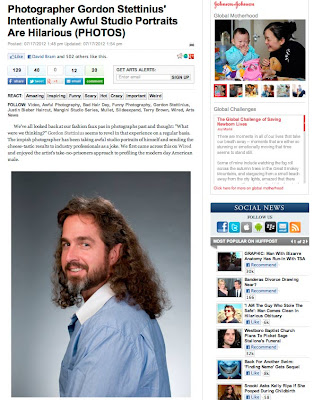 The Huffington Post, 7/17/12
Perhaps it was the widespread visibility of The Daily Mail article which pricked the attention of The Huffington Post. The giant media aggregator ran a Stettinius post a few days later on July 17th. Although the essay carried no byline it did appear to have an actual person behind it. Even if it didn't offer much new information it was in part an original creation. The Huffington Post article has 775 Likes (to date). It's the biggest finger yet pointing at Stettinius.

The timing of all this seems peculiar and rather lemminglike. I love Stettinius's portrait series, but like many photo projects I don't think it's particularly time-sensitive. He's been working on it for a while and the end is still a few years off. Every few months he posts a new image on Facebook, and these have been fun to follow. It's a series in progress. The Raw File profile could've come now or a year from now, or last year (when in fact Pete Brook first pitched the idea unsuccessfully to Wired).

In the traditional blog-o-sphere the exact timing wouldn't matter much. But in the age of reblogging, timing matters a great deal. The giant finger has a short attention span. So we have the Raw File article quickly followed by a succession of follow up articles, each written in the breathless tone of a timely news feature. Like, this is happening now. Even if it's been happening for a few years.

Near the beginning of his Mangini Studio series in 2010 Gordon sent me an early photo, a mock-political portrait signed by the candidate Godfrey Damon Wright, and accompanied by a hilarious mea culpa-filled letter. You can read the actual text here and I highly recommend it. I think the letter is even funnier than the picture. I'd vote for him in a heartbeat, but alas he's no longer running. 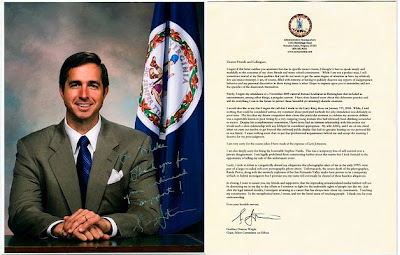 Gordon Stettinius as Godfrey Damon Wright
Unfortunately none of the recent articles on Stettinius showed the letters. Some of them mistook Terry Brown (a woman) for a man. And according to Gordon the implication in some of the articles that he sends these pictures to clients as PR is a misconstrual. These are simple facts that might've been easily discovered had the articles been built on an original content model instead of the reblog model.

OK, so big deal. Articles are written. They gather notes and reblogs. Fingers can be helpful. What's the problem? For me the problem occurs when linking begins to crowd out content or, worse, is mistaken for content. And because the web is always hungry for the latest buzz, this "content" can convey a false sense of what is actually news and what isn't.

A few weeks ago This American Life ran a story on ghost writers in the Philippines (Photographers may want to hear the opening feature on Cindy Sherman, but that's another story). American journalism conglomerates had outsourced local news articles to cheap labor overseas. For me this dovetails with the reblogging trend. To the conglomerates the original content of the articles wasn't viewed as important. It could be outsourced or reblogged or pulled off the web. Whatever. What mattered more was spinning that content. Leveraging it.

In this case journalists were actually outsourcing their local civic duty. The world of photo commentary isn't nearly as important, but I see it heading down the same path. So maybe I'm in the wrong business. Or at least the wrong platform. Blogspot is not as reblog friendly as Tumblr.

Reblogging and linking is fine, but once in a while someone has to get off their ass and write something new. And I'm not talking about some subcontractor in the Philippines. I'm talking about you. Now. Reading this. Sometimes you need to give the finger the finger. 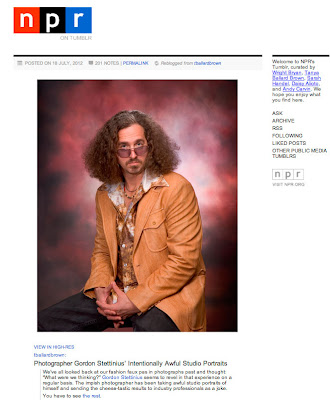 Yesterday as I was writing this post the Stettinius series appeared on NPR's Tumblr. Same photo. Same dropquote. It's got 201 notes so far. I'm betting it gets 410 by next week.
Posted by Blake Andrews at 9:05 AM

Anyone have a link to view the Soth rejected image???