I've been taking photography lessons this week from Tab's father Adrian. Not with a camera but an excavator, which he wields with the delicacy of a scalpel.

Some years ago he bought a small mountain in upstate Maine. He's been tinkering around on it since then, developing roads and houses. Each year the effort becomes a bit more eccentric.

This summer he's been focused on a steep bank on the mountain's shoulder. He's cleared about 10 acres, flattened them into a wide mound, and built an immense stone palace facing the road composed of huge boulders found around the property. They're carefully layered into two berms encircling a flat area about one acre in size. At its peak the wall is about 60 feet high and rises in two tiers with a grassy bank between the levels. A staircase of flat rocks runs up the center. It looks like a cross between an Aztec temple and a Roman amphitheater plopped into the Maine woods. 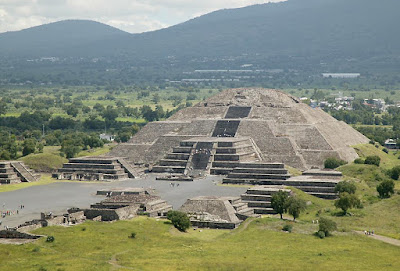 Pyramid of the Moon, Teotihuacan, by Richard Seaman
Why is he building this? No one knows. It's not religious. It serves no purpose. Few people have seen it. It's completely original and unconnected to any societal function.

If the Maine temple has any explanation it's that Adrian likes to build with rocks —is compelled to build with them— and he has the time and money to make whatever he feels like. He is completely tuned to his muse, with no outside interference. The closest analogy I can think of is something like Watts Towers or Coral Castle or maybe Richard Dreyfuss building Devil's Tower models in Close Encounters.

I think the lesson for photographers is clear enough. Put the blinders on. Focus on your temple.
Posted by Blake Andrews at 5:46 AM

Can't figure out how it looks but could be a nice set-up for a temporary photo gallery ... if your father-in-law is OK.

It would actually be picture perfect for a truck ad. And yes there's a road to the top.

Sounds like a wonderful obsession; reminiscent of a folly.

An architect friend Oscar Palacios told me many years ago that only the so inspired can build with rock. One reason is because it is so heavy to begin with. It's not like Sunday painting, when you casually flick around a brush or two.

Blake, how about a pic of Adrian's Walls? Is it at all like Hadrian's Wall?

Roden Crater sounds interesting but I don't think Turrell is operating with blinders on. More like with one eye on the art world. Anyway I got a fairly close look at it using Google Earth and it's definitely intriguing.

I will post some pics of the wall after I return to Oregon. My Maine computer set-up is a bit lacking.

Hey Blake,
You should check out the Palais ideal,
similar thing with rocks but not on a mountain... http://www.facteurcheval.com/