Thinking through the box 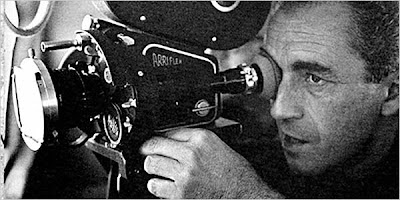 Years ago one of the first photoblogs I began reading regularly was Doug Plummer's Dispatches. In the past few months, Plummer has shifted from photography to videography (for the purpose of this post, I'm going to call all recorded moving images videography, including film), occasionally posting clips on his blog and more often detailing the trials and trevails of learning a new craft as a novice. It's been interesting peeking over his shoulder.

On their face, videography and photography seem similar. You look through a box and record what's out there. Some of the same visual skills are applicable to each craft, which is why there are many people like Doug Plummer who do both, and why the history of photography is littered with people who crossed over into film. Cartier-Bresson gave up photography for film for a few years, as did Strand and Frank. My friends Bobby and Chris have experimented with both. The two arts seem malleable and similar enough to promote a lot of crossover. Certainly pop culture associates them as interchangeables.

Speaking personally, I just don't get it. I am in love with photography and yet I feel nothing for videography. I could never cross over. Creating moving images seems completely boring and dead to me. I'm not sure why this is. Every time I read about someone like Plummer switching gears it brings up the same questions. I ask myself if the two crafts are really so different, and if not, why don't I have any interest in videography?

I think part of it is due to my love for the moment. The photographs I love best are about synchronicity and irreplaceability. They exist for a split second and are gone, and perhaps occasionally they are captured. There is something very essential, zenlike, and poetic in their nature which is NOT in the nature of any video because by nature a video captures more than one moment.

The other hangup I have about videography is that it generally attempts to record reality. Watching video footage, it is generally pretty clear what was happening in front of the camera. This is true for documentary or pure footage of the sort Plummer is pursuing, but even when actors are used or clips are manipulated in post-production, it is generally possible to interpret the reality of the original scene. With photography, this is not always possible or desirable. By nature a photograph contains less information than video footage. By withholding that information a photo can be subtle, mysterious, and confusing in delightful ways. It can tell you nothing about the original scene and for me that's great. I think this is why I have a hard time appreciating photojournalism or other photography that attempts to tell a story. To paraphrase Winogrand (who I can almost guarantee had no interest in videography), it's about the photograph, not about what was photographed.

That may not make sense but it's the best way I know how to explain it. So reading Dispatches lately has held some of the watch-between-the-fingers sensibility of a horror film. Why is he...No, Don't go in that room! Doesn't he know what's in there? And alone?! I watch with fascination as he plunges eagerly into what to me seems clearly to be a dead zone.

I'm sure others will disagree. Let's hear some counter arguments.
Posted by Blake Andrews at 5:13 PM

Yeah, photography shows everything without telling anything, which is lovely. Hard to replicate with video (although I'm tempted often, and I've done some). Now flickr also hosts video up to 90s, so this was a very well timed post.

To put one of the differences between the two media in sharp foucus (ha ha) I heard a fascinating comment by William Klein in a documentry about him (and others): He said (and I paraphrase very loosely):

A great photographer may have a archive of 250 great images. An average photo may be shot in say 1/125 th of a second. That means that the entire archive adds up to 2 seconds of real life.

I never thought of it that way!

I know what you mean. Photography is more distilled. It has a unique power in that it seems to show everything but at the same time shows nothing. Video explains itself over and over, while a good photograph can shout or murmur mysteriously without giving itself away. Each viewer might also hear a slightly different song depending on what they bring to the table, in essense, participating in a way not unlike the photographer when the image was created.

Having said that...Lately I've seen some shit in a very videographic way - a figure moving through a landscape, patterns of hail running through rivulets, a burst of human energy and motion followed by calm.

Some of these little moments strike me in a way very similar to noticing something photographically, a little window opens, something comes together, there is a beginning, an end.