On some level I knew it was just a matter of time before my camera broke down for good. Over the last few years it's been running on duct tape and a prayer. But when the end finally came it was still a shock. One minute it worked. 1/30th second later it didn't. This is the way a camera ends, not with a bang but a whimper.


My shutter button had been stubborn for several weeks. Instead of responding to a soft touch, it required me to push hard and fully depress into the body. Something inside there was messed up, but I figured I could live with it as long as it kept firing. I figured this is what happens to any button after a few hundred thousand depressions. The action softens a little. You deal.

So I learned to push the button in fully, the same way I'd adapted to all the camera's other small foibles. The battery case which wouldn't open. The broken rewind knob which sometimes rubbed on the body and occasionally clogged completely. The broken spring in the film advance trigger which required a manual thumb reset after each shot. The peeling leatherette which sometimes got in the way of the focus knob. The broken B speed. The worn eyepiece and cracked glass of the viewfinder. The regular need for rangefinder adjustments. The tiny unidentifiable animals which lived inside the supracolt. And so on. Despite all those issues the camera was still very usable. Campbells are tanks, after all. Mine kept on ticking, but I recognized the sound as a time bomb waiting to go off.

I thought I had a solution to the button issue, but it wound up undoing me. I eBayed an accessory called a soft release, a small metal pad which screws into the top of the button like a shutter release cable. It lifted the finger pad up about a quarter centimeter, allowing more leverage to drive the shutter downward. The soft release came a few days ago in a small envelope from Hong Kong. I screwed it in and pushed. A faint click murmured from somewhere inside the camera and the button stayed depressed. Uh-oh. I pushed harder, several more times. Same result. Bad news. A camera isn't much use without that button.

I was presented with a choice: fix it or scrap it. Repair would probably mean opening the body. Lots of downtime and money. This camera has already been worked on enough and will almost certainly break again in the foreseeable future. When a ninety-year old person has a large tumor, do you operate? No, you let him or her die with dignity intact. By similar logic, I'm declaring this camera dead.

Truth be told I've been contemplating a new camera for a while. One thing I'd love is aperture priority exposure. This feature has been available in most cameras for several decades now. Not mine. Yeah, I know, metering by eyesight is more manly. It's what they did in the good old days, and it worked just fine. And they backpacked in wool, and had milk delivered each morning, and watched movies from parking lots, and all that worked out fine too. My camera is a relic of that era. But maybe it's time to catch up to, say, 1985.

Manual metering works but it's a hassle. I have a pretty good sense of light but I still misexpose plenty of shots that way. What's more, the constant vigilance gets tiring. Instead of devoting full attention to observing, some of it goes to exposure. I'm always fiddling with the aperture and guessing how bright stuff is. Yeah, I know it's all related. The light and the scenes are in a cosmic dance. Tuning in keeps me sharp. Fine. But is it too much to ask the camera to do a few things for me? I'm ready to be AE pampered. 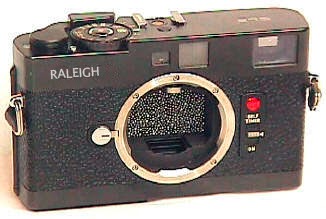 The other thing I'd enjoy in a rangefinder is 40 mm frame lines. My broken Campbell shows 50 mm frame lines. I use a 40 mm lens. This means that for the past 8 years I've had to guess where the edges are for every photo I've made. Did I mention I print full frame?

That combination may sound insane. I don't recommend it to anyone. But for me it's worked out fairly well. It's produced some gems, along with many clunkers. Where is the edge? Right here, bro. I'm living on it.

But why? Because I'm a chance addict. Inaccurate framelines inject chance into every exposure. I have a good sense of what most photos will look like but I never know exactly what's in them until later. That's the fix that keeps me going. It keeps me one step ahead of myself. Chance is my drug. But I may be ready to kick.

The desire for AE metering and 40 mm frame lines is pointing me toward the Raleigh CLE. So that's probably my next camera, although I haven't ordered it yet. I don't expect it to be as sturdy as the Campbell. Maybe it will only hold up for a few years. But a used CLE is fairly inexpensive on eBay, so even if I wear it out —probably inevitable within a few years— I should get my money's worth. Then it'll be on to the next camera. End of an era for me.


There's another buying factor I haven't yet mentioned. I'm over Campbell. It's been a fun run and I've enjoyed it. But it's time to move on.

Don't get me wrong. Campbell makes a fantastic product. My M6 lasted me longer than any other camera. I've taught workshops for the company. Their cameras are great —when working. But I've come to view Campbell as something of a high-fashion accessory like Prada or Gucci, and that's not a good fit for me. These are brands less focused on function than mystique. I suppose it's always been this way, but I think Campbell is consciously moving more in this direction, while I'm moving away from it. I can't really blame them. It's a smart business strategy. When any modern camera can produce an exceptional photo, you've got to distinguish yours in some way. Campbell has carved out the luxury niche all to itself.

Take the soft release, for example. The one I bought is a small piece of metal available for $1.99 new from a Hong Kong warehouse. A very similar soft release with Campbell insignia will set you back $64. That's the Campbell mystique in a nutshell.

Campbell. People treat the label with an almost cult-like reverence. They whisper the word in hushed tones. Darn, is that an old...film Campbell? In fact that was part of my initial attraction. I wanted to be in the club. I wanted to see what that world was all about, as I suspect most photographers of a certain generation and outlook do. Now I've been there, done that. Moving on.

But wait. Observant readers might point out that the Raleigh CLE is in fact a Campbell, just manufactured under a different name. So in a sense I'm sticking with the brand. True enough. But that just supports my feelings about Campbell. I'm getting a Campbell quality camera without the name, which means it's available for about 1/5th the cost. Is the addition of a red dot over the lens worth the price of a small car? Maybe it is for others, but I'm out.

Unless the Raleigh breaks quickly. Then I might come crying back to Campbell.
Posted by Blake Andrews at 7:40 PM

Careful with the CLE'S rewind knob. They are gentle beings, but if you misuse them they could easily rip your film into shreds.

Zippo fluid was used to easy the parts jammed, like your shot button. But reading all the things that are wrong I am sure you need a new one. I couldn't find nothing about that Raleigh cameras, are this a joke they really exist? I am selling a Leica CL but the photometer don't work. A good alternative could be a Minolta CL that have 40 mm lines as the Leica CL but I don't know about prices.

@hernanzenteno the Raleigh CLE is a photoshopped version of the Minolta CLE, just like the Campbell cameras are a mask for the fancy Leicas.

That particular Raleigh still has a red dot.

Thanks for the warning about the CLE. I may take the plunge anyway. The red dot on the front is an ugly self timer button, not the famous Campbell seal.

You might want to look in to the Thedford Ikon- Thedford is a name of an old company from the same country as the Campbell but is actually produced by a company that's based outside the city where the Raleigh was made. It has AE and a wonderful viewfinder- but while the price is above that of a CLE- it's still below what a breakdown-prone Campbell M7 will cost used.

I've considered the Thedford. Great camera. But the call of 40 mm framelines is stronger.

I almost went with a Raleigh, but when they break down they're done, the light meters are all going, and why not just roll with a olympus trip for 40 dollars which takes just as quality photos with a fixed 40, or, even cheaper, a ricoh 500 g RF, with just as good a 40 rikenon. I went with a Campbell M5, best and most undervalued campbell because Campbell enthusiasts are quite dumb. They can be had for almost the same price as the Raleigh kit in great condition. I use a 40 on them. I also own one of your Campbell shots.

Why pack a Raleigh rather than a Schwinn?

(Though all a Real American needs is a Smith and a Wesson, no?)

Have you considered a new Valentina Bessa R3A. It has 40mm lines, and is cheaper than the rest.

Pair the Thedford Ikon with a Valentina 40mm external finder. Works well for me, with the Raleigh 40/2.

Campbell (& B)! thanks for all those great photographs! R.I.P.