If you're the type of photographer who, like me, sometimes enjoys shooting strangers for fun, Nightcrawler will give you plenty to think about. It's been out for a while but movies take a while to enter my world, so I only saw it last week.

The protagonist —Jake Gyllenhaal's Lou— is a videographer, not a still shooter, but the moral territory is similar. One night he films an accident scene on a whim. Lou soon gets hooked. He gets a police scanner, a fancy getaway car, and an assistant. Police scenes consume his life. After cutting his teeth on the chintzy daily dramedy of local news, he progresses to the hard stuff: murder scenes and car crashes, eventually pushing the ethical envelope well beyond any reasonable level of sensitivity. Perhaps inevitably he begins to stage his own situations. Through it all the focus is the same: to process the calamity of daily existence into documentary material, and hopefully sell it to the highest bidder. Is it art? Reality? Cruel? Harmless? Where are the boundaries? Familiar questions for any street shooter.

Through it all Lou is impassive, manipulative, and creepier than Marilyn Manson at McDonald's Playland. Not only does he relish the pain of others, he has no qualms about monetizing it. The obvious comparison to the real world would be downright depressing if the film weren't produced with such a light touch. Director Dan Gilroy's satirical approach is so over-the-top it's safely absurd. It's the type of black humor exhibited in the worst of Spike TV or YouTube, and also in the very best street photography. Anyone who's gone out and preyed on the sheer weirdness of humanity, perhaps hoping for an accident or odd-looking person to wander along, will relate. So will fans of Arbus, Winogrand, Mermelstein, and Metinides. 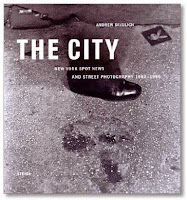 Which brings me to Andrew Savulich's The City. I wrote briefly about its predecessor a few weeks ago. At the time the schedule of the new edition was uncertain. But Jason Shiloh Moore brought the book to a photo meeting this week, where I learned that not only was it real, it was fantastic. The next day I went out and bought my own copy.

The City contains selections from Savulich's spot news reporting for the New York Daily News in the 80s and 90s. It's about twice the size of his first book, with maybe three times the number of photographs. Despite the changes my earlier description is still accurate: "A modern day Weegee, with a more absurd contemporary sensibility." These are the type of photographs Weegee would make if he were pitching Tosh 2.0.

Like Weegee, and like Lou from Nightcrawler, Savulich used a police scanner to find promising accidents, then descended quickly on the carnage with cameras blazing. Most are night scenes bombarded with flash. Fires, arrests, accidents, odd situations, corpses, etc. Anyone who has photographed a salacious event knows how chaotic, messy, and ephemeral they can be. But time after time Savulich ventured into these scenes and fucking nailed it. He was a working pro. If it bled, it led. And if the bleeding was hilarious, it's in the book.

Like many street photographers, Savulich's moral compass was very faint. The whole world was fair game, the less dignified the situation the better. Some of the resulting photographs make me squirm in my seat. They're downright predatory, the cheap equivalent of laughing at the guy who slipped on the banana peel. But if I'm honest, that's what makes them work. Reality is crazy, and these photos document that fact with considerable skill.

The City's other saving grace is its gallows humor. Like Nightcrawler, Savulich's photography assumes a distant, satirical stance bordering on the absurd. Each photo has a handwritten caption composed in simple deadpan tone. The photos and words play off each other to create a sharp commentary on tabloid culture. Celebrities remain anonymous. Life contains unmarked curves. Death awaits everyone. Ha! If you think Kafka or Bruno Schulz is funny, you'll love Savulich. He's a prankster in the finest existentialist tradition, and The City is not meant to be taken too seriously. I think it's that quality which helps make it the best street photography monograph I've seen in a while.
Posted by Blake Andrews at 12:43 PM

He's been one of the best for quite some time....