You can't jump in the same desktop twice

I'm often so wrapped up in mass culture that it's good to disengage once in a while. During our roadtrip to Vancouver I was without computer or TV for about 5 days. No laptop, smartphone, or any other screens, just a good old fashioned optical viewfinder to mediate reality. It was a true pleasure and I recommend the experience to anyone.

Of course there were disadvantages too. When I returned last night I found my kids had been playing on my computer and rearranged the desktop to a horribly camoflouged mountain scene. 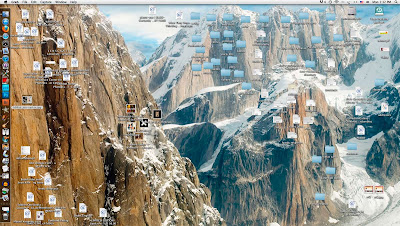 Darn meddlers, I couldn't find anything. But on the plus side at least they hadn't relabeled all the files with nonsense names, a periodic habit on Tab's computer which is downstairs and more accessible. I changed the desktop back to what I like, a blank background I don't have to think about. 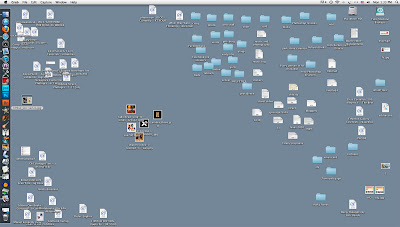 Looking at this screen for the first time in nearly a week, I noticed today how I'd divided it up unconsciously. It was just like a river, with eddies and currents and flow.

This red oval is the active area where I keep temporary files or ones undergoing editing. 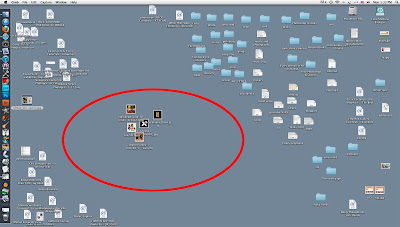 It's a handy spot to drag and drop web images or URLs, for example the album covers now sitting there. In five minutes they'll be loaded into iTunes, then trashed. If the desktop were a river, this would be the fast moving center. Constantly changing and recharging, different from one moment to the next.

I can judge how active a project is by how close it is to the fast current. Things which require my immediate attention are near the active area. For example, this is where I put various Calls for Entry with impending deadlines. 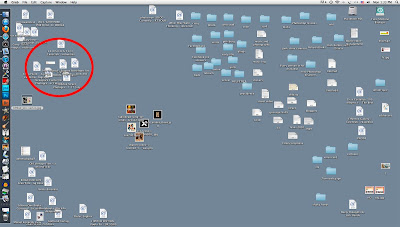 I usually keep them here in this section until I've thought about them so long that it's too late to enter, then they go in the trash. But at least in theory this is a very active section. At any moment I could leap right into that fast current, if I chose to.

By contrast, this section way off in the right corner is stuff I never deal with. 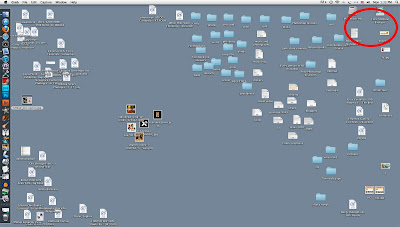 My hard drive icon, Time Machine, an old Blurb Color Management document. This is the deep eddy behind the sandbar which just collects stuff forever.

At top center, safely away from any strong currents, are longterm photo projects, work projects, and web projects. They don't take up much space but nonetheless the folders are cavernous. And boring. No need to go there right now. 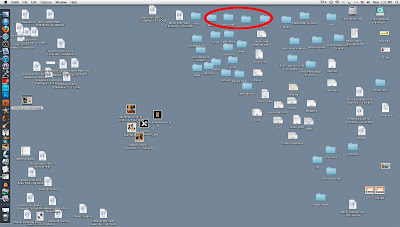 Here's where I keep folders for blog posts in various stages of completion. 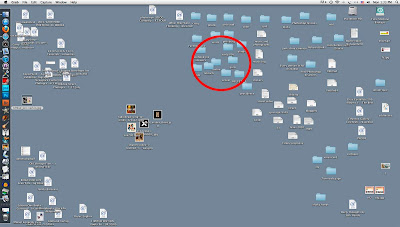 And over here are the blog ideas without folders, just written thoughts in text files. 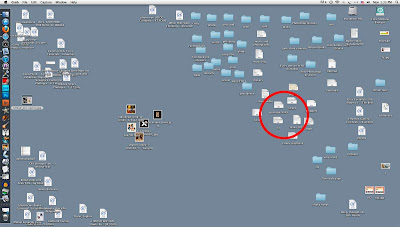 I like to think of these areas as active since they're close to the main flow, but sometimes it feels as if they're stuck in an eddy. Don't ask me how last year's taxes got in there.

Over here are URLs by photographers who've caught my eye recently. 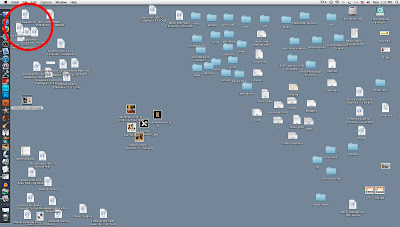 When I see someone I like, I drag the URL into the upper left corner. Or should I call it deep left field? I should probably investigate these further at some point. It's on my list.

Books I've been putting off ordering: 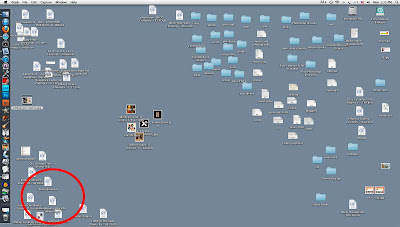 This may be a slow moving part of the river but it's by no means an eddy. The annual Holiday gift-giving flood usually clears this stuff out.

I won't detail the entire desktop. You can look around and see for yourself what's there. But you know, the more I look it the more it looks like a morass of still puddles. Is the current even moving? Have the ideas oxbowed? Maybe I need a great flood to come along and stir things up. 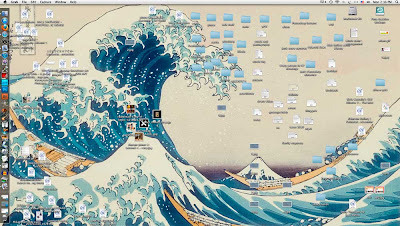 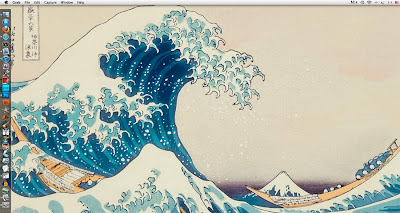 Posted by Blake Andrews at 1:24 PM

Hopefully there was no nuclear plant on your desktop.

Fantastic post!
I'm so tempted to do the same thing that i occasionally do, and then never see anything again. There are still in there somewhere but god knows where.

Awesome post Blake. It reminds me of an ongoing Tumblr project by Nate Larson. Here's the link - http://artistdesktops.tumblr.com/

I see a blurb shortcut on there. So uh, how you uh, how you comin' on that novel you're working on? Huh? Gotta a big, uh, big stack of papers there? Gotta, gotta nice little story you're working on there? Your big novel you've been working on for 3 years? Huh? Gotta, gotta compelling protagonist? Yeah? Gotta obstacle for him to overcome? Huh? Gotta story brewing there? Working on, working on that for quite some time? Huh? Yea, talking about that 3 years ago. Been working on that the whole time? Nice little narrative? Beginning, middle, and end? Some friends become enemies, some enemies become friends? At the end your main character is richer from the experience? Yeah? Yeah? No, no, you deserve some time off.

@Anonymous, you have a very novel approach.