A brief field guide to drugs and photography

"Drugs can’t be reduced to some mystical way to open a perception of reality. I value the hardest and most physical drugs, which alter and intensify the confrontation to reality. Not the ones which allow you to escape to some fuzzy, comfortable or exotic state of mind... Drugs help me to feel, with my nerves and my stomach, where real life takes place. I don’t know what real life is but I can’t bear feeling anesthetised any more."

This quote is from an interview (discovered via LPV) I read recently which made me wonder about the dynamics of shooting while high. D'Agata doesn't specify exactly what drugs he used to aid his photography, only that they were "hardcore synthetics". If such tools are appropriate for shooting scenes of rage, sex, and fear, what drugs might work best for other genres of photography?

Although I've never had any luck shooting under the influence, I have had experiences with various drugs, and of course with photography. What follows is a speculative analysis based on personal experience, conjecture, and irreverence.

Not only must street photographers have quick reactions and laser focus, but a slightly skittish, scatterbrained outlook is helpful as well. Too focused and you wind up shooting stock crap. An open mind allows accidents, which are the lifeblood of street photos. Most important is a sense of optimism, since it's impossible to persevere if you don't know in your heart that you'll find the shot. For all these reasons the natural drug choice is cocaine. Fast, focused, upbeat, urban, and accident prone. 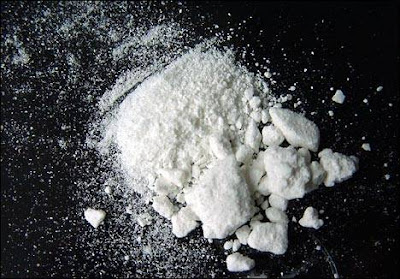 Cocaine has a high street value
Before it was societally demonized, cut with speed, and adopted by early morning rave culture, MDMA (ecstasy) was a very useful drug, applied with promising effect in psychotherapy and counseling. MDMA fosters feelings of intimacy, empathy, and (drug-induced) love, which makes it the perfect drug for wedding photographers to get in the right mood.

I've always wondered about war photographers. How do those people maintain their composure in the midst of such psychologically damaging scenes? It seems one must have nerves of steel, or else be completely desensitized. If it's the latter, what better drug than morphine to aid the situation? Once the warm feeling comes on, you can sit happily in any battlefield without a care in the world. Even if you're shot, you won't feel a thing. Now if you could only remember Which button...do I push...to release...the shutter?

I've tried shooting after smoking pot. It doesn't work for me. The problem is that everything seems important, and I can't separate what I should shoot from what I shouldn't. I look at the pictures the next morning and think, why'd I shoot that? If pot has an application in photography, it's as an aid in simultaneously carrying on 50 half finished projects which you'll get to later. 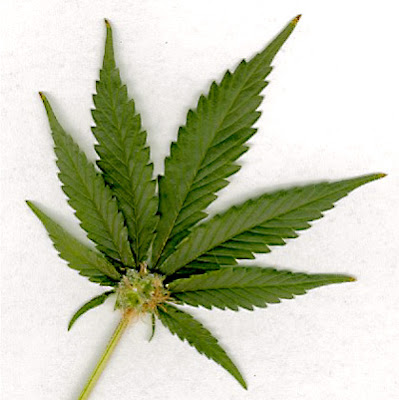 Marijuana: the gateway drug to unfinished photo projects
High school yearbook photographers have it rough. Hour after hour, day after day shooting the same pose, under the same lighting, with the same backdrop. Without proper drugs it might drive you crazy. The drug which seems to most closely mimic this experience is crack. Day in, day out, repeat ad naseum until reality blurs into a fog. I don't think you could shoot well while physically on crack, but the crack experience would probably prepare a person mentally for shooting yearbook portraits.

Alcohol seems like a natural fit for night photography. Most recreational drinking occurs in the evening. If you're hanging out at a scene waiting for your three hour exposure to finish, a flask of whiskey is comforting, and might even allow you to see shooting stars. Just beware too much drinking can lead to indecent exposures, or end the night prematurely.

The flying properties of Datura are well described by Carlos Castaneda in his Don Juan series. Casteneda got high, got sick, turned into a bird, then flew around the desert checking in on various spirits. If only he'd had a camera he would've been perfectly positioned for aerial photography. Another option for aerial shooting is nitrous whippets. Designed to aerate food products, these will get you high as a kite. Remember to deploy flaps before landing. 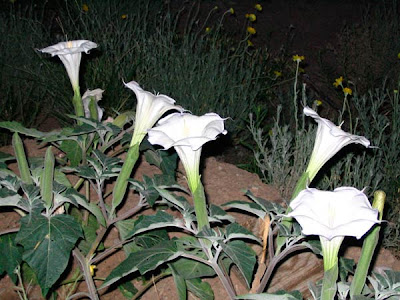 Datura flowers shot from a low hover
Most photographers find it impossible to operate any mechanical equipment under the influence of LSD, cameras included. It's probably best to just circumvent the camera entirely, take some objects and "magic" paper into the darkroom, and make photograms. Lay out your objects, push the expose button, check out the groovy lights. Now slide your paper into the liquid. Dude, you just made art! Be careful not to get sidetracked watching the timer or staring at your redlit hands. The spiral door leads to daylight.

In order to make good landscape photographs, you'll need to become finely tuned to your natural surroundings. The best drug is one that grows organically in nature, psilocybin mushrooms. As with LSD, the operation of complex mechanical tools may prove difficult. It's probably best to stick with a simple Holga or something similar, no fancy digital menus. Or better yet forgo the camera altogether and just use the inside of your eyelids to capture images. You can shoot forests, oceans, dunes, or whatever you want without ever leaving your home. If you do choose to venture into a natural setting, leave a trail of film lids to find your way back. 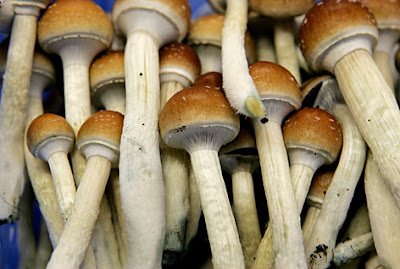 Do not leave a trail of magic mushrooms as a guide. It will disappear
A few years ago during the height of heroin chic, fashion photographers might've been advised to use that drug. Thankfully that movement has faded, since it's very difficult to photograph while high on heroin (with the possible exception of forearm pinhole). The drug of choice is now nicotine. Cigarettes are great on fashion shoots. They build instant camaraderie with the Eurochic crowd and help everyone keep trim. In nonsmoking cultures smokeless tobacco can be substituted or else a nicotine patch in this season's colors.

Photographers who shoot still lifes or product shots need to operate at slow speed. There are a few different drugs which can help photographers reduce speed, including quaaludes and barbiturates. Time slows down but focus can be difficult. Thankfully nothing is moving and you've got all day. And all night too, which you'll probably need. If you're burned out on commercial product shooting, there's always Prozac.
Posted by Blake Andrews at 9:29 AM

You opened my eyes!!! Now I know the reason for hundreds of unfinished projects.

Forgot to add another vital link: photoblogging and caffeine.

Brilliant. Very clever and witty analysis. I regularly shoot on one or another.

Whenever I had tried shooting wasted I would always say to myself "My God, why has nobody thought of photographing this before!". Then when I would come down and look at the results later, the answer would be painfully obvious. So it's only caffeine for me these days.

This is hilarious. Very well researched, I imagine. ;)

Yeah, I wrote the whole thing high on acid. Come to think of it, wait a minute, did I write that?

Many years ago I assisted two photographers each full time for over a year each. One was very sober and one loved to work high. I saw the sgtoned one get tunnel vision and pass by many creative avenues. It made him far les creative than the straight guy. Photography is about awareness, being open.

I've shot absolutely bladdered once in a club in San Francisco. I kept showing the pictures to people, all colour toned and massively blurry.
I was shouting: "look, they're all pink. Everyone of them is pink. Amazing". Or something similar. And the next morning some of them were still great - even if I wasn't.

"The same year, according to Mr. Kaltenbach, she embarked on a work requiring her to drop 30 hits of acid in 30 days. After this endeavor, her friends agreed, Lozano was a changed person. "