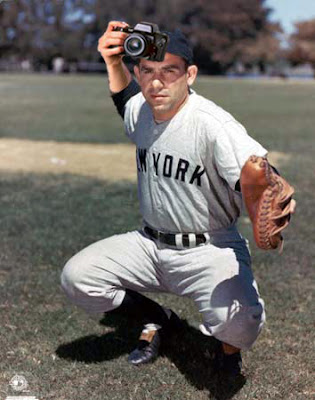 Baseball season already? I think Yankee great Yogi Berra could've been a photography teacher in another life. With minor changes many of his aphorisms can be adopted to photography:

Photography is ninety percent mental and the other half is physical.

A nickel spent on art ain't worth a dime anymore.

Half the lies a portrait tells about me aren't true.

Think! How the hell are you gonna think and photograph at the same time?

If people don't want to come out to the gallery, nobody's gonna stop 'em.

All photographers are liars or crybabies.

If a photograph was perfect, it wouldn't be.

Nobody goes to that gallery anymore. It's too crowded.

If you come to a photograph in the road, take it.

People ask if photography is over. To me, it ain't over til it's over.


Some of his quotes need no alteration at all. Zen photographers take note:

The future ain't what it used to be.

You've got to be very careful if you don't know where you're going, because you might not get there.

In theory there is no difference between theory and practice. In practice there is.

There are some people who, if they don't already know, you can't tell 'em.

If you can't imitate him, don't copy him.

You can observe a lot by just watching.
Posted by Blake Andrews at 5:33 PM

And one helluva chocolate drink!