When Zoriah advertises post-earthquake photojournalism workshops in Haiti he is excoriated. "You are a parasitical opportunist--plain and simple, and a disgrace to the profession," writes JM on Zoriah's blog, in a comment typical of the prevailing sentiment. And properly so. To charge folks $4000 to glamorize someone else's misery is disgusting. 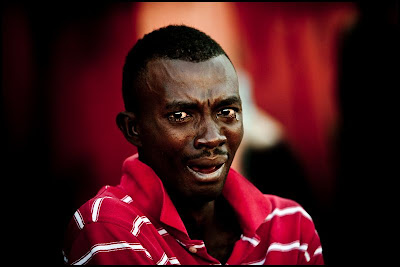 A man cries after is wife is shot dead by police during looting in downtown Port au Prince, 2010, Zoriah
So why is it that when Peter Turnley shows post-earthquake photojournalism from Haiti, he is treated as a hero? Mike Johnston can hardly contain his excitement as he posts the "world exclusive" shots. The praise is universal. "Eloquent story telling!" writes a typical commenter. Is it? 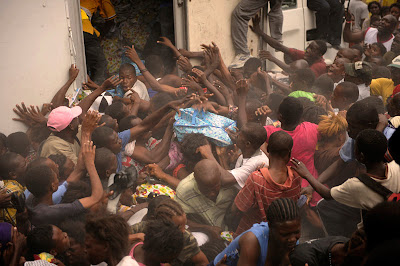 A food distribution near the Champs de Mars in central Port-au-Prince. Feb.1, 2010, Peter Turnley
If there is much difference between Zoriah and Turnley, I don't see it. Yes, Turnley shot on his own rather than selling the thing as an adventure. But basically it amounts to the same thing. Human suffering makes for great photographic subject matter. I won't deny that fact, but to capitalize on it in any way is pathological. Both men do so, and to treat them so differently seems hypocritical.
Posted by Blake Andrews at 10:50 AM

Interesting thoughts. I always thought I was missing something when I couldn't see the real point in glorifying these types of documentary photography (go to a disaster and document it). In a way, they are necessary to be shallow on a certain level. I mean, pathos is pathos, real or staged, and although inevitable, I can't see how can a simple documentary story of a disaster be labelled as deep, artistic or anything similar - other than moving, which it is because people universally feel empathy.

The entire field is obsessed with suffering, isn't it? I wonder if any top awards have been awarded recently to non-suffering coverage. It would be fine if it was half and half coverage between suffering and more positive, constructive, long term projects, but there isn't.

An audience drawn to drama is surely a part of it. Maybe more reason to expect the big honchos in PJ to run their operations less for profit and more for higher principles. But what can you say when a man has to make a living?

Well, that's the point. I think people wind up making those sorts of photos because they work well on the front pages. Instant emotion, instant connection. But photographically they don't push any boundaries. And maybe they aren't meant to? I don't know. I just thought the contrast in reactions was interesting.

without more information than the immediate disaster the victims become cliches of desperation, agony, death, looting, etc. The reportage attempts to document, as it should, but it lacks depth and history, and creates a skewed idea of the people and the country.
Same with Iraq...how often are the civic leaders, human rights advocates, poets, artists, intellectuals, scientists given media attention?

if you read spanish, La Jornada, included more than disaster in their Haiti supplement.

I think one may make a distinction between a professional who covers a myriad of wildly ranging assignments, and those who are not only disaster paparazzi, but venture capitalists directly marketing off the misfortune of others.

This approach wouldn't be viable here (at least not right now), but it is an interesting alternative to documenting the misfortunes of others:
http://www.evaleitolf.de/GI001.html

But what is the distinction exactly? I'm not saying there isn't one but I'm wrestling with how to describe it clearly.

Well, I thought I gave it a fairly decent shot in my first sentence!