I discovered these photos a few weeks ago thanks to Bruce Hall, and they've been great fun to look through. I think this must be the oldest color photo series I've ever seen. They were made by Sergei Mikhailovich Prokudin-Gorskii in pre-Revolution Russia by exposing three sets of glass plate negatives through red, green, and blue filters. A brief description of the process is here. 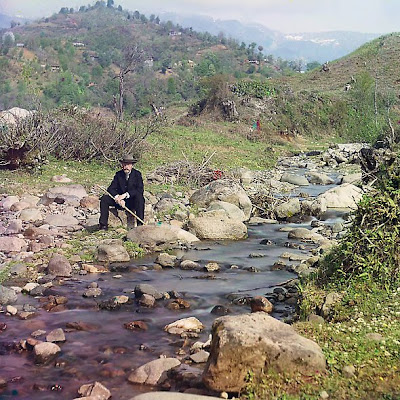 Self Portrait by Sergei Mikhailovich Prokudin-Gorskii 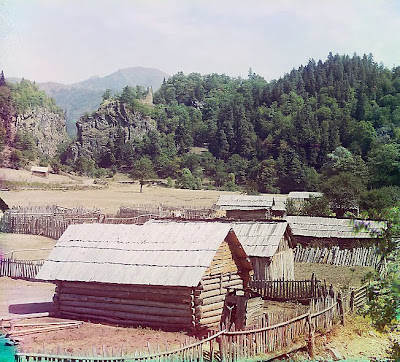 Log buildings in the Ural Mountain Region; c. 1905 - 1915, Sergei Mikhailovich Prokudin-Gorskii
I find these pictures mesmerizing. Some of them look like they could've been made yesterday. Others have unmistakable traces of their age like old artifacts or wooden buildings or strange dress codes.

I've seen many similar photographs of this time period, but always in black and white. To see them in color is surreal. It's like a Calvin and Hobbes strip: 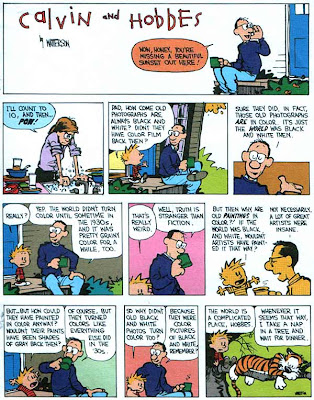 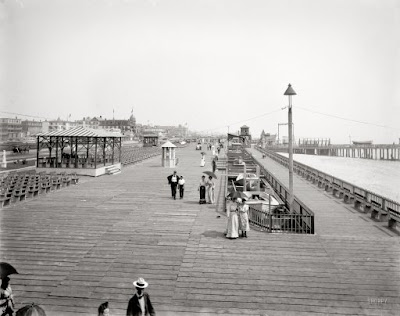 New Jersey circa 1905, Detroit Publishing Co. via Shorpy
Now imagine a scene from 1500, before photography. I'm guessing it's in color. Or imagine any contemporary scene now that color photos dominate every media. Photography has a huge effect on perception and on imagination. I think that's why these old Russian photos seem so jarring. 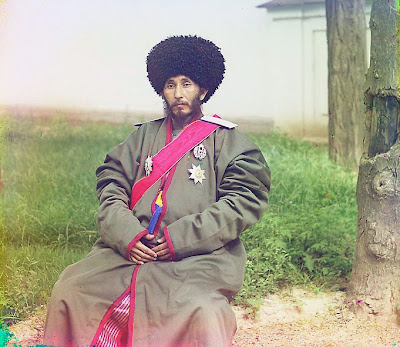 Isfandiyar, Khan of the Russian protectorate of Khorezm (Khiva), c. 1910 - 1915, Sergei Mikhailovich Prokudin-Gorskii
They look imagined, and in fact one reaction is to suspect they must be doctored. The comments field below the Denver Post's article is full of accusations back and forth about the veracity of the photographs. The fringing looks Photoshopped or the colors look too bizarre or orange didn't exist back then or whatever.

Trust me, they're real. Those scenes existed in color and so do the images depicting them.
Posted by Blake Andrews at 12:02 PM

I remember seeing these but couldn't figure out where. Then it hit me that a friend of mine emailed me a link to this archive last year so I searched my inbox - http://www.prokudin-gorsky.ru/database.php3?first=0. There's almost 2,000 images but only some are able to be enlarged.

Blake
I've run into these photos for work before at the library of congress site loc.gov they're full bleed and you can see the edges of the plates. cool stuff

That's like WWII being a "black and white" war and one of the things that made "Saving Private Ryan" among others so effective.

...and (now that I think of it) I remember going to my first ballgame. My grandpa took us to Ebbets Field to see the Dodgers. I must have been about 7 at the time and remember very clearly being surprised that the field was green and brown, not B&W as my previous experience of the game from TV.