Apple's Photo Booth has become the latest favorite toy of my kids. Our version (3.0.1) has all sorts of entertaining effects from funhouse mirrors to moving backgrounds to Lichtenstein halftones. My kids sit on my lap or stand nearby. Sometimes we don't even take photos. We just put ourselves on the roller coaster set and roll tape. Other times we snap away. It's a source of endless amusement and a fun way to introduce young ones to photography.

Blake, Zane, Emmett in Apple Photo Booth
Apple's Photo Booth is of course a digital version of the real thing. Although there are pockets of revival, Photo booths are slowly fading into the past. Most people below a certain age —my kids, for example— have never seen a physical machine. Soon those little four-photo strips will be as rare as cartes de visites, a small nugget of the photographic past to be shown in a scrapbook or museum. The site Photobooth.net, which does a pretty decent job of describing every single photobooth location in America, has taken on the feeling (albeit upbeat) of an obituary page. The stream of photo booth decomissionings is constant.

From the Gallery at Photobooth.net
I suppose that by using Apple's version I am part of the problem. I realize that fact but it doesn't change the basic equation: Why go to a special location and pay money to do something that I can do comfortably for free in my own home? With kids especially, the computer is liberating. Kids burn through film like wildfire, but a computer? Shoot away. And no need to make costly prints. The results can be seen instantly on a monitor.

All of which is just a microcosm of the broader photography world. It's never been cheaper or more convenient to make images. Billions of new ones are made each day, a small fraction of which are ever printed. Most exist on monitors like the hundreds of Photobooth shots my kids have taken. I've never printed any of them. 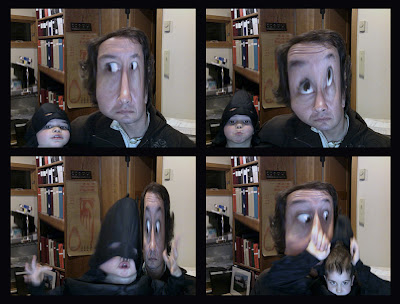 In the computer age, the vertical strip gives way to the four-square
I know this isn't news to anyone, and there's certainly no turning back the clock, but when I think of photo booths the situation seems somehow more tragic. Photo booths aren't really about making photos as much as they're about ritual. There are easier ways to make portraits, but you choose the photo booth to mark an occasion. You step inside the private space, almost always with another person or two or three. You close the curtain like a confessional and you're in your own world, visible to outsiders only as legs. You press the button and 4 photos (why always 4?) are made in succession. It's like being in a snippet of a movie strip, with slight changes frame to frame but not enough to disrupt the essential character of the act. A few minutes later out comes the vertical strip. From that point on, that strip is the reference. Every time you look at it you remember the whole ritual.

Always ahead of his time, Andy Warhol treated photo booths with digital nonchalance
Apple's Photo Booth isn't like that. There's certainly no curtain. No confessional. When I look at the shots later they all blend together. I have about 500 of them and I can't remember what I was doing in any particular one. Messing around mostly. They're like cheap songs on an iPod shuffling by, not tied to any event or moment, not "Live" in any sense of the word. When I turn the device off they stop existing.

I just wish making them wasn't so much fun.
Posted by Blake Andrews at 9:44 AM

I wanted to share with you some of the benefits my children take away from the delightful photo booth application. Yes, while it may be fun to stand in front of the eiffel tower or create your own enchanted undersea portrait, it is also a very practical household tool.