After Helen Levitt's death last week, this was the image of hers which seemed to get the most circulation on the web: 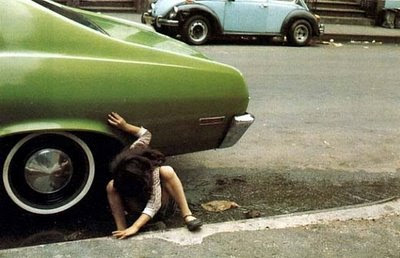 Helen Levitt
The juxtaposition of limbs is nice, and the sense of mystery. What is she looking at? And I like that the photo feels dated. Making a photo like that today is much more problematic than during the 70s. Kids are now basically off-limits photographically. If you shoot them in public you're presumed to be a pedophile or worse, and if you shoot one with well juxtaposed limbs you're really asking for it. So, as with many of Levitt's kid photos, this one makes me nostalgic for her simpler era.

I kept seeing this image last week over and over and each time it seemed strangely familiar. There was something about it I'd encountered before last week but I couldn't put my finger on it. It wasn't until this morning that it finally hit home. I'd seen that very car in a Stephen Shore photo! 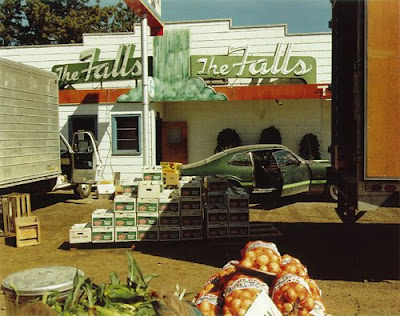 U.S. Rte 10, Post Falls, Idaho, August 25, 1974, Stephen Shore
OK, so maybe it's not exactly the same car. But isn't the similarity creepy? Sigh, I think I'm in a serious Stephen Shore rut which promises to become even more obvious next week on this blog. Stay tuned...
Posted by Blake Andrews at 3:03 PM

This kind of pan-generational sharing of photographic elements, a kind of echoing throughout the ages, is explored in a fascinating way in Geoff Dyer's book 'The Ongoing Moment'. It's a great read, especially from someone who says he doesn't even own a camera!