Emmett's been experimenting with my Instax camera lately. He's taken many close up flash photos of our cats, baby chicks, and various car interiors.

But mostly it's been selfies. I suppose any post-millennial 10-year old is a natural narcissist. The me-me-me meme is strong with this generation, and Instax has fostered the selfie instinct by making extra freaky pictures. After I posted this one on Tumblr a few weeks back, fellow Instax user Attila asked me how I'd made it. 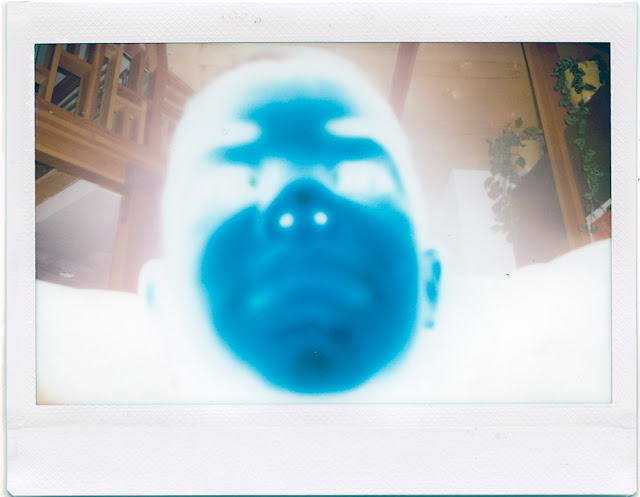 Easy, I said. Emmett shot himself at close range and the Clayden effect kicked in, turning his face blue.

Attila replied that he'd tried close selfies and been unable to get the same effect.

The Clayden effect is mysterious, I explained. Sometimes it hyperexposes and sometimes it doesn't, and that's part of its charm. The fact that it's specific to thick films like Instax which few photographers care about is only icing on the cake.

You throw the line in. Sometimes a fish bites, sometimes it doesn't. That's the formula for most photographers, fishermen, and poker players. But for some reason Emmett has the magic touch, and is always able to catch something. He holds the camera about 10 inches from his face, angled slightly up, puts the flash on, and Bingo! Dark blue Clayden effect every time. Not so mysterious. Here's one he took yesterday. 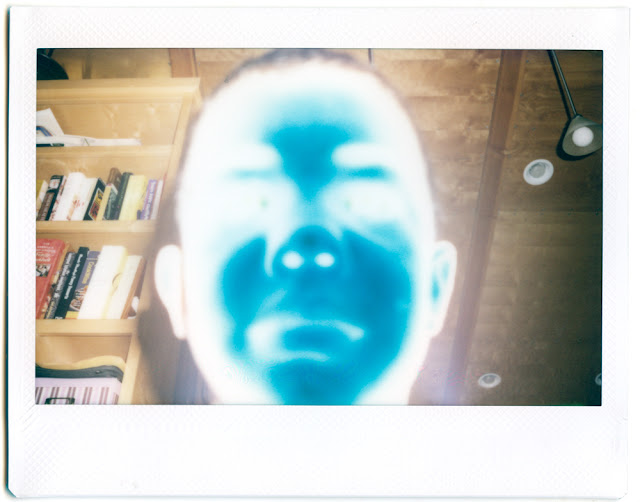 After seeing Emmett's recent pictures and thinking about Attila's question I figured I'd make one myself.  I held the camera 10 inches away and fired, and got this. 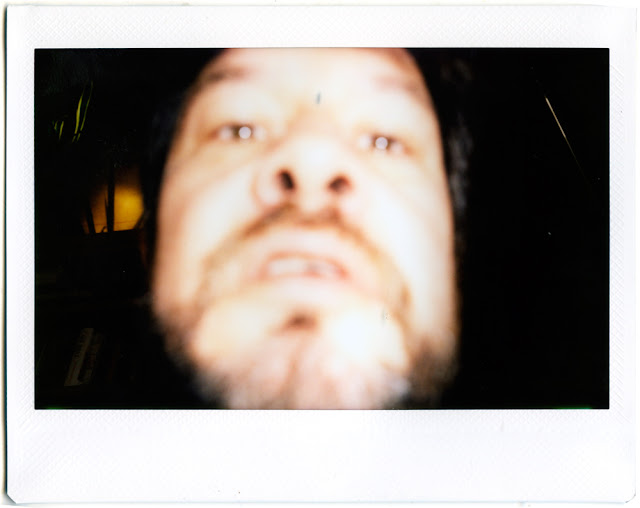 Hm? Not only was there no Clayden effect, but I look butt ugly.


I turned to Emmett, "How'd you do that again?" He grabbed the camera and calmly made another one. Bingo! 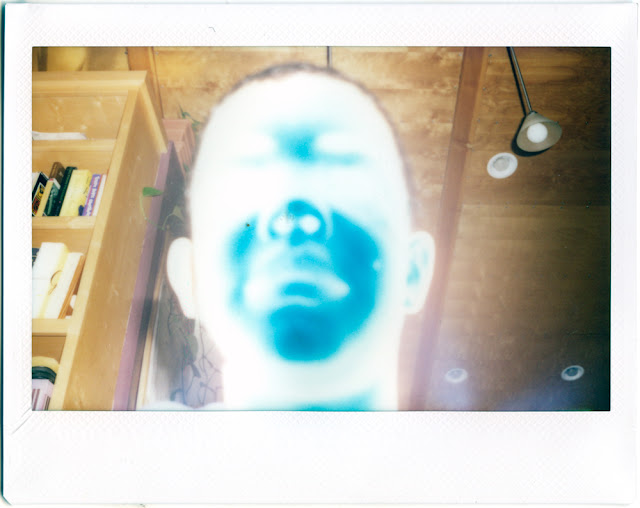 Now I was determined. I noticed that Emmett's face was slightly further away from the camera this time. I used the same camera position, perspective, and settings, mimicking Emmett's staging exactly. But instead of fluorescent colors I got another butt ugly reminder that I need a shave. 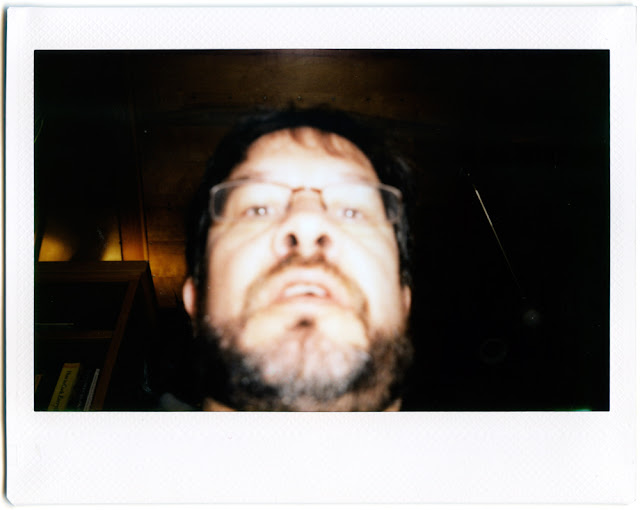 No Clayden again! WTF? I felt like Charlie Brown pulling rocks at every Halloween house while Emmett got big chocolate bars. Once in a while might be an accident. But every time? What was going on? Instead of charming, the happenstance nature of the effect was beginning to seem rather bothersome, and not very happenstance at all.

I decided to try one outside. I think my (normally exposed) expression shows my anxiety level. 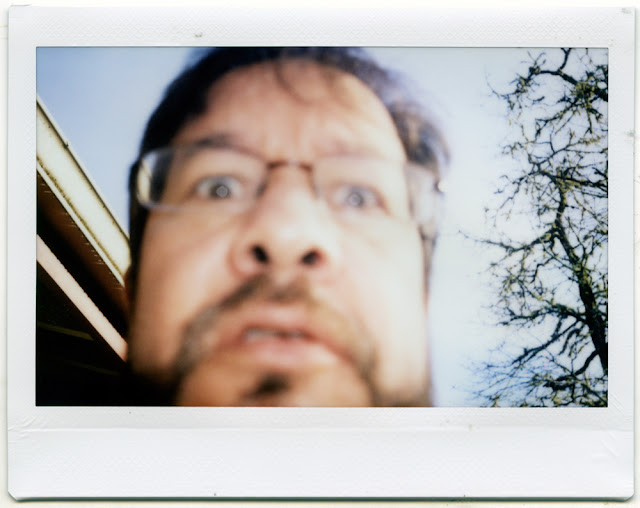 Emmett only made matters worse when he took the camera, pushed me away, and made this photo of himself right where I'd been standing. The little fucker! Now he was just rubbing salt in the wound. 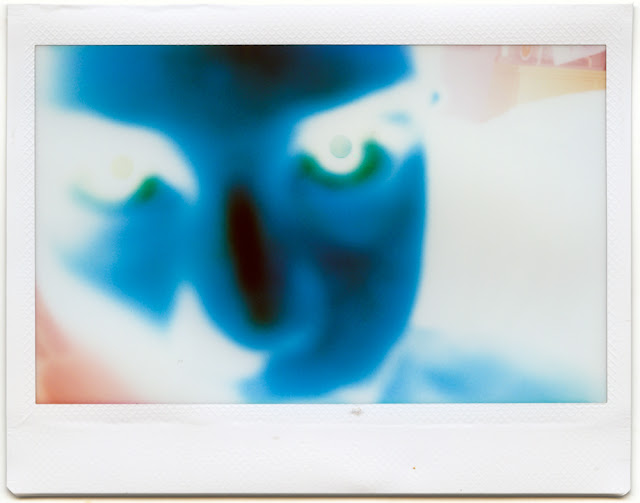 So it turns out the Clayden effect isn't so easy after all. Unless you're Emmett.

There's an old saying that the definition of insanity is repeating the same action over and over, expecting different results. This definition was very close to what I'd been doing with the camera. I'd controlled for all variables but one (the subject), and not only had the camera produced radically different results, but the results had held up under more experiments. If I were a scientist I might be onto something huge! But alas, I'm not. Instead I'm completely stumped. Is it something to do with paleness or my beard? Emmett and I have similar skin tone. Is the camera exposing for the inside of Emmett's nostrils, or his eyes? Is Emmett projecting some telepathic mojo onto the film?

I've always welcomed accidents in my photography, and before this point I'd seen Clayden marks as fortuitous events. Like lightleaks or birds in flight, sometimes they appeared in just the right time and place in a photo. Their mystery was fun the way early REM was fun back when you couldn't make out what they were singing. Now that Emmett could repeat Clayden on cue it had become slightly less fun, and definitely less understandable.


If I point a camera at a scene, leave the settings alone, and repeatedly generate inconsistent results, what does that tell me? When it happens in a Peanuts cartoon it's dark humor. But what about in real life? Dark blue/green humor? The results seem to challenge basic photographic dogma. If you can't trust your camera what can you trust? Certainly not the photo itself. Unless you're Emmett.

It's probably clear by now that my experiments defining insanity were leaving me frazzled. I had to call them off.

Last week Lisa showed up to photo group with a new version of the Instax Wide made by Lomo. In many ways it was the camera Fuji should've made but didn't. I've whined about Fuji's Instax cameras before, so no need to go into that. Suffice to say their wide model line has been static for the past decade. So Lomo beat them to the punch in December with a new wide Instax offering multiple lenses, multiple exposure, slow shutter speeds, and many of the basic features we've come to expect from modern cameras.

When I saw Lisa's camera I thought briefly about switching over. The Lomo would offer me much more control over my photos. But the urge quickly passed. One reason I like Fuji's Instax is that it offers less control. It's a dumb plastic point'n'shoot. You toss the line in. What bites is beyond your jurisdiction. Any child can use it.
Posted by Blake Andrews at 10:34 AM

Does your Instax camera have a photocell you can cover with your finger while holding it the other way around? If so, give it a try the next time :) Just an idea.

Emmett's an Indigo child- you just need a shave...

Funny, ever since Annie (my 7 year old) pulled it off on a ferris wheel (image in the Tumblr archive) I've tried it to no avail. She placed her hand in front of the lens and it created the perfect accident - a bright blue electric hand, etc. Many "failed" attempts since with my own hand. But now, at least I know not to waste time on myself moving forward, Thanks...

With both Blake and CJ getting a negative result with an "male of a certain age" and the pre-teen kids getting a positive result might I suggest that this has something to do with light (IR, perhaps?) scattering in young skin?

Light scattering in skin (sideways) off thin fibers then reemerging through the surface is significant in making skin look like skin and not rough plastic (as early CGI people found when they tried to render skin).

There's also some evidence that the spectrum of the scattered light changes with age too. Does that have an effect?

The obvious experiment is to control for distance and exposure (which you've attempted yourself) and try this on a range of ages pre-teens, teens and young adults to older adults and see when the effect stops. My hypothesis would suggest that the effect would be seen in younger people and would stop being seen at some age. I'm curious what the age is.

I guess the sample size is limited by your budget at $1 a shot.

The mistery of the Dwarf effect. Blake, you looks like a negative (or positive) of Papa Pitufo

Have you tried taking a "selfie" of your boy? I mean he sets it up, you take the camera and press the button in the same place and angle he had it. That could prove whether he had magical instax powers or not.

Thanks everyone for the suggestions. I'll keep trying new experiments. It's still mysterious. Maybe that's a good thing.

Did you try the experiment I suggested? If you're not willing to shave and luveVaseline, you could try photographing other fresh and fair skin. Remember, the Clayden effect is about uneven exposures. You need a really intense (but relatively small!) light. It doesn't even need to be an actual emulsion. You are simply exposing your medium unevenly to the expected exposure.

This cool. So the "Emmett Effect" is a subset of the Clayton Effect? Neat.