Thank You For Sending Me An Angel

The images below were forwarded by Gary Swanson, who was thumbing through old photos recently and noticed the same woman caught by two prominent photographers. I'm not sure who she is but she's quite angelic.

The first image is probably better known. It was shot at the 1969 Met Museum Centennial Ball by Garry Winogrand, and appears in Women Are Beautiful. 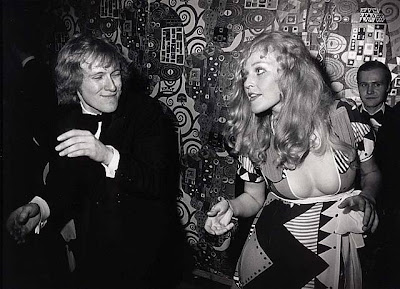 Lo and behold, Larry Fink was on the scene too at more or less the same moment. Less of a boob man than Garry, apparently. 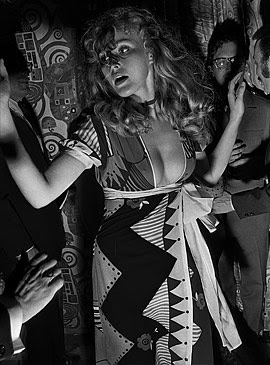 Funny. I wasn't sure what to post today until this came along. Thank you, Gary, for sending me an angel.
Posted by Blake Andrews at 12:05 PM

The same angel appears in "Public Relations" as well - probably the same party at the MET. Actually The two shots are likely to be very close in time.

It's not in my copy of Public Relations (the reprint), although several photos with the same backdrop in that book helped me identify the place and time. Curiously, Fink's photo appears on the cover of his book Night at the Met (http://www.daylightmagazine.org/blog/2009/8/25/492) which identifies the date as 1968. Not sure which is correct.

The photo I mentioned is on page 103 of my copy of PR, which I believe is the reprint too. The same backdrop with motifs can be seen and identifies the pic as the same event. If the photo is not in your PR copy I can make a scan of it if you want to check it out.

Also since the MET was founded in 1870 I guess the centennial ball should have occurred in 1970 which is even more confusing (anyway unlikely it was in 1968).

Also Winogrand did several shots of that woman that with a white feather costume at the same MET ball (PR, page 102 of my copy) but I think she also appears on the very left of a a shot at Frank Stella exhibition (PR page 50, a favorite of mine)

I get it now. I thought you meant the same photo, but it's the same lady in another photo.

The guy with glasses in the upper right corner of Fink's photo can be seen in another one (pg 69).