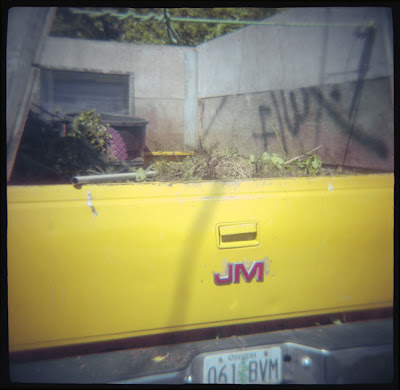 Which raises the question, How should this photo look? I'm not sure. I just know that the way it turned out is the complete opposite of picturesque, and that's enough to go on for now.

It's just a friggin tailgate and some garbage. The colors are jarring, the corners are fuzzy, the point of view is pedestrian. There's nothing special about this photo but in the past few days it has really penetrated me despite my best intentions to escape it. If I tried to go out a take another photo like this, I couldn't. Because it looks like it shouldn't.

I don't know if Dave Woody likes this image but he's getting a print. Dave supplied the film in response to this modest proposal. Wherever you are, Dave, thanks and heads up. This photo is aiming for you, and it may penetrate deeper than you expect.

For everyone else who sent me film, you should either have your prints already or expect them within the week.

And what am I going to do now that I've finally gotten everyone's prints out to them? Tonight I'm going to turn it loose with the silver bullet! 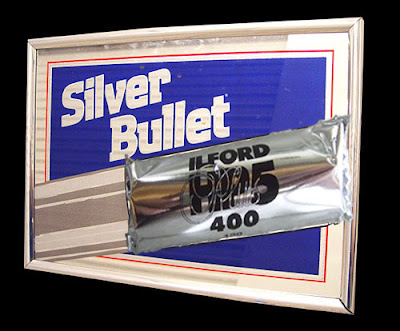 Posted by Blake Andrews at 7:43 AM

A compelling image doesn't necessarily have to have a story. The genius of photography is its subjectivity from both sides of the camera. On one level it is just a pickup with yard debris in a loading dock; but the bold color & the muted colors & the elements of composition automatically engage the mind; the urge to take this picture reminds me of my cell phone which says message received & I later read the message. I have come back to this pickup truck & yard debris in a loading dock & I will probably look at it again. I follow a couple of homeys from the Portland, Oregon, area on Flickr. It is interesting to see them grow into a way of seeing, & similarly they often don't know why they are there, but they intuitively know that they are. If you are interested they are: expensive habits & polaroidman67. I am on Flickr as philoxenia.

Isn't it a question of trying to forget what a picture 'should' look like and reach some kind of supremely confident state where "It must be worth looking at because I decided to photograph it". Most of us are too full of doubt to get anywhere near this kind of zen arrogance. . I know I am. Eggleston seems to have got it nailed though ;-)
Jon

I think one of the reasons for the power and strength of this photograph is that it has a main event: the mammoth block of yellow with the initials. Photos with a lot of little elements require thought and attention to figure them out. This one just wallops you with a big thunk.
And the supporting elements above and below, by their dimness, project the yellow band out even further.

Nice one. I currently crave this kind of photography. The whole establishment has such specific and limiting expectations of what a photograph is/looks like/does that I'm often left discouraged by the all the discussion (and the accolades) generated around the same ten photographic strategies.
Eggleston understands that the difference between photography and painting is in the process but not so much in the product. And I'm talking about painting (pigments on surface) and not iconography (visual analogies). That insight truly opens up his practice to a fantastic range of options and delights.
In the same vein I really appreciate the works of Wolfgang Tillmans and JH Engstrom. Also Rexler's book "The Edge Of Vision" has some fascinating ideas and corrections for our current photographic dialogue.