Now that color has come to dominate contemporary street photography, the art world's gaze has turned to the past, to see what color gems we may have overlooked during the b/w era. The trend started several years ago with Winogrand 1964, which published many previously unknown color photos. A few years later, Saul Leiter was uncovered. Recently we've seen color monographs published by b/w stalwarts Mark Cohen and Barbara Crane, and this fall Palm Springs 1960 by Doisneau and a new consideration of Haas will be published. The early color gold rush is on, with many tailings yet to sift through.

As long as we're reconsidering early color, I think it's worth taking a fresh look at Fred Herzog. His color work is on par with the folks mentioned above, but I suspect he is less well-known than any of them. Now approaching 80, Herzog just finished up an exhibition at Laurence Miller Gallery in NY. The selections below were pulled from the website of Equinox Gallery in Vancouver. You can order a gallery catalog from the site for $20 plus postage. 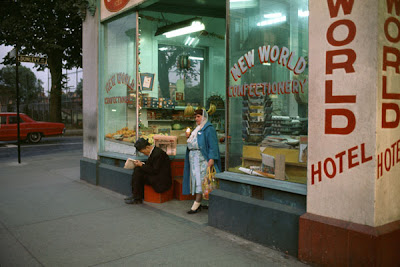 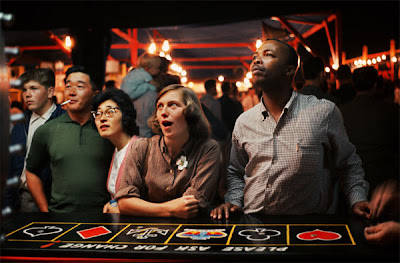 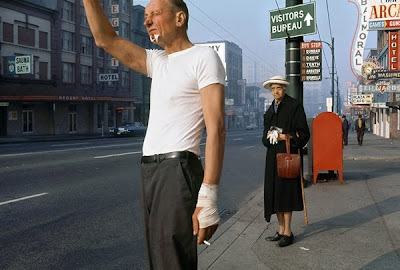 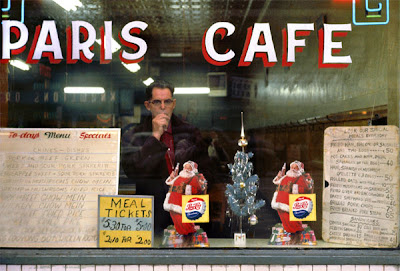 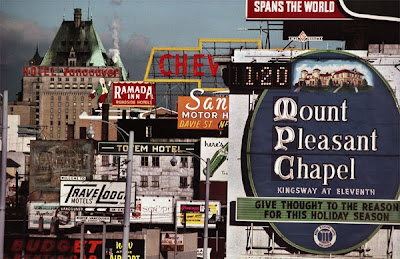 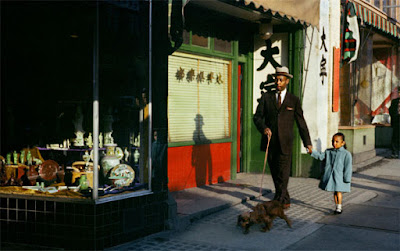 I was just looking through my copy of Herzog's Vancouver Photographs yesterday, and there is a picture of Magazine Man as above but shot from a different angle. Both good, but the one you posted shows a wider scene which I like. Having lived more than ten years in Vancouver, his work is extra special to me...
Tiffany

How does this exhibition compare to the Vancouver Photographs? I've been meaning to get that book, but I keep stalling since I've never seen it in person...

what about helen levitt?? Her color work has now eclipsed her bw in the last few books--she shot color for a period in the 50s & another in the 70s. She might have been knocked out of your tourney early but she's hard to beat!

I guess Levitt could be included but her color work has been known, at least in some circles, since the mid70s. But you're probably right that until 2005 it was overshadowed by her b/w.

I don't have either Herzog book yet so I can't compare them.

Wonderful book to look through for same reasons is ' 50 years modern color photography 1938-1986' with some neat surprises....Eng/Ger book by Photokina... recently saw onebay....

Blake: Nice selection here. The "Vancouver Photographs" book, which I happily own, combines old gems with not so up to par colour work from a later period. I think this conspires towards an appreciation of Herzog as a true great one. In comparison, Saul Leiter's fantastic New York colour output, disseminated to the great public by Steidl, does a better job: it seems to hit the bull's eye everytime, from page one right to the end.

I'm familiar with Herzog's work having seen his wonderful exhibit at the Vancovuer Art Gallery, at a recent show at the Equinox, and I also own his book. Yet, I'm continually astounded when I see his colour photos. As you noted, Herzog was taking slide frames in an artful way before many of his contemporaries who are often credited at being the first to make the transition from monochrome, like Joel Meyerowitz.

I'm not from Vancouver but I've lived here for nearly 7 years. It is Herzog who I credit as giving me a sense of the early modern city. While Herzog is celebrated locally, I have the sense that his name doesn't go far beyond the Vancouver city limits. In addition, there are few, if any, star-studded street photographers who have ventured up this way, so Herzog's photos are the ones which tell the modern story, at least to the 80s. For what it's worth, Magnum Photos only lists 19 images taken in Vancouver.

Now that the city is coming into its own, I'm wondering if Herzog's images will gain a wider audience. It took the Vancouver Art Gallery until 2007 to recognize him with a solo show. They did it well, and so did Herzog, who managed to save many of his own slides from a fate of mold. You know how it is up here with the rain!

Anyway.. considering Herzog's use of colour, he really deserves a wider audience and I'm glad you posted this. Also, several years ago I was pleasantly surprised to find his name listed on the In-Public website.

I'm told that Herzog continues to shoot though like most people, he has switched from his characteristic Kodachrome to the more relaxing pace of digital. There are some recent photos of him on Flickr along with a portrait at the Vancouver Observer.

Fred Herzog's great to look at...

"Now that the city is coming into its own"

I'm just curious what you mean by this? Many long-term residents consider Vancouver to be entering a dark period, a decline, if you will. Herzog himself has made disparaging remarks about the place.

I actually know Fred well. He finds it amusing that the shots he offered as stock back in the eighties (but were refused) are now considered "art."

Long term residents don't want change. They liked Vancouver as it was -- small and with a focus predominately on nature. Well before the 2010 Winter Olympics, Vancouver walked onto the world stage. It consistently ranks as one of the world's top cities for livability and more often than not it is #1. Through immigration and migration from the rest of Canada, the city has become a multicultural and bustling metropolis. It won't take long for Vancouver to become a cultural centre of Canada, if it's not already as a contact of mine exclaims. My point of saying that Vancouver is coming into its own was to emphasize that the city itself is no longer a clumsy teenager. My point is that Vancouver is quickly becoming an established city rather than an afterthought in Canadian politics. "The west is in," right?

I honestly don't see too much darkness around, at least locally. It's the world at large that gives me extreme pause. While not all things are going well in the city or in our province, I find myself more of an eternal optimist than anything else. With the recent news of Vancouver taking a lead in sustainability and the new convention centre being rated the first certified LEED platinum building of its type, I think the city is doing better than worse. The Canada Line was expensive but also phenomenal. Compared to many cities I have visited, we do better in a host of categories. While the city has come of age though we still must find a way to manage the growing pains, one of which is housing. It continues to be one of our biggest pressures and we seem to be making little, if any, progress.

But since we're both interested in photography, I must say that one sign of hope is the Vancouver Art Gallery. Not only did they give big props to Mr. Herzog, but they are working diligently to make of major expansion to their small operating space. In the near future, they will either renovate their current location or develop a new and larger home downtown.
Additionally, I believe there is a means of balancing what older residents value in the city as well as the other things that make Vancouver attractive to the rest of the world and people like me. In 2011, I will be traveling with my wife to Melbourne, Australia where she will begin a research exchange to examine urban sustainability, including the environment, policy making and many other livability indicators between these two leading cities. One of the many topics she includes in her research is art. Nevertheless, I'm intrigued by your disparaging remark comment.

The city has a vibrant art movement though most of it is organized through the community, like the Eastside Cultural Crawl, Booooooom!, and The Cheaper Show, which just had it's largest and 10th anniversary exhibit. This is a more equitable system than allowing one curator at one institution make decisions about what constitutes quality creative works. I would like to hear Herzog's thoughts about the city especially since he himself was an immigrant. I am too. I arrived via Chicago and Detroit. This flux of new people is one reason why Vancouver is special. The diversity is evident in the plethora of food choices and wonderful restaurants that the city now offer. It's not just "Canadian" food which one restaurant advertises or fish and chips, but Japadogs.

Anyway... I still remember coming across the Granville Bridge and taking a taxi into the city in 2002, my first visit to Vancouver. I immediately recognized that Vancouver was a special place. It still is. I think the rest of the world knows this, too.

Regarding Herzog's experience with stock photography: he gives me hope. :)

thank you for sharing, his work is new to me. wonderful stuff!

Thanks for sharing, really like your view. Waiting for some more great articles like this from you in the coming days.

Currently, FRED HERZOG: PHOTOGRAPHS is under $30 while copies of the once-$20 'Vancouver' catalog are being price-gouged by the Equinox Gallery for a ridiculous $100.