The current Blue Sky exhibition of Livia Corona's Enanitos Toreros is an interesting experiment in presentation.

Covering one wall is the largest photo I've ever seen in person, a sixteen foot high version of this image: 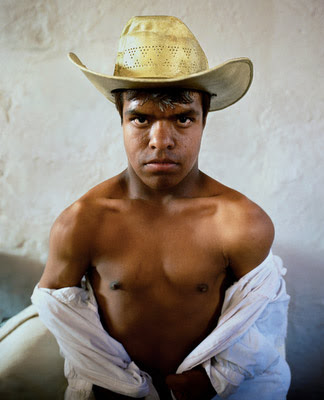 from Enanitos Toreros, by Livia Corona
The print is composed of 2.5' wide strips of what I'm guessing are Chromira prints. No framing. My eye was about even with the nipples.

Along the other three gallery walls is a continuous row of several dozen small prints, roughly 5 x 7" each, tacked to the wall with pins, no frames, no gaps. The row is positioned about 90 inches above the floor, well above the 58 inch standard height. After looking up at a few of these, my neck began to hurt.

The radical size and positioning reflects the show's subject matter. Enanitos Toreros is a photographic essay on Dwarf Bullfighters and the subculture surrounding them. From the perspective of a Dwarf Bullfighter, looking up at any normally hung photo show would begin to hurt one's neck, so the tall placement is meant to give a taste of that. And I suppose that to a dwarf, many contemporary gallery prints seem as Leviathan as a 16' tall photo. Standing eye to nipple is nothing new to a dwarf.

OK, point made. As a spur to consider new perspectives the presentation works pretty well. The show broadened my worldview. But as an incentive to actually look at the photos and consider each one, I think the presentation failed. How can you analyze a photo if you can't see it clearly?

The show's odd layout made me think of William Eggleston's Guide. I've always been curious about the placement of photos on the page in that book. Some are at the top, some are at the bottom, some in the middle. The position on the page seems to roughly correspond with the perspective of the photo. For example, the famous trike shot is at the top of the page because the camera looks up at the trike. 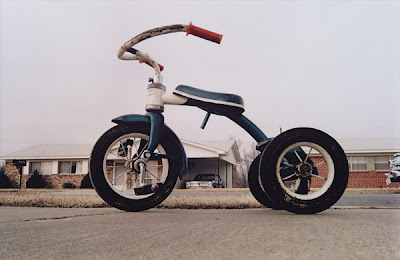 Memphis, William Eggleston
Whereas the jigsaw photo, shot with camera looking down, is at the bottom of the page. 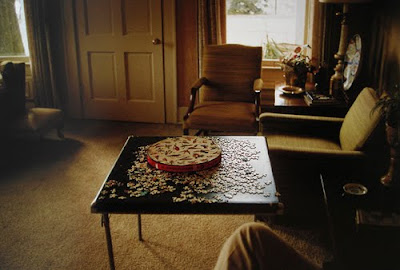 Tallahatchie County, Mississippi, William Eggleston
The correspondence isn't exact. Some photos aren't laid out like they should be, and most just float in the middle of the page. And the layout is mostly abandoned with respect to horizontal position.

But the overall effect is unavoidable, and similar to the Corona show. It makes the viewer aware of the photo's position in space, something they probably weren't even thinking of before. With Eggleston's photos, I am brought back to the scene of the photo. I imagine I am there looking with him through the viewfinder. With Corona's photos I imagine dwarves spending a lot of time at the chiropractor, which is something I wouldn't have even considered before.

If you make it to Blue Sky be sure to visit Hartman next store to see Mark Steinmetz's Greater Atlanta. As far as I can tell, this is the show's only west coast appearance. Great photos, great prints, all hung at eye level.
Posted by Blake Andrews at 7:33 AM

Without going into it in great detail, I thought this work and Suk Kuhn Oh's work in the next room were both exercises in scale as much as anything else.

You are blogrolled on my blog! ;D

Saw the show today and completely agree. The presentation detracted from the images content. I was disturbed that the height/size statement took priority over what was actually photographed. The book was better......