One of the attractive aspects of American Prospects is that many of its photos depict the aftermath of dramatic events. I don't know if Sternfeld carried a police scanner on his cross country travels but at the very least he was paying close attention to headlines and steering the car accordingly. His journey seemed equally informed by Uncommon Places and Naked City.

Yet unlike Weegee he was no news photographer. Rather than explaining situations, his photographs tended to muddy them. Images of a car upside down in a gulch or firefighter buying produce, e.g., leave the viewer wondering "What the F_ is going on here?" 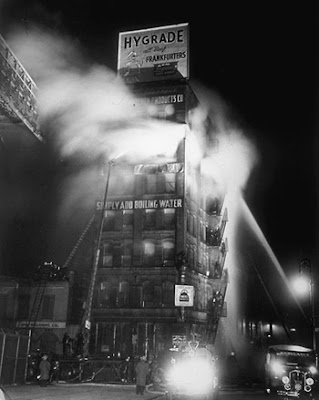 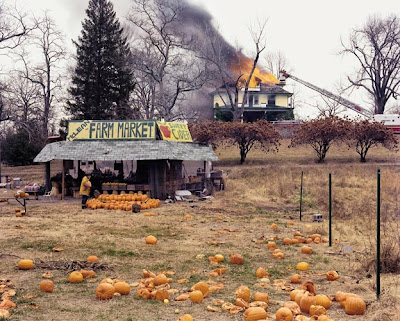 McLean, Virginia, December 1978, Joel Sternfeld
If he was no Weegee, neither was he Shore. The photographs of Uncommon Places are so drily descriptive that they are better referenced by Google Street View than by newspaper accounts. In contrast, Sternfeld was drawn to specific events.

With the digitizing and archiving of old newspapers these events can now be revisited and seen from the perspective of their times. Seen, in other words, as Sternfeld saw them. Perhaps finally after all these years we can gain a sense of "What the F_ is going on here?" 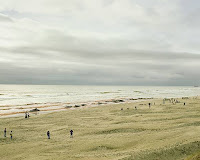 Back in June I made an initial probe in this direction, investigating the back story of Sternfeld's whale shot. A few months later Michael David Murphy wrote a similar profile on insig.ht, this time about Sternfeld's elephant-in-the-road photo. 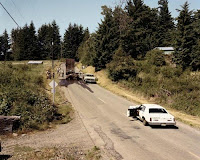 This post begins a new series investigating some of Sternfeld's shots through the lens of old news articles, beginning with After a Tornado, Grande Isle, Nebraska, June 1980 (image 23 in the 2003 version of AP). Here is the image (sorry for the poor scan): 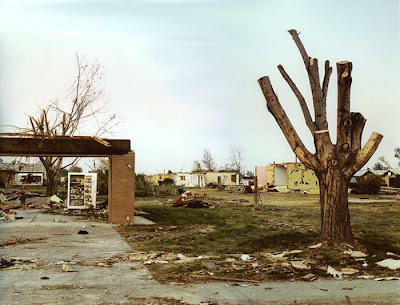 After a Tornado, Grande Isle, Nebraska, June 1980, Joel Sternfeld
And here is the situation as described by The Toledo Blade in an article published June 4, 1980: 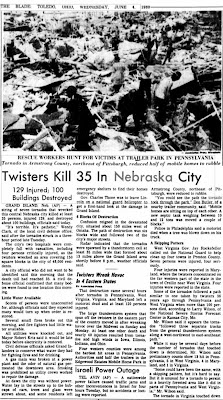 I'll have more Sternfeld photos to follow in the upcoming weeks...
Posted by Blake Andrews at 3:42 PM

I love my copy of American Prospects, I heard Sternfeld talk about it in London once. He explained that the fire brigade were practicing and had been setting fire to that house and putting it out all day which explains the relaxed Pumpkin buying fireman in the foreground, he was probably just waiting for his turn on the hose. Sternfelds talk illuminated a number of other images from the book, he pointed out his little VW camper parked in a car park in one shot and explained his idea of America as a lost Garden of Eden, one shot even includes a hot tub with an apple tree and a 'hose pipe' serpent.

I called the McLean, Virginia Fire Dept. and got a similar story.

The lost Eden parallel is interesting, makes me think of Papageorge working during the same period.