Q & A With Art Paul Schlosser

Art Paul Schlosser is a street musician based in Madison, WI.

Where did you grow up? How did you become involved in music?

I grew up in Madison after we moved from the Chicago area. I got first interested in weird comedy songs by my dad's strange taste in both Allen Sherman and Tiny Tim. My mother continue to influence me by sharing with me other weird songs. My sisters Mary and Sue turned me on to the Beatles and Monkees and I liked the more novelty songs like I Want To Buy Me A Dog and Yellow Submarine. As a very young kid I liked to sing because music was everywhere around me but my sisters told me I didn’t have a good voice. But when I heard Mick Jagger sing I said to myself I could sing if he could. It wasn’t until I was in a theatrical group when I was older and encouraged to write lyrics that I decided to write songs. After my mother gave me a guitar for my 19th birthday I started to write songs. When I was 26 I became jobless and decided to try street performing after watching Allen Hill make money doing it.

What sort of music do you enjoy listening to?

Novelty songs and Comedy songs like Weird Al or other strange stuff on YouTube. Or a lot of woman singers like the group Pomplamoose and Regina Spector

Who are your primary creative influences?

Allen Sherman, The Beatles, The Monkees, Bob Dylan, Tiny Tim, Hank Williams Sr, The Dr. Demento show and all the weird 45s and albums my mom used to play on her record player when I was a kid.


How prolific are you as a songwriter? How many songs have you written and how many do you normally write in a week?

Well, I can make up any song just on the spot. I have over 800 songs on Apple iTunes but I might have over a 1000 because not all my songs are on Apple iTunes. However, some of those are repeats like live versions of the same song or a slightly different version that I decided to record again. I can’t really say how many songs I write weekly because I don’t record all my doodles. Also I could get an idea for a song but may practice it for a while before I record it. I really have to have a recording session before I write down songs.

Have you ever written a song about photography?

I have written two. One is called Smile You’re On Kandid Kamera about the government spying on us and the other will be on my new CD called I Want To See Your Smile. That one is called I’m Taking MY Selfie.

What, if anything, does music have to do with photography?

Language. They are both a form of communicating. They say a picture paints a thousand words. Music also communicates. Music says things we may not  know how to say in words.

Who are your favorite photographers? 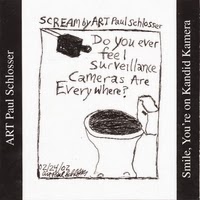 Well I generally don’t like photography as much as paintings or drawings but in the Madison Museum of Contemporary Art on State Street here in Madison they are having an exhibit of Alec’s Soth’s America and I like some of the subjects he took. MMoCA's website has some photos by Alec Soth and tells you a lot more about him.

Another photographer I like is a friend of mine David Hilgendorf who volunteers for Madison Street Pulse, a newspaper I write for. Madison Street Pulse is a paper that helps the homeless make money here in Madison. You can see some of David’s photos on their website.

Why were you drawn to Alec Soth's photographs? What did you like about them specifically?

Well, what happened was MMoCA had a poster outside with one of the weird photos that Alec took so I was curious to see what the other pictures looked like. When I got up there and saw all the interesting photos I wasn't disappointed. I like the fact that he took photos of odd subjects like a Pastor’s wife with a picture of a cloud that looked like an angel, theaters in Texas, pictures of what he ate, and sport drink cans …

What other sorts of photographs do you enjoy?

Usually I like odd subjects and Black N White Photos of people. Or if I don’t know what something is I might type it in Google and look at the images of it.

Why black and white photos? Why not color?

There is a photo show currently at the Madison Library.
Have you seen it yet?

I went to it and like some of it and think it was a pretty good show because it was an eclectic mix of styles and it has been said variety is the spice of life.

What was your favorite photo in the show?

Do you take photographs? If so, of what?

I like to take pictures of my artwork to sell to fans. And Selfies so people can see my weird clothes I find. You can see them in my photo section on Facebook.

I like your photos of artwork. But I'm wondering if you ever take photos of other objects, to have the photo itself be a piece of art. Like Alec Soth photographing a Pastor's wife or something.

I guess that is why I paint. It is easier for me to make a painting look different than real life and it is harder for me to make a photo be real art and not be what I am taking, or is what I am taking art? I mean the line between a photo of something as art or just a photo of something is thinner than the line between just a portrait and an artist painting an artist expression. So I don’t, but I did try it once and I found it not to be my forte.

Do you consider yourself an outsider artist?

Well, if I say yes then according to outsider artist opinion I’m not. I guess what I consider myself is a singer songwriter who likes to write in many different styles including humor, gospel, protest, rap, and children's songs. I just happen to sound really weird the way I sing and the strange subjects I think of to sing about. Hey, but what do you think?

Who do you consider the audience for your work?  Does art require an audience? Or does it mostly exist to satisfy the artist?

I think the artist is also the audience. When I create I find I am usually entertained by what I am creating. My audience is anyone that is open to see what I have to share, plus myself.
Posted by Blake Andrews at 9:58 AM

Watching people watch Art is usually fun. I haven't seen him in a few years, but I don't go downtown a whole lot anymore.