With its call for a new Muslim Caliphate based on strict Sharia law, a series of well publicized civilian beheadings, and a multi-pronged guerilla war aimed against most of Western civilization, ISIS has established itself as a near universal bogeyman across the globe. Whether or not the entire group relishes the role of pariah is open to question, but it has come to apply to all its members. Sadly, even the group's photographers have gotten caught up in the fray.

ISIS: The Happy Years, currently showing at The Ritz Carlton in Dubai attempts to change all that. Drawing from the personal archives of ISIS members, the group show puts the recent run of bad publicity firmly in the crosshairs. ISIS photographers —both professional and amateur—were asked to submit work based loosely based on the theme "Happiness". The submissions were ruthlessly edited into a final grouping of 55, printed and framed locally, and are on display through November 15th, 2014 in the hotel's central ballroom.

The material pulls from an astonishing range of sources. Everything from tranquil desertscapes to Instagram selfies to funny camel teeth to teenage bedroom interiors to post-modern multimedia are represented. Clearly this is not your New York Times' ISIS. It's the new creative ISIS, and the show is meant to carry their artistic flame forward in a spirit of fresh exploration and inquisition.

The bare faced executioner Shakir Wahiyib is a common subject in the show. Abu Ka-Al Qam's friendly snapshot (shown below) is one of the standouts. Qam adopts the Instagram platform to lend his work a grassroots, confessionary air. The reference to Alberto Korda's Che photo is direct yet not heavyhanded. The soft pastel palette and matching beards disarm the viewer's natural skepticism, while Wahiyib's black locks are allowed the freedom to flaunt convention and make the viewer reconsider truly candid forms amid chaotic circumstances. The lettering on Wahiyib's epaulets, written in an unknown script, references Duchamp and Spiegelman. 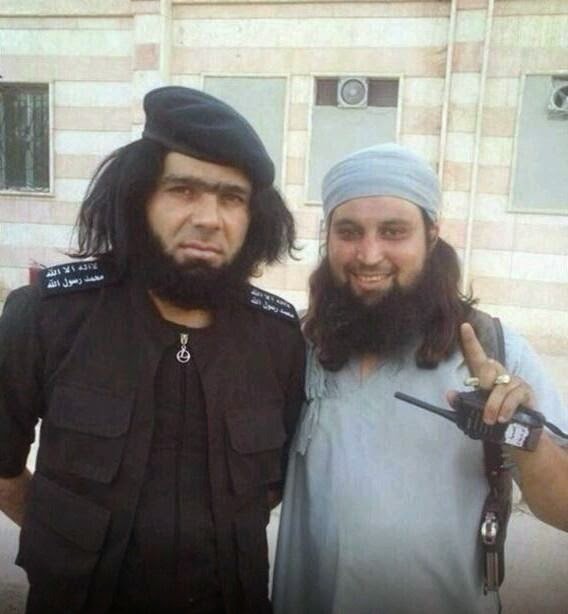 Mohammed Al Ur-Iknit's portrait of Wahayib fronting paramilitary troopers is another favorite (shown below). This photo, displayed wallsize in the ballroom, depicts the brutal warlord in stasis with arms at rest. Ur-Iknit appropriates Baldessarian notions of obfuscation, specificity, and graphic forms in a world of disguise, while paying homage to traditional Islam proscriptions against the graven image. 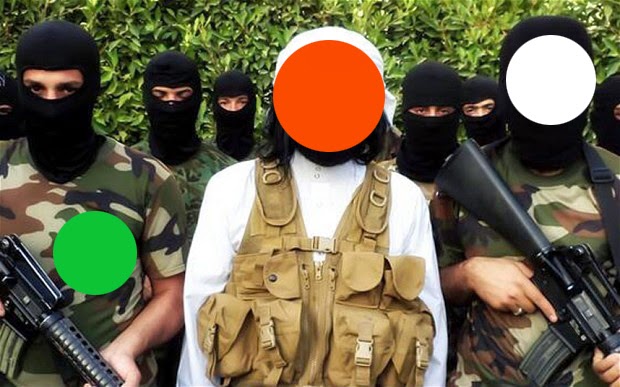 The show contains many such winners. Unfortunately, at least from the standpoint of the show's organizing committee, the timing of recent events could not be worse. Miscoordination among ISIS managers resulted in the exhibition being scheduled just after the group's most recent campaign of unchecked brutal slaughter. It's the same old story. Sometimes within a loose terrorist network, the right hand doesn't know what the left is doing. Trapped behind a seemingly endless series of negative headlines, ISIS: The Happy Years has received very little critical attention to date.

This is understandable, since gaining positive reviews for any artistic exhibition is tough enough. But that task is magnified when the leader of the free world publicly states his intention to hunt down and destroy your group. That's the sort of negativity which has a chilling effect on potential collectors.

Compounding the problem is the partially self-inflicted wound of shifting monikers. Is it ISIS? Or ISIL? Could the group please make up its mind, choose one, and stick with it? Perhaps the lack of clear group label reflects internal dissension. Or maybe it's just a translation problem. Whatever the case, branding is important, and the lack of clear identifying tag threatens to dissipate artistic momentum. For this show at least, the name ISIS appears to have stuck. But one wonders, for how long? For that matter will the group even be around still in 10 or 15 years, considering their universal antipathy, lack of regional allies, and disputed sovereignty. One wonders if some other group might just supplant them eventually, destroying any possible artistic legacy.

The chips may be falling against ISIS. It's safe to say they are not yet taken seriously by the art world. But if the political ambitions of ISIS completely overshadow its members' photographic endeavors it would be a shame, at least in this critic's book. ISIS: The Happy Years is well worth your time if you're in Dubai. Who knows when another show like this will come along?
Posted by Blake Andrews at 1:19 PM